In announcing new demands and threats, Secretary of State Mike Pompeo has made clear that the Trump administration will seek to threaten Iran into submission, says historian Eskandar Sadeghi of the University of Oxford

In announcing new demands and threats, Secretary of State Mike Pompeo has made clear that the Trump administration will seek to threaten Iran into submission, says historian Eskandar Sadeghi of the University of Oxford 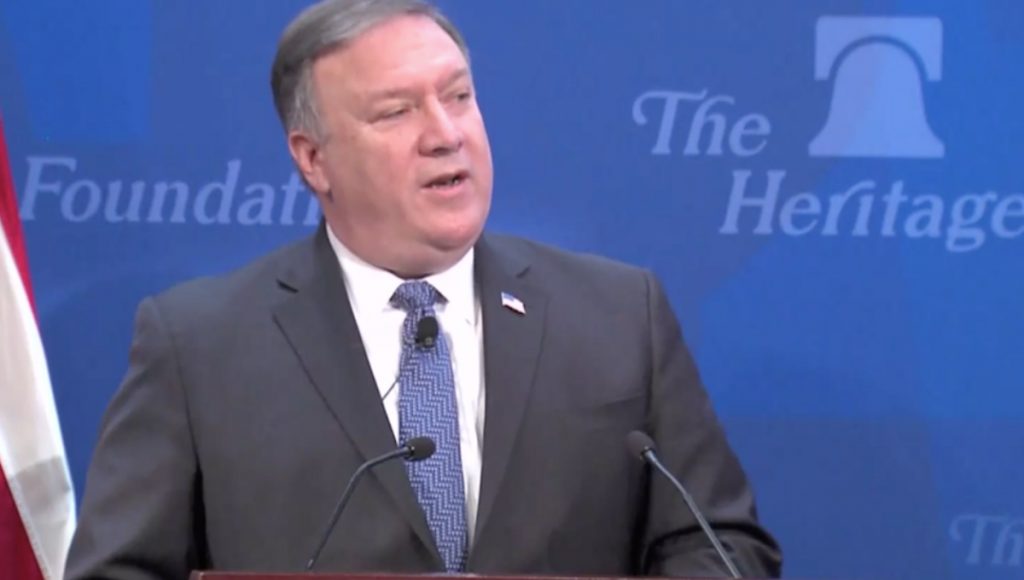 AARON MATÉ: It’s The Real News, I’m Aaron Maté. After withdrawing from the Iran nuclear deal, the Trump administration has unveiled its new Iran strategy. In a speech Monday, Secretary of State Mike Pompeo outlined twelve U.S. demands on Tehran and threatened “the toughest sanctions in history” if it does not comply.

MIKE POMPEO: These will indeed end up being the strongest sanctions in history when we are complete. The regime has been fighting all over the Middle East for years. After our sanctions come in force, it will be battling to keep it’s economy alive. Iran will be forced to make a choice; either fight to keep its economy off life support at home or keep squandering precious wealth on fights abroad. It will not have the resources to do both.

AARON MATÉ: As we just heard, the new U.S. Ultimatum includes a call for ending Iranian involvement across the Middle East, and Pompeo issued that with yet another threat.

MIKE POMPEO: We will track down Iranian operatives and their Hezbollah proxies operating around the world, and we will crush them. Iran will never again have carte blanche to dominate the Middle East. And I remind the leadership in Iran what President Trump said. If they restart their nuclear program, it will mean bigger problems, bigger problems than they’ve have ever had before.

AARON MATÉ: Iran has dismissed Pompeo’s demands and says it’s working with the Iran deal’s remaining members in order to save it. Eskandar Sadeghi is a research fellow in modern Iranian history at the University of Oxford. All right, Eskandar, what did you- what message did you hear in this speech from Pompeo?

DR. ESKANDAR SADEGHI: I just heard a very loud bark, but I’m less convinced that he’ll be able to follow through on quite a few of these threats, to be honest. And it just seems so. You know, via very much a desire to return to the Bush administration era, where very- how can I say, sort of absolutist or maximalist demands were sought to be imposed upon Iran. And it just didn’t work. I mean, it was a flawed policy. And even after the hard- one of the most strenuous sanctions regimes in modern history, under the Obama administration- ultimately, the Obama administration realized that it would have to come to a diplomatic accord.

And similarly, it was also the realization that you can’t just have a win-lose scenario. You can’t have a situation where Washington, as it sees it, gets everything at once, and Iran gets nothing. And the reason why there could be an accord is because you have to give, and you have to get. And that’s the outcome, that is the JCPOA. That is what the JCPOA resulted in, an accord in which, perhaps wasn’t ideal from every party’s vantage point, but nevertheless, it was sort of the best solution that was feasible.

AARON MATÉ: So, part of Pompeo’s speech was directed at the Iranian people themselves. And I want to play a bit more of what he said.

MIKE POMPEO: Here in the West, President Rouhani and Foreign Minister Zarif are often held apart from the regime’s unwise terrorists and malign behavior. They are treated somehow differently. The West says, “Boy, if only they could control Ayatollah Khomeini and Qasem Soleimani, then things would be great. Yet, Rouhani and Zarif are your elected leaders. Are they not the most responsible for your economic struggles? Are these two not responsible for wasting Iranian lives throughout the Middle East? It’s worth the Iranian people considering.

AARON MATÉ: That’s Secretary of State Mike Pompeo. So, Eskandar, he’s trying to appeal to the Iranian people and get them to turn against Iranian foreign policy, and using Iran’s domestic troubles as the argument for that. But my impression of Iranian public opinion, at least from the polls that I’ve seen and just anecdotally from people I speak to, is that actually, when it comes to Iranian foreign policy, there seems to be a plurality of support, as opposed to domestic policy, where the views of the government are quite mixed. Many people are extremely upset with austerity politics, repression, inequality. But on the foreign policy front, that doesn’t seem to me to be something that the U.S. can turn the Iranian people against. Do I have that right?

DR. ESKANDAR SADEGHI: I think you’re definitely correct insofar as the overwhelming, I would say the majority, as we see in polls, as you just implied, do seem to indicate that there is definitely support for Iranian policies. There are various conditions, for instance, regarding Syria. There was significant support- that Iran supports the Syrian government in its struggle against, for instance, Salafi-Jihadi, sort of extremists, as it were. But there was also this idea that once the government stabilized, then Iran should maybe pare back its role in the such. I mean, there is definitely a significant diversity of opinion.

I mean, my impression from hearing Mr. Pompeo’s comments is that they’ve taken certain slogans that were heard in the December-January protests, which hit seventy cities, which did seem to criticize certain policies. And I think that they think that’s indicative of an overwhelming disapproval. Similarly, they want to give this impression to the Iranian people, as far as I can see, that’s Iran is spending extraordinary amounts abroad, and then it’s simply not spending anything at home, which isn’t really accurate or, I would say, truthful representation of the facts, especially when Washington is absolutely implicated in sending billions and billions- selling billions and billions of weapons to the Saudi government, to the United Arab Emirates’ government, and obviously very much fueling the war in Yemen.

So, when you basically have the United States fueling, as it were, very much an arms race- which Iran can’t actually even really compete with, because Iran is under an arms embargo and has been for many decades now, since the revolution. So, Iran can’t even compete with these states in terms of its conventional capabilities. And often, what is dubbed as this “Iranian superpower,” which is sort of overrunning all of these states.

Actually, it’s sort of- Iran’s, more or less, conventional capabilities, which have been developed over many decades now, which really were born in the course of the Iran-Iraq War, which of course, the United States very much supported the Iraqi government of Saddam Hussein at the time. And they even sort of helped- they provided intelligence for the Iraqi state to target Iranian soldiers, which also hit civilians in various parts of Southwest Iran. And so, many people are living with the consequences of that until today. So, I mean, this sort of idea that Iran is spending these huge amounts of money on weapons and arms is because it very much feels under threat from the United States.

AARON MATÉ: All right. We’ll pause there and come back in part two. My guest is Eskandar Sadeghi, research fellow in modern Iranian history at the University of Oxford.

February 11, 2020
Sign Up for Our Newsletter
Help Us Make Real News!