Most of the thousands killed in Philippine President Rodrigo Duterte's violent war on drugs have been poor addicts. Ex-lawmaker Walden Bello discusses how the middle class is the social base for far-right movements

Most of the thousands killed in Philippine President Rodrigo Duterte's violent war on drugs have been poor addicts. Ex-lawmaker Walden Bello discusses how the middle class is the social base for far-right movements 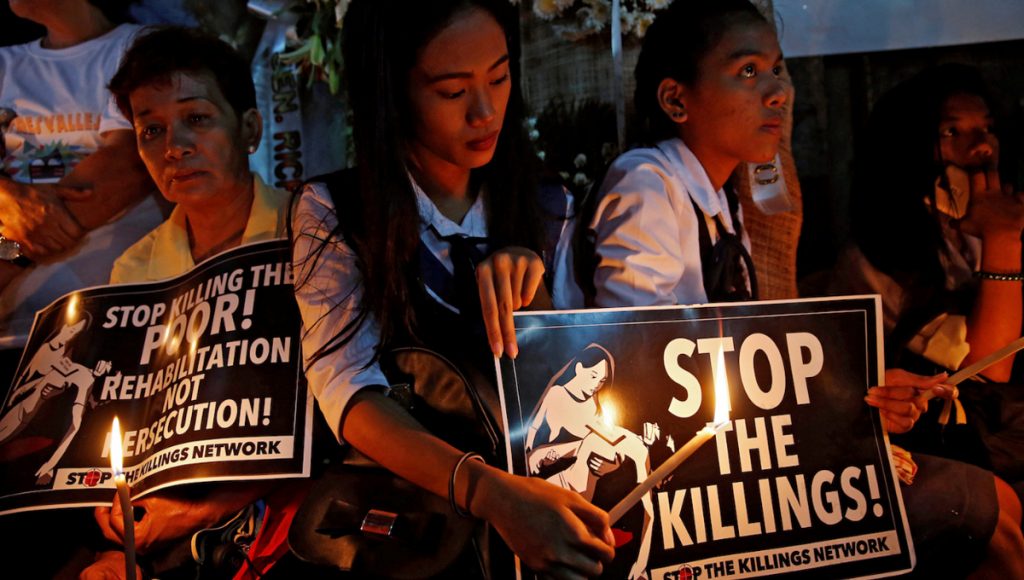 BEN NORTON: Finally, here, I want to conclude with a kind of brief discussion of why you think Duterte is targeting, as you mention, poor drug users. You mentioned that many of the rich drug dealers have not been targeted by this so-called war on drugs. And many of the people who have been killed, thousands who have been killed, have been poor drug users. Why do you think that, you did say that Duterte is using these, you know, drug users as a kind of political scapegoat to justify carrying out all these forms of political repression. If, let’s say he were to make the argument that, OK, well, we need to get rid of these drug dealers in society, to make society safer, to reduce the drug problem, et cetera. Regardless whether or not you agree with that, I mean, I certainly don’t agree with that argument. But why, that seems like a much more justified argument than targeting poor drug users. So why is he going after them?

WALDEN BELLO: Well, let me put it this way. What I’m saying is that he has dealt with the big drug dealers much more leniently, you know, he, you know, basically if they agree to his terms, in which he’s trying to frame up people like the former Justice Secretary Leila de Lima. Then he’s nice to them. But what I guess what I’m trying to say is that the brunt of the attacks on lives has been on the poor.

Now, this is something that’s quite disturbing, because I, and we really need to look at this fairly closely, because this scapegoating drug users, scapegoating criminals and basically saying they have no rights, unfortunately a lot of the people, a lot of people in the middle class fall for this. That, that basically he’s sort of, you know, he has sort of, you know, come up , brought up this, this appeal to this sense of fear. This, you know, against crime. And I must confess that this is part of his popularity, why he retains popularity ratings up there, because basically he appeals to this middle class fear of crime. A fear that basically they say is, oh, well, they’re just people who disrupt peace and security in the first place, and therefore Duterte is right in, in doing this to them. And if you say to people, well, what about, what about due process? I mean, you can’t, you can’t just kill people, that sort of thing. And basically the response is that, well, you know there’s collateral damage and that sort of thing. But it’s good that he’s getting rid of crime.

So I guess I’m really pointing this out because let’s not underestimate the way that, you know, the middle classes, you know, in developing countries, in many areas of the world, have, have moved away from being supporters, supporters of democracy and due process and civil rights, to becoming a mass base for, for fascism and racism, and anti-immigrant sentiment. So I think, you know, this, this appeal to the middle class fear of crime to enable him to become popular and move towards an authoritarian agenda is something that we really need to understand very closely at this point in time. And, and we, we, we really need to look at this political economy of fear that authoritarian figures like Duterte sort of cultivate so that they scapegoat people, on the one hand drug dealers, I mean, drug users. In another case, immigrants. In another case, you know, a group of people, another ethnic group.

So these are classic. You know, these are classic authoritarian tactics that are being used. And I have to say that when people like me and others say, hey, you know, you can’t violate human rights. You can’t, you can’t just do away with due process, that everybody has human rights, and especially the right to life, unfortunately, and this is really terrible at this point, that kind of argument is, is losing its ground with many people, and especially people from the middle class and from the elites in, in countries like the Philippines.

BEN NORTON: Yeah, this is a very interesting point. Frequently in the U.S. we’ve heard this, this rhetoric that the supposed voting base for Donald Trump is the white working class. I mean, I don’t like that term, because the working class is international, it’s not white. It’s, you know, it’s not isolated to one particular racial group. But actually, if you look at the numbers, if you look at the people who voted for Trump, it was largely college-educated whites, middle class, and specifically upper middle class whites. What we would call the petite bourgeoisie. And it seems like you’re saying a very similar thing about Duterte in the Philippines, that these far-right populist movements are actually not based in working class movements, they’re based in petty bourgeois, upper middle class movements? Do you think that that’s an international phenomenon, and can you expand further?

So I think we need to also point out that, you know, that there, you know, that we, I think it can be not realistic to say that it’s just purely middle class people, because he does have some support, also, from the lower classes. And I think that, you know, if we, if we look, if we therefore use this, this idea of passive and active consensus, you know, then we can have a better understanding of the dynamics of support for right-wing movements in the, you know, among, in both countries like the United States, as well as countries like the Philippines. The middle class, you know, has been one of the classes that has been not so much studied by sociologists or political scientists, but now that we’re, we’re beginning to see these big authoritarian movements that remind us of classical fascism, and the way the petty bourgeoisie was the base of fascism, to the point that a guy like Nicos Poulantzas, for instance, you, know, a very famous Marxist scholar, would, at some points in the history of Italy and Germany during the 1930s, he would even say that their ruling class became the petty bourgeoisie. Just to, just to give you a sense of the dynamics of, of the popular fascism to this stratum of, of people.

So we’re, we need to understand this, we need to understand the middle class, we need understand why they become such active supporters of fascism, and how they can easily desert liberal democracy or social democracy when the, you know, when the situation, when, when it happened, when things change. We also need to look at more closely the relationship between working class and right-wing parties, because in Europe, for instance, at this point in time, a lot of the support for the right-wing parties, unfortunately, are coming from, you know, the working class who are deserting the social democratic parties for a number of reasons.

BEN NORTON: Well, we’ll have to wrap it up there, unfortunately. But thanks so much for joining us. Here at the Real News we were joined by Walden Bello. Walden is the author of several books on U.S. relations with Asia. He is also a former member of the Philippine House of Representatives, and he is currently a visiting professor at the State University of New York Binghamton. Thanks so much for joining us.

Walden Bello is a Former Congressman, serving three terms. He resigned owing to differences with the former administration of President Benigno Aquino, including Aquino’s close relationship with the United States. He co-author two joint resolutions seeking the termination of the Philippines’ Visiting Forces Agreement with the United States.

Racism in America, Socialism, and Medicare for All Dominate Democratic Debate (1/2)