No Israeli city is facing closure, even though the coronavirus is more widespread in Israel than in Palestinian cities. The Israeli siege has protected the Gaza Strip from coronavirus so far, but what if the infection crosses the fence?

No Israeli city is facing closure, even though the coronavirus is more widespread in Israel than in Palestinian cities. The Israeli siege has protected the Gaza Strip from coronavirus so far, but what if the infection crosses the fence? 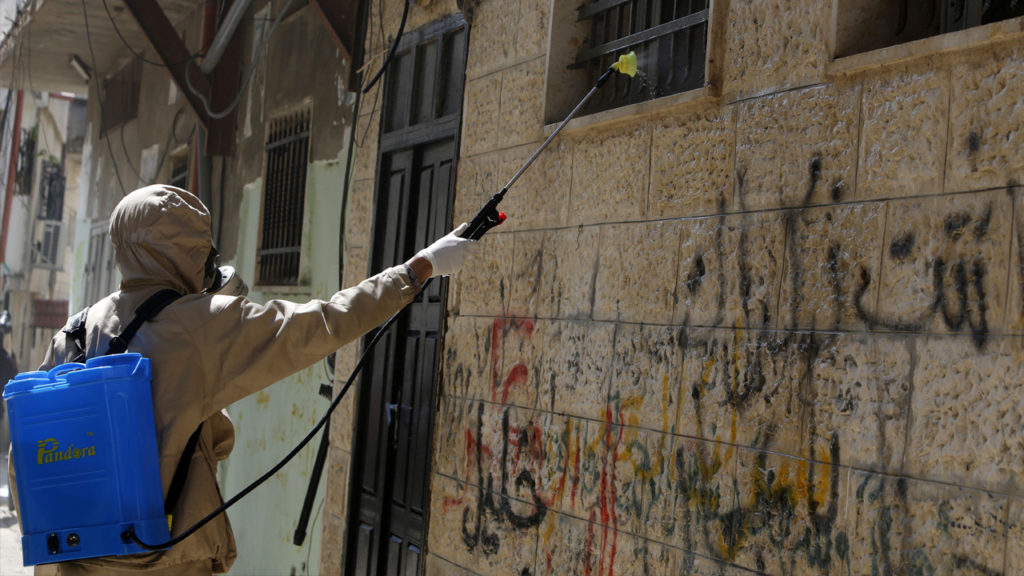 Kim Brown: Welcome to The Real News. I’m Kim Brown. Has the Coronavirus been exploited for populistic political gains? Has the fear of infection been harnessed to incite hatred against people of certain nationalities, race or religion? In one place it certainly has, in Israel, Palestine.

As of Tuesday, there were 50 confirmed cases of Coronavirus infection in Israel and 25 in Palestine. Israel closed the borders, announcing no incoming flights will be allowed to land starting on Friday. Over 70,000 people are kept in quarantine inside of Israelis’ borders.

Now, quarantine is one thing, but the inhumanity of ongoing apartheid is quite another. Last week, a 10-year-old girl named [Muriel 00:00:49] died of cancer in a hospital in the occupied West Bank. She died alone because her parents who live in another part of occupied Palestine in the Gaza Strip were not allowed to be by her side.

This week, the Israeli government put the entire city of Bethlehem under lockdown, claiming that the reason is the Coronavirus, but cities in Israel with Coronavirus cases have not been closed. And also this week the Israeli government announced a new road which they call a “sovereignty road” to serve only Jewish Israelis and connect illegal colonies deep in the West Bank with each other in order to prepare the ground for annexation.

And today we are now joined with Rifat Kassis. He is the director of GRIP Consulting Company. He’s also founder of Defense for Children International, the Palestine section; and the coauthor of the Kairos Palestine document; and he’s also the general coordinator of Kairos Palestine and Global Kairos for Justice Movement. In addition to being an author, he’s published two books and has contributed to 16 others. He joins us today from just outside of Bethlehem.

Rifat, good day. Thank you so much for being here.

Rifat Kassis: Thank you for hosting me.

Kim Brown: The Palestinian government actually announced that it will not allow tourists to enter, although it doesn’t really have the ability to control its own borders. Is this something that Palestinians can actually enforce in order to control the infections and preclude outsiders from spreading the coronavirus further?

Rifat Kassis: Actually, the Palestinian authority doesn’t control any of the borders entrances or exits. Everything is monitored and controlled by the Israeli authorities. But having said that, last week it was a real crisis in Bethlehem because there was some infected cases which created a lot of fears among the people. The infected cases actually they came from hotels, which hosted tourists in the past week. This was maybe one of the reasons why they are trying to stop entering tourists to Bethlehem.

But in general, and as I said earlier, they are unable to control the influx of tourists coming from abroad. It’s everything is in the hands of the Israelis. So if the Israelis will stop the tourists from entering, then of course Bethlehem will not be able to have any tourists. But what I’m trying to say that the issue is real and people are frightened in Bethlehem.

Kim Brown: Countries with 20 times more cases of infection like Germany have not undertaken such extreme measures of restricting the freedom of movement, the freedom of assembly as the Israeli government has taken. In your opinion, are there connections between the way Israel fortifies itself with building walls, fences, checkpoints, et cetera. Is that mentality seeping into the very way that Israeli society sees the world, and starts thinking of separation and isolationism as a policy to deal with not just all problems but health problems as well?

Rifat Kassis: Yeah. I mean, Israeli policy in the West Bank and Gaza, it was this way all the time, isolating us, trying to create [inaudible 00:04:52] in the West Bank. And if I want to talk about Bethlehem, Bethlehem was all the time targeted by such policies. Israel tried to isolate Bethlehem for the past 30 years in a very intensive way. They introduced this permit regime that we cannot take exit Jerusalem without a permit, and this had isolated Bethlehem from its twin city, Jerusalem. And I think this was maybe one of the few incidents in the history of Bethlehem that Bethlehem was completely disconnected.

And definitely, today, I mean, this corona thing, it comes as a good reason for them to intensify the isolation of Bethlehem from the rest of the world. What I’m trying to say, Bethlehem was all the time targeted and of course this corona. And as you said it earlier, sometimes regimes, they use medical issues to highlight their policies and to intensify it.

Kim Brown: Which is ironic because more cases of Coronavirus have been found in Israel rather than in Palestine, so this is just a reason, as you said, for the Israeli government to be more cruel into enact more stringent policies upon the Palestinian people.

But Rifat, you live in the West Bank. But the Gaza Strip, also part of Palestine, has had a very different experience with the coronavirus. We’ve seen Gazans make jokes on social media that the Israeli siege has protected them from the coronavirus. And there are two million people living in effective quarantine; and indeed so far, no cases of coronavirus infection were detected in Gaza. But if one person brings the coronavirus to Gaza and it starts to spread, in your opinion, what do you think is going to happen?

Rifat Kassis: Yeah. Well, I mean, Gaza was under quarantine for the past 12 years. It’s sealed off completely. And as you know, Israel just besieged Gaza and everything again. It’s logged off and any anything will go out or in from Gaza, it needs permits from Israel. Maybe this had protected Gaza so far from having the virus. But as you say, if one case coming from Egypt for instance, or from Israel, I think it will be a disastrous situation in Gaza and it will be even heavier than in the West Bank given the long siege around Gaza.

And Gaza lacks everything. Lacks medicine, lacks stocks, lacks goods, lacks food, everything. And as you know, Gaza, according to many United Nations reports, Gaza is unlivable in a few years. The water is polluted. If the virus will spread in Gaza, God forbid, this means a disastrous situation for the people of Gaza because Gaza is very much in need of all… I mean, even without this corona thing, Gaza was in complete in need of everything.

Kim Brown: Indeed, we’re looking at a pretty tenuous situation for a vulnerable population susceptible to the spread of this tragic disease that has become a pandemic according to the World Health Organization. Do you believe that Israel will help its neighbors in any way if the coronavirus becomes an epidemic in Palestine? Will they step in perhaps for their own self-interest to preclude the virus from spreading in the region?

Rifat Kassis: I mean, to be realistic if the virus will spread in the West Bank, Israel also will be touched because there are some certain places where there are… I mean, integration like in for instance in Hebron. The settlers, they live in the hearts of Hebron. They are connected to Palestinians, at the checkpoints, the soldiers, the settlers in the West Bank.

And on the other hand Israel has all the time, its plans to continue fragmenting the West Bank. And if there is any way to fragment West Bank more, they will do it. So they are now in between. First they want to stop this virus, but on the other side, I think their political plans will continue.

Kim Brown: Indeed. We have been speaking with Rifat Kassis. He is the director of GRIP Consulting Company, also the founder of the Defense for Children International, the Palestine section. We’ve been speaking about the steps that the Israeli government has taken in defense of the coronavirus. However, there are more documented cases of coronavirus in Israel rather than Palestine. And yet the clamping down on Palestinians has grown more intense with the spread of this disease. Rifat, we want to thank you so much for taking the time to speak with us. Thank you.

Kim Brown: Thank you for watching The Real News Network.

April 1, 2020
Sign Up for Our Newsletter
Help Us Make Real News!