Frédéric Penard discusses the efforts of small NGOs to rescue refugees crossing the Mediterranean, against the efforts of European governments to block the entry of people fleeing war and famine

Frédéric Penard discusses the efforts of small NGOs to rescue refugees crossing the Mediterranean, against the efforts of European governments to block the entry of people fleeing war and famine 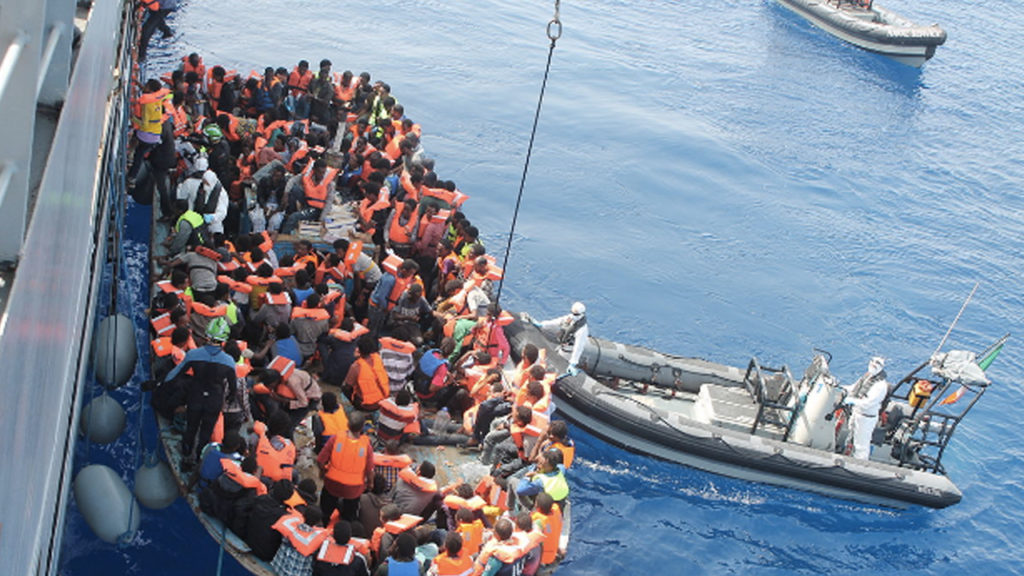 A ship with about 250 refugees from sub-Saharan Africa sank off the coast of Libya last week, drowning as many as 150 of them. This makes the shipwreck the deadliest such incident so far this year. However, it is just one story out of many. In 2017, 3,100 refugees died and in 2018 1,600 died trying to cross the Mediterranean to reach Europe. The UN calculated that one refugee dies for every eighteen that make it across. These very grim prospects, however, are not stopping people who are fleeing almost certain death and famine and war, and who have no choice but to take the chance, leaving everything behind to reach Europe. Here’s what an Eritrean survivor of the shipwreck off of Libya had to say about his experience.

GREG WILPERT Italy’s right-wing Interior Minister, Mateo Salvini, recently closed Italy’s ports to all refugee ships trying to dock in Italy. The Salvini government has even gone so far as to arrest the captain of a rescue ship, Carola Rackete, of the organization Sea Watch. Meanwhile, various European Union countries, including France and Germany, have come to an agreement recently to take more refugees that are trying to cross the Mediterranean.

Joining me now to discuss the situation of refugees in the Mediterranean is Frédéric Penard. He’s a humanitarian worker who has been engaged in various international NGOs around the world over the past 20 years and is now Director of Operations of the European search and rescue organization, SOS MEDITERRANEE. Thanks for joining us today, Frédéric.

GREG WILPERT So tell us about the organization SOS MEDITERRANEE. Exactly what do you do and what kinds of obstacles do you encounter in your work?

FRÉDÉRIC PENARD So SOS MEDITERRANEE is an organization from the civil society of Europe that was founded a few years ago. And like many organizations, we were founded in our case by sea farers because we found that the inaction of European states on their southern border was unacceptable. That people drowning at sea should not happen in the 21st century. So that’s why we gathered our strengths and founded the organization to actually save lives at sea, which is something that has been going on for centuries that sea farers do on all oceans and there should be no different in the Mediterranean Sea.

GREG WILPERT And what kinds of obstacles do you encounter in your work right now and specifically in this case of trying to rescue people who were trying to cross the Mediterranean?

FRÉDÉRIC PENARD The difficulty today in the Mediterranean Sea is that states are shifting away from their responsibilities. There’s been maritime conventions that have been going for decades now and the states do not respect actually what the maritime conventions demand. Maritime conventions are very clear. They say any captain has the duty, has the obligation, as far as it is safe for his ship to provide assistance to any person found in distress at sea. This is what we are doing. This is what the commercial ships are doing. That is what coast guards are doing on all seas of the world. Look, the captains have this duty and the state. In their globality, they have a shared responsibility to provide a solution for the captain to be relieved of the burden through the state of having the survivors onboard. And the problem is that nowadays European states, they don’t do proactive search and rescue and they don’t provide for the safe haven, for the safe port that is their responsibility under the maritime convention. So the biggest issue we face is that a rescue ship, when they do rescue, they are not allowed to go to a safe port like the maritime convention would demand. And this, we press then long discussions and long diplomatic discussions in between states to finally agree to have some kind of agreement to allow the docking of the ships.

GREG WILPERT It kind of reminds me of the situation of the Jews who tried to escape World War II, particularly the MS St. Louis was a very famous case where they had to go to various ports— 900 people I think— and eventually had to return to Europe. But clearly, in this case, the Italian government is vehemently opposed to your work, arguing that you’re assisting human traffickers and incentivizing the passage from Libya to Europe. What is your response to this accusation? And how have some of the other governments that you deal with responded to your work?

FRÉDÉRIC PENARD The pull factor is something that has never been proven. That is not a factor. It’s just fake news that has been going on and on to discredit the work of the rescuers and humanitarian NGOs. Unfortunately, the real example of that, the fact that the pull factor doesn’t exist, is the fact that nowadays there’s very little NGOs at sea or sometimes no NGO at sea because they are blocked. They are being criminalized. And still, people are fussing because there is no pull factor. There’s a push factor. It’s the situation in Libya that pushed the people out on these very unsafe boats or pieces of rubber on which they take great, great risk to cross the Mediterranean.

And this is not because there is the possibility that they are going to be rescued because at the moment there is very little possibility for people to be rescued. But there is a real push factor from the situation in Libya. So this is a way to undermine our work. And this is, yes, one of the best challenges that we are facing now to try to deconstruct the fake news and that narrative against the work of NGOs. We are just there to do the — to stabilize the sea and to take people on a safe shore. Then the rest is another issue that states could deal with, but we don’t — we cannot leave people dying at sea. This the first step. This is the first duty, the assistance of people in danger.

GREG WILPERT Now, how do you see the responsibility of European governments for taking in refugees? I mean, is it mainly an issue of more responsibility to take in people in need, as you mentioned at the beginning? Or is there more involved in terms of the European responsibility for the causes of migration, such as climate change or war in Africa?

FRÉDÉRIC PENARD The pattern is complicated. Why do people cross seas is always complicated. This has been going on for years and this is far beyond and far more complex from what an NGO can state. What is the primary responsibility before trying to solve the other problem is to try — is to respect that duty to assist people in danger and to provide them with a safe haven. And in that, the European states have been failing. They’ve been failing. They’ve been failing in their solidarity because they’ve been leaving [inaudible] states in Europe facing that situation quite alone without solidarity.

The backlash of that is what we see now with the policy of Italy of closing the port. And what we need is a virtuous circle of good willing states trying to establish just the necessary solidarity within themselves to organize that very minimal effort, which is completely possible for a continent like Europe — is to organize a safe system for people not to be dying at sea and to be rescued when they need to be rescued. Then the rest, I mean, obviously there is a whole need of things to tackle the roots of this migration. And, first of all to tackle the issue of the conflict in Libya, which is the one pushing people out at the moment.

GREG WILPERT Okay. Well, we’re going to have to leave it there for now. I’m speaking Frédéric Penard, Director of Operations of the European search and rescue organization, SOS MEDITERRANEE. Thanks again, Frederic, for having joined us today.

Frédéric Penard is a humanitarian worker who has been engaged with various international NGOs around the world for the past 20 years. He is now the Director of Operations of the European Search and Rescue organization SOS MEDITERRANEE. Frédéric Penard was on board the Aquarius in June 2018, experiencing the first of many standoffs that…