The GM plant in Oshawa has shrunk from 23,000 jobs in early 1980’s to 300 today.  Taxpayers bailed out GM to save jobs and productive capacity. A democratic just transition that saves the community and the jobs are possible, says former Assistant to the President of the Canadian Autoworkers Union, Sam Gindin

The GM plant in Oshawa has shrunk from 23,000 jobs in early 1980’s to 300 today.  Taxpayers bailed out GM to save jobs and productive capacity. A democratic just transition that saves the community and the jobs are possible, says former Assistant to the President of the Canadian Autoworkers Union, Sam Gindin 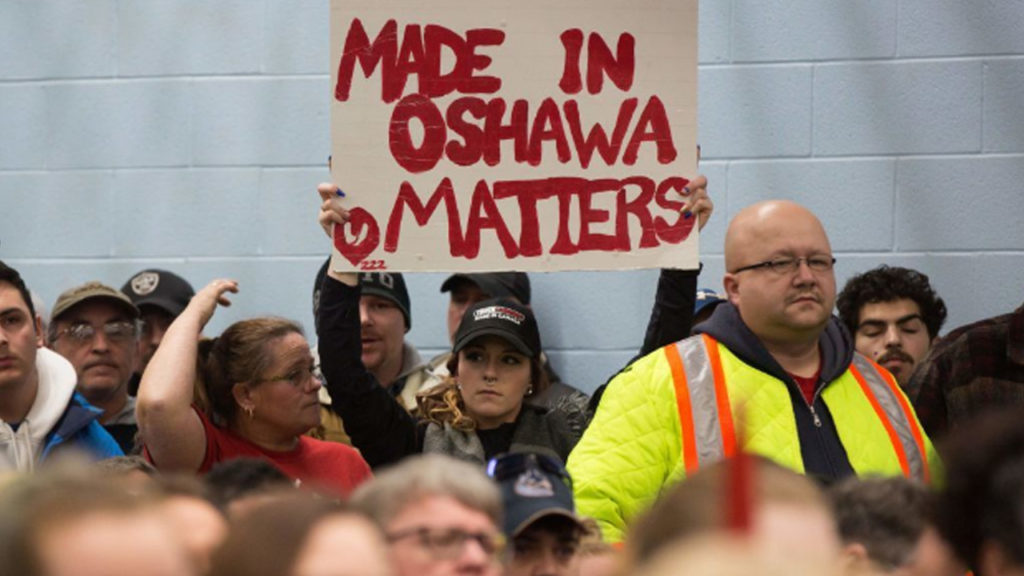 SHARMINI PERIES It’s The Real News Network. I’m Sharmini Peries coming to you from Baltimore. In the mid-1980s, General Motors Oshawa was the largest auto complex in North America with three assembly plants turning out some 750,000 vehicles annually, while manufacturing its own axles, batteries, and radiators. Today, the Oshawa plant and the City of Ottawa is in survival mode. On to talk about what happened is Sam Gindin. Sam Gindin is the former assistant to the President of the Canadian Auto Workers union. He is the co-author with Leo Panitch of the book The Making of Global Capitalism: The Political Economy of American Empire. Good to have you here, Sam.

SAM GINDIN Great to be here.

SHARMINI PERIES All right, Sam. Let’s start off with what happened to Oshawa, going from this, you know, robust city in the mid-80s as an auto-manufacturing city—What has happened?

SAM GINDIN Well, first of all, it’s something that’s happened to the North American industry as a whole in terms of the Big Three— GM, Ford, and Chrysler. Since the late 70s, about 80 percent of the membership, the auto union membership, of those companies has disappeared. In Oshawa itself, there were 23,000 workers back in the early 80s. Going into the last round of bargaining in 2016, there was one plant left with about 2,300 workers. In that round of bargaining, the company threatened to not bring a new model in, and the union made very significant concessions, especially for its younger members, in order to save the plant. Then after that was done, after the concessions were made, shortly thereafter in November of last year, GM announced that there wouldn’t be a model for this plant, and it would close. The union launched a PR campaign to try to save the facility. There were also, at the same time, about four facilities in the US that were threatened. Recently, the union got an agreement to save 300 jobs, so that’s, kind of, where we stand now.

SHARMINI PERIES Now, Sam, help us understand because GM says that they have to go where the markets are going, that they had originally planned to shut down eight plants worldwide including four in the US. Now this is what they need to do in order to survive. What’s wrong with this picture. OK so that is number two and the rest is fine.

SAM GINDIN Well, what was wrong with it is that it’s incredibly undemocratic that corporations have this control over everything that happens in our lives, our jobs, our communities, and that dependence has meant concessions for workers. It’s meant insecurity and it’s also meant to taxpayers, bailing out these companies when they’re in trouble. The message here is that this road of hoping that this will somehow be the salvation, that we can just depend on these corporations for the future, is what’s really being challenged here. You look at this and you say, well where are things going? One of the questions to ask in the Oshawa facility that we’ve been talking about with workers there is look, you’ve got this facility that can still make all kinds of things. It’s got the equipment. The suppliers nearby have the equipment and the flexibility. The workers have the skills. Why can’t we make something else there? Save the jobs and maintain a productive capacity. In terms of what to make, the obvious point again is that if we’re serious about the environment, everything is going to be changed in the future— how we live, how we work, how we travel— so why don’t we start making things here that are positive and contribute to dealing with the environmental crisis, like electric vehicles, that this plant can make?

Now, to do that raises some very radical questions because to pull that off, you’d have to say, we don’t want to think in terms of corporate profits. We actually want to think of our planet. We don’t want to think about competition. We want to emphasize social use and social benefits. This is a calculation that the corporations aren’t making. They’re doing this in terms of their own interest and that’s the question of, can we change this, and can we use this as an example for this change? There’s a lot of talk in both Canada and the United States about a green deal, but it’s very abstract when you promise workers that their facility might be closed but they’ll get a just transition. Well, it’s not very credible if the corporations control what happens, so we have to start thinking here about an alternative. The alternative, in this case, is to put this under public ownership, perhaps under control of the municipality, have major investments which would require the federal government, and actually start planning— both for the environment and for maintaining a manufacturing capacity that can address the material needs that fixing the environment will require.

SHARMINI PERIES All right, Sam. You said something very interesting earlier in that answer and that is that the taxpayers have bailed out not only GM, Ford, a number of other companies, in order to save jobs. Here we are years later, back in the same situation of having lost the very jobs that the taxpayers had bailed out the companies to save. Now, you’re also saying something very interesting here, which is public ownership. Now, how much of these companies still owe the taxpayer, and then, what does public ownership look like?

SAM GINDIN Well, a few things there. I mean, I’d really—In terms of the bailout, when GM was in trouble, it got major bailouts from the United States and from Canada. It paid back some of that, but it’s still short some $3.7 billion in Canada that it hasn’t paid back. It also got massive concessions from the workers, so it wasn’t just the taxpayers in general, but I’d argue beyond that is a question of democracy anyways. Even aside from the taxpayers, and aside from concessions, the question comes down to, why should the corporations have this right? In the past, the argument was, well they’re delivering the goods. They make the profits, their executives make these incredible salaries— hard to believe salaries— but in the end, we get jobs and the community develops, but now what we’re seeing is it doesn’t work. The degree of inequality everywhere across the economy has increased so dramatically, and people are incredibly insecure when unemployment rates are low because of the restructuring that’s going on and because a lot of the jobs aren’t great jobs.

So, the point of public ownership is an attempt to democratize this, to say that the public has a stake in this, the public has an interest in this. This seems to be the only way of actually trying to deal with this, but we have to make sure that the public ownership isn’t the kind of public ownership that we’ve had before where the government takes the risks, the workers have very little input, and in the end, you know, they only try to fix the plant so that it can privatize it again and that’s what we don’t want. We want something that can actually be a model. It can be a model of workers getting active to fight for jobs, fight for the future of the country, and to address the environment instead of a lot of people thinking that workers are a problem in terms of the environment. This is a chance to demonstrate something differently and it’s a chance to show that there’s a different kind of public ownership, which involves the community, which has a special role for the workers, and really addresses, you know, the incredible social needs that we face.

SHARMINI PERIES Sam, there’s a number of studies that have been done about how just transition to the very suggestion you make here, which is to a Green New Deal, could look like. In fact, there’s been cost-benefit analysis done where retraining workers, giving them some compensation while they are being trained, can be eased into green jobs. Tell us a little bit about that because I know the postal workers and other good people in Canada have been actively working on these plans. What do they actually look like? It’s hard for some people to, sort of—You know, some of these concepts are abstract and it’s hard for us to envision what that could look like.

SAM GINDIN Well, it’s very hard for workers to envision a lot of this too because they don’t see themselves as having the power to do this. The problem with, you know, there’s been some very creative things done on paper. There’s been some very creative proposals, especially by the postal workers in terms of starting to convert the economy and having a just transition. The problem with it all is that it is just on paper. The point is that you can’t just see this as policies. Unless you’re ready to challenge the power of corporations and limit what they can do, or control what they can do, or run it yourselves, then this isn’t going to happen. To really make a green deal happen does mean you have to start thinking about really democratizing power, which means that public ownership might be one way. Other forms of regulating corporations might be other ways, but if you’re not going to talk about that, it’s going to remain something that is abstract.

What it means in the concrete is that we actually say, what kind of a future do we want, how we’re you going to deal with the kind of society we want, how we’re going to deal with jobs for our kids and our grandkids, how we’re going to retain a manufacturing capacity. So, even if we have a plan of what we can do, we can actually do it because the technology and the manufacturing capacity actually resides here, rather than has been destroyed or moved, and that’s what a green deal is about. It’s saying that the environment is the biggest crisis we face, that it isn’t going away. It isn’t going to go away with gimmicks. It isn’t going to go away with just trying to manipulate the market in some way. It’s going to require massive structural change that requires planning and we all have to think about this, and we all have to think about how radical a change this is actually going to mean in terms of power in this society, and that’s the question— are we ready to take that on?

SHARMINI PERIES And thank you for joining us on The Real News Network.

The Autoworker Strike Is Over. Did GM Just Win?