Venezuela’s opposition has a long history of burning government buildings, health clinics, and the local headquarters of the country's social missions. The violence continues, but these acts of opposition violence are rarely covered in the press.

Venezuela’s opposition has a long history of burning government buildings, health clinics, and the local headquarters of the country's social missions. The violence continues, but these acts of opposition violence are rarely covered in the press. 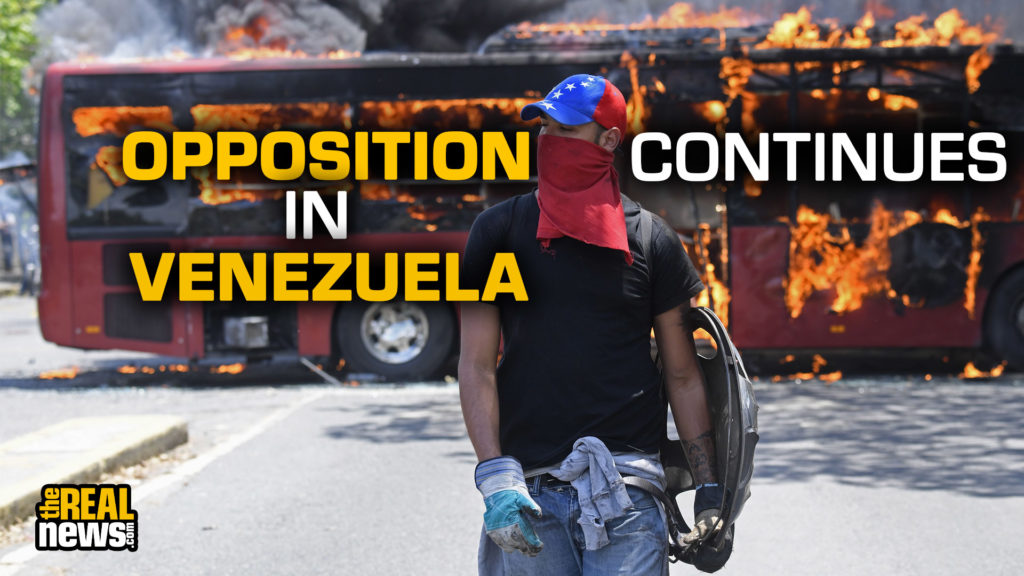 Mike Fox: On the evening of February 8, a warehouse belonging to Venezuela’s National Telephone Company, Cantv and its affiliate Movilnet, was set on fire in the state of Carabobo. According to the Venezuelan government, all of the equipment there was destroyed. The government denounced the attack as an attack of sabotage and terror.

For those not following Venezuela closely, this may seem a strange occurrence, but in fact, ongoing violence and attacks by the U.S.-backed opposition are quite common in Venezuela, although you rarely hear about them in the mainstream press.

This was the scene last year, on a random weekend in Caracas, at the local headquarters of the United Socialist Party of Venezuela in the working-class neighborhood of San Augustin.

Marvi Devia, Resident: At about 3am, we smelled some very thick smoke. And some neighbors realized that they were burning tires. So we ran downstairs, with fire extinguishers, and we were able to put out the fire. But 21 families live here and we have little children and grandparents. So it was very scary to be in this situation.

Mike Fox: Those responsible were not caught, but they left threatening fliers, demanding Maduro’s removal.

This was far from the first time.

Venezuela’s opposition has a long history of burning government buildings, community health clinics, and the local headquarters of its social missions. Such incidents happen continuously, but flared up particularly during the opposition’s months-long street blockades, known as “guarimbas,” in 2014 and 2017.

On the day of the failed April 30 coup, last year, by opposition leader Juan Guaido, members of the opposition raided this neighborhood center, in the working class Caracas barrio of Caricuao, where numerous social offices and community programs are held.

The forces behind these violent actions are the same, linked to Juan Guaido, who was recently heralded by both U.S. president Donald Trump and House Speaker Nancy Pelosi as a democrat and a freedom fighter.

Acts of opposition violence are rarely covered in the press. What is covered, often ad nauseum, are the pro-government collectives from 23 de Enero, a working class neighborhood, and long-time bastion of support for the Bolivarian process.

The opposition and most mainstream outlets says these collectives are armed and dangerous — shock troops at the service of the governments.

Jose Lugo, from the Alexis Vive collective, says they have it all wrong.

Jose Lugo, Alexis Vive: If it’s alright, let me take you to our weapons facility. Come with me, please. I am going to show you the weapons park of the collectives.

Here we have the area where we cut the pieces of the collective. We are making shirts. Shirts for our country’s boys and girls.

Over here, [indicating a sewing machine] we have an AK47. Oh, sorry, this is a 757K, which is a machine that is called Overlock.

Over here, we have another weapon [indicating another sewing machine]. It’s a 757K. This fires almost 500 projectiles per second. Can you shoot it, Margarita? She’s firing.

Mike Fox: This sewing collective is just one piece of El Panal commune, which was founded by the Alexis Vive collective over a decade ago.

This is part of the social and economic development. This is a court we built with our own resources, thanks to the effort of Alexis Vive. This collective of assassins made this court here.

There’s also a communal bank and a community radio.

Lina Arregocés, El Panal Border Studies and Research Center: Wherever we go, we are spreading the word. We have a local research center and a radio through which we share information. And this information isn’t for the libraries and the intellectuals. It’s knowledge for the people.

There is no difference.

Mike Fox: Down the hill, the collective as the Coordinador Simon Bolivar took over a former police headquarters and interrogation center and converted it into a neighborhood center.

Juan Contreras, Coordinador Simon Bolivar: This is the Francisco Miranda community school of modern languages. Here is the infocenter, with more than 30 computers. A community bookstore. The local civil registry office. A community radio. Over there, you have an elderly club and a neighborhood veterinarian.

This is the center of grassroots organization in the sector of La Cañada in the region of 23 de Enero. And I would dare to say that it has an important impact on all of 23 de Enero.

Mike Fox: These neighborhood groups continue with their ongoing community work and services. But they’re still demonized in the press. Meanwhile, the violence sown by Juan Guaido’s opposition is ignored and overlooked.