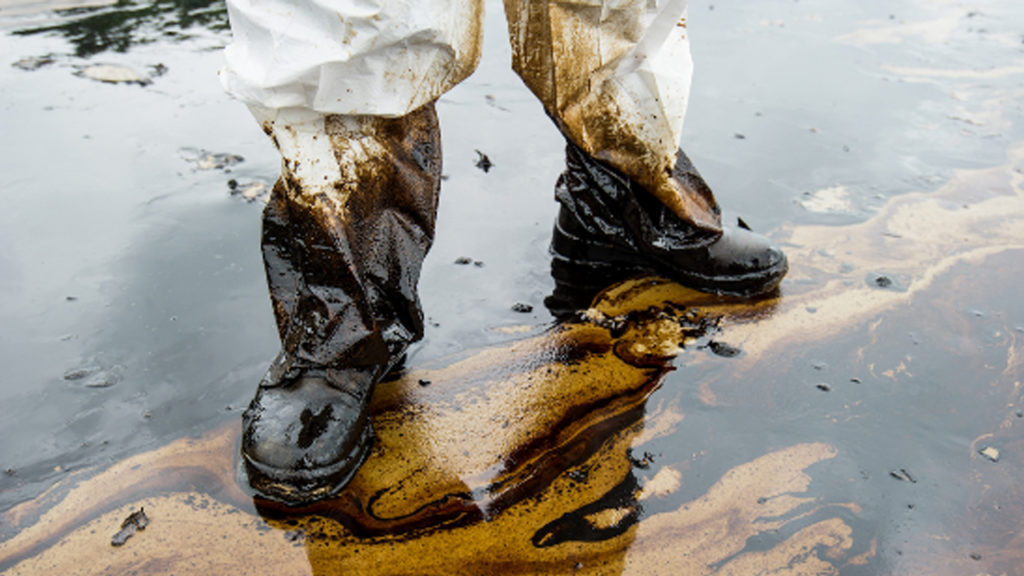 In January of this year, The Real News reported on the controversy surrounding Alberta’s toxic tar sands tailing ponds. As we reported at the time, Alberta’s oil industry has estimated the cost to clean up these massive tailings ponds at about $50 billion. But other experts have estimated the total cost to be far higher, and the Trudeau government seemed blissfully indifferent to the scale of the problem.

Now a tar sands scandal has erupted in Canada thanks to an unintentional leak by Alberta’s Energy Regulator. As reported by the National Observer earlier this month, Alberta’s Energy Regulator privately estimates the total cost of cleaning up the toxic tar sands tailing ponds to be as high as an eye-watering $260 billion, far higher than the estimate of $50 billion previously circulating. The official who delivered the new estimate is Rob Wadsworth, vice president of closure and liability for the Alberta Energy Regulator. He said that a “flawed system of industrial oversight is to blame for a problem that ultimately could leave taxpayers on the hook to cover a portion of the costs.”

What makes this revelation particularly disturbing is that the government has only collected $1.6 in liability security from oil companies, meaning that these massive cleanup costs are almost entirely unfunded and could well fall onto the shoulders of taxpayers long after oil companies have exploited these resources and distributed the profits to executives and shareholders.

Now back to discuss this with us as Regan Boychuk. Regan was appointed to the oil sands expert group advising the current government’s 2015 royalty review, and is the co-founder of Reclaiming Alberta’s Future Today, an organization raising awareness and advancing solutions to meet the enormous challenges of unfunded oilfield liabilities in Alberta. Thanks for coming back on The Real News, Regan.

REGAN BOYCHUK: Thanks for having me, Dimitri.

DIMITRI LASCARIS: Regan, before we take a look at this new and astonishing revelation, please tell us about the conclusions you had reached about the true cleanup costs before the public learned about the Alberta Energy Regulator’s internal estimate of those costs.

REGAN BOYCHUK: Well, it’s long been perfectly clear to anyone who’s looked into the issue that the Regulator has done a very poor job of holding the industry accountable to clean up aging and expired oilfield infrastructure in Alberta. All the experts and research that I’ve done on this issue in the last few years have all pointed to numbers that are in the same ballpark of the scale of what the Regulator internally concluded of at least $260 billion in cleanup, and that’s why Reclaim Alberta has been pushing to raise awareness about this critical issue, and pushing for reform while there’s still revenue coming from industry that would make it possible to start funding this desperately needed cleanup.

DIMITRI LASCARIS: And I know that you said at least $260 billion. In your view, based upon all the analysis you’ve done, how high do you think these costs could realistically go?

REGAN BOYCHUK: Well, I don’t think it’s very surprising that the very industry-friendly Energy Regulator in Alberta has come up with very conservative estimates. I have some additional data that Robert Wadsworth obtained for me that allowed me to do a further breakdown of these internal estimates that were revealed earlier this month and compare them to the only other publicly available cost estimates we have for this work for the Orphan Well Association. And the Regulator’s numbers are at least 40 percent below what it costs the Orphan Well Association to actually do this work. That gives an indication of how conservative this number is.

The presentation itself that was released through freedom of information requests said repeatedly that the number will go up once we learn more. There’s things that aren’t covered in this estimate. Once we get more information it will go higher. And all of the experts that I’m in contact with on these issues all put their estimates are rough, but they’re even bigger than the $260 billion.

DIMITRI LASCARIS: Now, has the energy regulator tried to walk back this number since the news broke? And if so, what is it now saying about the true cleanup costs?

REGAN BOYCHUK: Well, they did obviously try to take away any credibility from the released documents. But the press release they released is utterly absurd. Threw their own subject matter experts under the bus; completely distanced themselves from the seniormost officials’ analysis that was released in the presentation, and are doubling down on the old estimates that total less than $60 billion for the cleanup of all the oil sands, the conventional crude oil and natural gas industries and the coal industries. And those old estimates are in no way credible. They exclude little things like 400,000 kilometers of pipeline, and they pretend that nothing has ever been spilled or leaked in 100 years of energy development here in Alberta, so there’s nothing to clean up. Those numbers are in no way credible.

But the new estimates are far more realistic. Far more effort went into them. The Regulator’s own subject matter experts commissioned engineering studies to get a sense of the market cost of doing different sorts of work, and they’re much, much more credible and complete than these old estimates. But we are in a really absurd situation here in Alberta where the seniormost official on these issues in Alberta commissioned his own study amongst his own experts, and came to a very conservative conclusion that there was at least $200 billion more in cleanup liabilities that had previously been admitted or that are on any company’s balance sheets. And we’re in this absurd situation where that $200 billion in unfunded liabilities are hiding behind a press release from the Regulator, and everyone pretends they can’t see them. Everyone’s gone back to sleep. The issue’s closed. The Regulator distanced themself. That’s all. There was a report in the newspapers, a couple hundred words about their press release, dismissing the issue, and saying sorry for the confusion. Go back to sleep. The old numbers are certified. But this issue is much too big to be kept under the carpet.

DIMITRI LASCARIS: So this takes us, finally, to the reaction of the federal government, and also the provincial government in Alberta, the supposedly social democratic NDP government of Rachel Notley. Is there any indication that either the federal government of Justin Trudeau or Rachel Notley’s provincial government are going to take meaningful steps to at least close the gap between the security that has been obtained from the industry amounting to about $1.6 billion, and the amount of the liability, whatever it may be? Because even if you just accept the now-discredited number of the Alberta Energy Regulator of approximately $50-60 billion, the amount of security the government has attained is a tiny fraction of that. It’s well under 5 percent of that number. So it is–has this, at least, seemed to provoke either the provincial or the federal government into some action to close the gap between the liability and the security?

REGAN BOYCHUK: Well, there have been efforts underway for more than the last year, mostly as a result of the ominous Redwater Energy case that’s currently awaiting decision before the Supreme Court, where industry was allowed by Alberta courts to disown the cleanup. Anything that’s a mess, anything that’s contaminated, lenders can simply disown it in bankruptcy, liquidate everything of value for themselves, and there’s no money for cleanup. That has spurred some efforts amongst the government. Last year they had a liability management review bringing together stakeholders in industry, trying to come up with solutions to this issue. And I’m aware of some of the programs that are in development. Some have been announced. Some are still in development. But they’re waiting for the decision on Redwater, which is going to have a massive effect. If the Supreme Court affirms the Alberta court, regulators will simply not be able to hold industry accountable for its cleanup. And not just the oil and gas industry, and not just in Alberta, but every polluter will be able to walk away from their mess and leave it for someone else to worry about.

And so the Regulator has some minor programs. They don’t involve collecting a lot more in security. They involve setting very minimal standards for yearly reclamation. Every company will have to deal with a tiny percentage of its inactive inventory each year. But there’s a number of ways that’s gained in Alberta, and those reforms come under the premise that the Regulator has 50 years to start bending the curve on these issues; that the industry is going to be around and profitable for another 50 years, and they can just start chipping away at the edges in the meantime. But what they fail to appreciate is that outside of the oil sands in Alberta, the industry is no longer profitable. Hasn’t turned a profit in almost a decade. And it’s accumulated well over $100 billion in unfunded cleanup liabilities that create a crisis for the province. How is an insolvent, unprofitable industry going to fund the cleanup of a century of development?

And it’s those simple facts that the Regulator refuses to accept, and therefore the reforms in the works are far too small; not nearly urgent enough to deal with the scope and urgency of this crisis.

DIMITRI LASCARIS: Well, we’ve been speaking to Regan Boychuk about the new revelation of massive, previously undisclosed cleanup costs in Alberta’s oil industry. Thank you very much for talking to us today, Regan.

REGAN BOYCHUK: Thanks for having me.

It Could Take 2,800 Years to Clean Alberta’s Old Oil and Gas Wells

New Oil Sanctions on Venezuela: “Would Destroy What’s Left of its Economy”