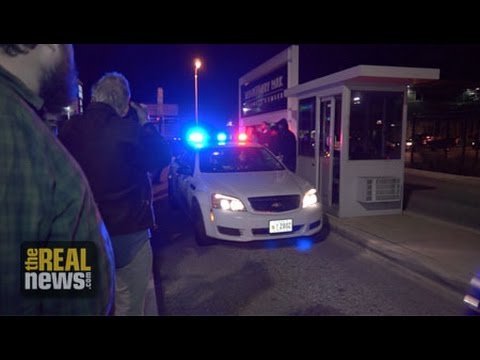 DHARNA NOOR, TRNN: As Baltimore awaits the verdict in the trial of Officer William Porter for the death of Freddie Gray, another critical story was unfolding away from the media spotlight. On Tuesday seven were arrested at the headquarters of the Maryland Department of Environment demanding the state cancel its permit for what is slated to be the largest trash incinerator in the country.

Destiny Watford spoke to officials inside the Department of Environment headquarters.

DESTINY WATFORD: So I’ve been, I’ve been part of a group called Free Your Voice. And for the past four years, since I was in high school, I’ve been fighting the plan to build the nation’s largest trash burning incinerator from being built less than a mile away from my high school, in my community.

NOOR: Watford lives not far from the site of the incinerator. She’s a leader of the Free Your Voice group that has mobilized against its construction.

NOOR: Activists say the incinerator’s permit has expired because the construction site has been idle for more than 18 months, violating the agreement terms. The Department of Environment told the Real News that the last possible start date allowed would have been November 3, 2015. Maryland’s Secretary of the Environment Ben Grumbles says that the Department of Environment is currently reviewing materials submitted by Energy Answers that counter the claim that this permit should be expired.

WATFORD: And that we have possible alternatives to the incinerator that we can invest in instead as a community. And his answer is that it’s a legal issue. It was this runaround of, well, it’s a legal issue. We should just wait and stall. Basically they said they were in communication with Energy Answers, and Energy Answers really wants them to wait, as they have been for years, and allow this project to continue. But that’s not okay.

NOOR: Curtis Bay residents and activists have opposed the incinerator for years. Experts at Johns Hopkins University have told us it could endanger the health of Curtis Bay residents, especially since the area is home to several public schools and is already the most polluted ZIP code in the state of Maryland.

This is Michael Trush, deputy director of the Johns Hopkins Center for Urban Environmental Health.

MICHAEL TRUSH: The main thing we’re concerned about [inaud.] is particularly air pollution coming up, is the impact of children and asthma.

NOOR: We are still waiting to hear back from Energy Answers for their response to these latest developments. Over the years strict emissions limits and regulations have greatly reduced the impact of incinerators. But experts say there’s no safe amount of toxins that incinerators are permitted to release, such as mercury, lead, and fine particulate matter.

Ron Saff is an assistant clinical professor of medicine at the Florida State University College of Medicine in Tallahassee. He successfully fought against the construction of an incinerator there.

RON SAFF: Science has now shown that for some populations there’s no safe level of these pollutants. So for some populations, those who are most predisposed to particle pollution are infants and the very elderly, and those with underlying heart disease. And science is now showing that there, there’s no safe level. Which means that even a teeny tiny amount can cause harm.

NOOR: Supporters have called the project a green job creator and a source of clean energy. They say burning trash is better than it being stored in landfills. But Neil Seldman, president of the Institute for Local Self-Reliance, has studied alternatives that he says could actually create more green jobs.

NOOR: He also noted that the incinerator would not even be used for Baltimore residents’ trash.

SELDMAN: The other point is that the garbage that will be burned is not from Baltimore. It’s going to be imported from outside the city. So the community, which is already burdened by industrial pollution, will be getting more pollution from someone else’s garbage, and that doesn’t sit well in the community, which needs jobs, good jobs, and does not need any more industrial pollution.

NOOR: Opponents also had a message for Mayor Stephanie Rawlings-Blake, who just returned from COP21, the International Climate Conference in Paris. Speaking on the Marc Steiner Show, she claimed to be unaware of the exact toxins which will be emitted by this incinerator.

WATFORD: Yeah. That’s actually really funny that she doesn’t have the information, because back in 2009 she was in complete support with the incinerator, including with, along with our previous governor, Governor O’Malley, who’s now running for president on a green platform. So she has the information. She knows what she’s doing. But if she wants it, I’m–we’re totally willing to provide it for her.

NOOR: The Real News will keep following developments in this story. With Cameron Granadino, this is Dharna Noor.