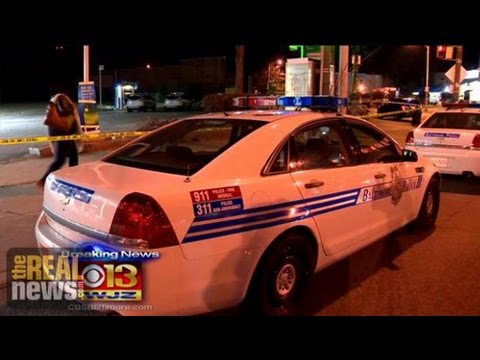 Here in Baltimore on Sunday, Officer Andrew Groman was allegedly shot by Donte Jones, who had a record of gun and drug possession. And this has been a hot topic in Baltimore, especially since there’s been a wave of unprecedented protests against police brutality and accountability. The police commissioner, Anthony Batts, made headlines when he questioned whether protesters will also be marching for slain and injured officers who were hurt in the line of duty. The head of the police union made a statement to The Baltimore Sun, where he said he’s concerned whether officers, in the light of all the scrutiny of police brutality, will hesitate to draw their weapons in times of need.

Well, now joining us to discuss this is Neill Franklin. He’s the executive director of LEAP, Law Enforcement Against Prohibition. And he’s also a 33-year police veteran who led a multijurisdictional antinarcotics task force for the Maryland State Police. And he ran training for the Baltimore Police Department.

Thank you so much for joining us again, Neill.

NEILL FRANKLIN, EXECUTIVE DIRECTOR, LEAP: Thanks for having me, Jaisal.

NOOR: So, Neill, well, respond, if you like, to what the commissioner and head of the police union in Baltimore here said. But also, what’s missing from the conversation about concern about why this young man, who was, I believe, still a teenager, was still on the street? Because he had record of gun charges of drug charges.

FRANKLIN: Well, I understand there’s a concern about–because of the marches, because of the attention nationally being brought to the interaction of police with mainly our young black citizens in this country, will police officers be hesitant in taking the appropriate action when there is danger?

And that’s where training is important. Yes, it’s in the minds of all of us, and it’s going to be in the minds of all of us. But if you stick to your training and if you treat people the way they’re supposed to be treated, you stick to your training, you watch what you’re supposed to watch, you do things as a team the way that you’re trained, but more importantly, you just have to make sure, as you’re working, that you’re tactically smart. You know, you make sure you don’t put yourself out in the open when you’re trying to get someone to comply with your wishes. We train very well surrounding traffic stops, but there’s no such thing as a routine traffic stop. You have to treat each and every one according to its own merits. And you know what? Even when you do that, unfortunately, bad things do happen. It’s a dangerous job that we’ve signed on to do. As long as we stick to our training, I think we’re going to be fine.

NOOR: And around that issue of training and of how police officers conduct themselves in the field, people have raised the issue that Donte Jones, he had several gun charges, drug charges. Why was he out?

But once we’ve identified someone who is going to carry a gun, who has committed gun crimes and so on, there are a number of other factors that come into play here. And one that I think [we don’t look at (?)]: so what is the true history? What are the details of the history surrounding Jones? These prior cases, were they at the level where the prosecutor’s office felt comfortable enough with going forward with trial and putting Jones away for a long period of time? Or was there a plea deal? Was the plea deal because maybe the cases weren’t solid enough to prosecute Jones, to convict Jones, and to get a lengthy sentence? And then, once Jones is out on bail or whatever and he violates his probation, as in this particular case, and now there’s a warrant out for him–do you know how many warrants that we have in this city for violent offenders that we’re trying to serve and the limited number of police officers that we have to do this?

And, again, systems, systemic problems, a lot of this is because we have so much turmoil and problems surrounding the drug war, so much focus on enforcing these drug laws and the nonviolent drug laws out there. We should be focusing on violent offenders.

NOOR: And this whole debate that’s happening right now in Baltimore, it comes at a time when relationships between the community and law enforcement is at maybe an all-time low. It’s really, really bad right now. What’s not being discussed is how things got so bad. And you are the head of training of Baltimore police. But there’s also–you know, just a decade ago we were witnessing zero-tolerance under the Martin O’Malley–you know, now outgoing governor Martin O’Malley administration.

FRANKLIN: And we got sued for that big-time.

NOOR: And there was 100,000 people in 2005 that got arrested. And the rate of people being swept up illegally, it was unbelievable.

FRANKLIN: So the systems that we put in place and the systems that we support, like we did with this zero-tolerance policy back then, when you have jump-out squads in our neighborhoods just snatching up every and anybody who even looks like they’re committing a crime, very problematic. In Baltimore City, actually, the rate was somewhere about 20 percent of those being arrested were released without charges being preferred. I think the closest jurisdiction to that was Prince George’s County, Maryland. And it was somewhere around 2 percent. That’s an alarming disparity. Huge red flag.

So how do you think these citizens are going to feel? I mean, do you really think that these citizens who were at the brunt of this are going to work with the police and give them the information that they need to solve violent crimes, any crime, for that matter, in their communities? Flat out don’t trust the police because of this type of enforcement activity.

NOOR: You know, just four decades ago you had a clearance rate of about nine out of ten homicides were solved in this city. And now it’s much [lower (?)].

NOOR: And it stems from a breakdown of trust between law enforcement.

FRANKLIN: We need the citizens and the cooperation and information from the citizens to solve murders in this city or any city around this country.

And again, you know me, Jaisal. I’m going to keep coming back to this daggone drug war that has driven a huge wage in between police and community and is responsible for a lot of the heavy-handed policing that we have of our young black males.

NOOR: And we’re going to continue this conversation in the next part of this interview.

FRANKLIN: Looking forward to it.

NOOR: So, Neill Franklin, thank you so much for joining us again.

And thank you for joining us at The Real News Network.­

Neill Franklin is the executive director of The Law Enforcement Action Partnership, otherwise known as LEAP. He’s a 33-year police veteran whose led multi-jurisdictional anti-narcotics task forces for the Maryland state police and ran training centers for the Baltimore Police Department and the Maryland State Police.