New UN Report Examines Challenges to Sustainable Development in a 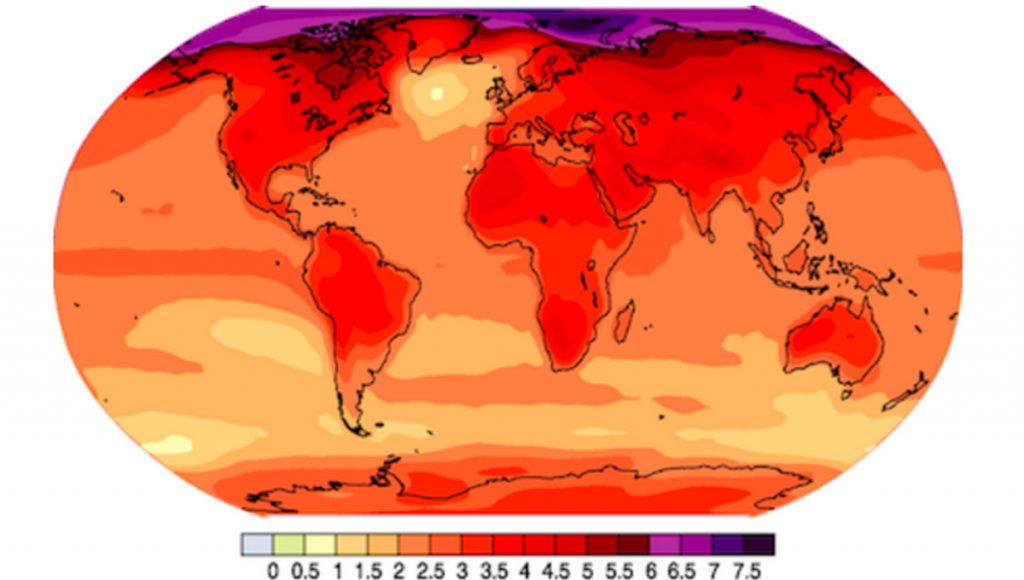 DIMITRI LASCARIS: This is Dimitri Lascaris reporting from Montreal, Canada for The Real News. The United Nations Intergovernmental Panel on Climate Change recently circulated a draft for expert and government review of a special report examining the impacts of global warming of 1.5 degrees Celsius above pre-industrial levels in the context of strengthening the global response to the threat of climate change, sustainable development and efforts to eradicate poverty. Draft reports are provided to reviewers as working documents and the IPC cautions that they are not intended for public distribution and must not be quoted or cited.

As we wait for the final report due out in October, what might we surmise from that report before it goes through the rigors of further expert commentary, peer review and scientific updates? With us to discuss some of the issues that inform the draft report, I am pleased to be joined by one of the lead authors, Professor Petra Tschakert.

Professor Tschakert is the centenary professor of rural development at the University of Western Australia. She works mainly on climate change adaptation, social and environmental justice, inequalities in rural livelihoods, and livelihood security in a development context. She joins us today from Perth, Australia. Thank you very much for joining us today, Professor Tschakert.

PETRA TSCHAKERT: Delighted to be with you. Thanks.

DIMITRI LASCARIS: So, I understand, of course, that as one of the lead authors of the special report, you can’t discuss in detail the draft, as it is a work in progress. So, I’d like to discuss with you the context of the draft report. How is climate change, broadly speaking, intertwined with sustainable development?

PETRA TSCHAKERT: We know that climate change has the potential and already does undermine sustainable development. We know climate change threatens our progress towards reducing poverty, towards eradicating poverty. So, we know that from the last IPCC reports, the Fifth Assessment Report that came out in 2014. That’s pretty well established.

Now, what’s interesting about this special report on 1.5 degree global warming, is that we, of course, are not only looking at the temperature increase, we currently already have 1 degree Celsius above pre-industrial times. So, we’re looking at how the world would look like under 1.5, an additional .5 degree Celsius warming. And what that means for sustainable development and poverty eradication.

But in addition to that, we’re looking at one element that you slightly skipped from the title of this report, a very very long title. We’re also looking at the impacts of emissions or mitigation and adaptation pathways and their potential to undermine sustainable development and poverty eradication.

So, that’s the broad context. In addition to that, and many people I’m sure know that, the special report on 1.5 came out of the Paris Agreement, 2015, in December. But prior to the Paris Agreement, we had a major, two actually, two major international agreements. In March that year, 2015, the Sendai Framework on Disaster Risk Production, and in September of that same year, the UN SDGs, the Sustainable Development Goals.

So, can we indeed reach both goals? This is what this report is supposed to assess. Can we limit warming to 1.5? And can we reach all 17 SDGs by 2030? 1.5 1.5 is supposed to be until the end of the century. Do those two go hand in hand? Or does climate change and the actions that we put in place undermine SDG Number One, which is to reduce poverty at all levels, everywhere. Does it undermine or potentially facilitate the goal to reach SDG Number Two, zero hunger and so on?

DIMITRI LASCARIS: Can you give us an example of a measure designed to limit warming to less than 1.5 degrees Celsius that would undermine sustainable development?

PETRA TSCHAKERT: So, of one of the prime examples, which is discussed in this context, are any measures that take CO2 emissions out of the atmosphere. Think about it that way. If we want to reach 1.5, and we continue the emissions that we produce today, we’ll probably going to reach 1.5, the global average, by well around mid-century. And we’re going to exceed it. So, that cannot be the strategy.

Now one of the strategies that is discussed quite widely is something called BECCS: Bioenergy and Carbon Capture and Storage. BECCS, in order to produce a lot of bioenergy that would then be used to provide energy to fossil plants, for example, or power plants, not fossil plants, power plants and then the carbon would be stored on the ground.

Well, that requires land. And as we know, we don’t have unlimited lands. Land is used today in marginal areas for rural livelihoods that eke out a living in these marginal zones. For food production, for sustaining pasture lands. Now, we don’t have free areas that could easily be transformed into massive bioenergy producing carbon sinks.

DIMITRI LASCARIS: In terms of impacts, the United States saw its worst extreme weather season in recorded history last year. And we’re seeing punishing droughts raging across Africa, Cape Town may be on the verge of running out of water. Are we seeing broad impacts around the world? These are some localized, relatively localized examples I’ve given you, broad impacts around the world on agriculture and food and water supplies resulting from climate change?

PETRA TSCHAKERT: Absolutely. Absolutely. I think these trends are well documented, they’re well observed, they were in the last IPCC Assessment Report, they’re going to be in the special report as well. But I think it’s precisely those local examples that show us what complexity here is actually at work. And let me take the example of Cape Town, which I think is a really really interesting one.

So, Cape Town has a population of 4 million, roughly. And it was in the news, people talk about it, Cape Town is going to run out of water. So, the term that is used, Day Zero, is when the government will simply close off the taps. First assumptions were that Day Zero would be reached in April, then given some conservation measures, that date has been pushed back to May. Now, it’s probably going to be June or July and by then, hopefully the rains will be here.

But the way it looks right now is that the six reservoirs that are in place are going to dry up. Now, how can that happen? How can that happen in a flourishing, booming place like Cape Town? Well, we think on the one hand, of course, it’s well, three years of drought that exceeded people’s expectations of how bad it actually could be.

And on the other hand, it’s growing population numbers, and possibly some hesitation, mismanagement, not putting policies in place at the right time. Now, what’s interesting, and this is how it relates to development and poverty, but also inequalities is that the way the water crisis in Cape Town is playing out right now, has very different impacts on whether or not you belong to the high-income flourishing population class or if you’re in one of the poor neighborhoods.

So, if you have the means, what are you going to do when water’s going to go scarce? Well, there are lots of people who are already hiring companies to drill them wells. Or, they’re buying en masse bottled water, even if it’s at inflated prices. Private desalination machines. So, people have options if they have money.

As you know, Cape Town still has a legacy of apartheid, and we still have informal settlements where population densities are high. But people don’t have the means to buy bottled water, and certainly not to drill their own well. So, inequality, highly racialized, of course, in Cape Town, is going to determine who will actually come out quite safe from this water crisis and who will not.

Of course, the government is fully aware that it’s important to guarantee water as long as possible to informal settlements. Why? Well, this is where you have the highest population density. People run out of water there, certainly you have a spread of disease instantaneously. But also a risk of riots and anarchy, and the mayor of Cape Town is fully aware of it.

So, climate change is not just going to happen in the future. It’s happening now. If Cape Town is running out of water in three months, maybe four, we see the warming in the Arctic that is happening right now, last week, unprecedented warming levels, in a place that apparently is undergoing winter, right? So high latitude settlements in Greenland, northern tip of Greenland, sun is not even rising, it’s north in winter, and nonetheless we have temperatures beyond freezing, higher temperatures than Europe, many parts of Europe experienced last week. So, it’s happening right now.

How would a world under 1.5 degrees warming look like? So, .5 more we think, “Ah, that’s not even one degree, how can it possibly matter?” Well, 1.5 is not equally distributed, right. 1.5 is a global average that takes into account land masses and oceans. A 1.5 degree warming could mean eight degrees warmer for the Arctic. And that’s, it’s actually to me unimaginable. I cannot imagine how people who already experienced losses… would deal with an eight degree warming.

So, we’re looking not just as localized experiences, but global patterns that seem to be out of sync with what we know about atmospheric circulation. But also down to a level of livelihoods, people’s knowledge of lands, strategies to survive, strategies to find food and so on. And that’s very worrisome.

DIMITRI LASCARIS: This has been Dimitri Lascaris speaking to Professor Petra Tschakert of the University of Western Australia, in connection with a draft report of the U.N. Intergovernmental Panel on Climate Change on the impacts of global warming of 1.5 degrees Celsius in the context of strengthening the global response to climate change and sustainable development and efforts to eradicate poverty. Thank you very much for joining us today, Professor Tschakert.

DIMITRI LASCARIS: This is Dimitri Lascaris, reporting for The Real News from Montreal, Canada.

Petra Tschakert is a Centenary Professor of Rural Development at the University of Western Australia in the UWA School of Agriculture and Environment. She trained as a human-environment geographer with background in arid lands resources sciences and applied anthropology, working mainly on climate change adaptation, social and environmental justice, inequalities, and rural livelihoods and livelihood…