Hasan Tekguc and Bengi Akbulut discuss their research on the gender gap in poverty in Turkey. When comparing household income, it is impossible to know about the gender-based inequality within households

Hasan Tekguc and Bengi Akbulut discuss their research on the gender gap in poverty in Turkey. When comparing household income, it is impossible to know about the gender-based inequality within households

Research: A Multidimensional Approach to the Gender Gap in Poverty: An Application for Turkey 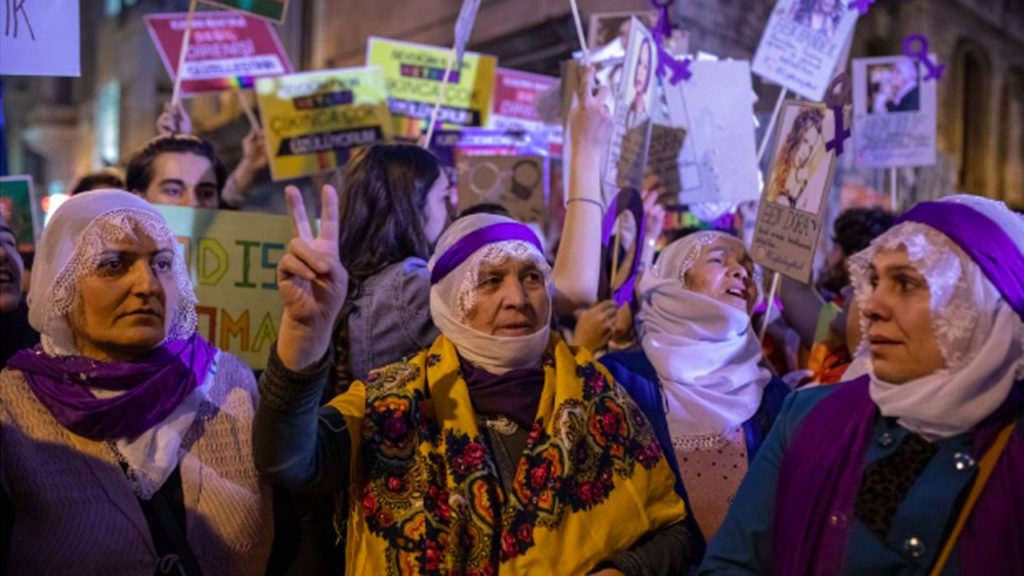 GREG WILPERT It’s The Real News Network and I’m Greg Wilpert in Baltimore. What is the relationship between gender and poverty? Most studies of poverty focus on the level of the household and tend not to pay much attention to the gender differences within a given household, which makes it rather difficult to find out how poverty and gender differences are connected or related. A recent study published by the Political Economy Research Institute, PERI, looks at the way gender affects the poverty gap in Turkey. The study is titled A Multidimensional Approach to the Gender Gap in Poverty: An Application for Turkey. Although the Turkish government claims to prioritize the closing of gender gaps, Turkish women argue that inequality in Turkey is enshrined in law, which makes it impossible to actually achieve equality. In a demonstration in 2017, several women sharply criticized gender discrimination in Turkish law.

AYSEGUL DOKER [WOMEN’S RIGHTS ACTIVIST, TURKEY] They do not even let this [march] happen. They cannot tolerate this. They do not want us, the women, to be free. But we will not leave the streets as long as we can.

FATOS OCAL [WOMEN’S RIGHTS ACTIVIST, TURKEY] First, the government needs to stop their discriminative policies, even supported by laws, against women, because women will always say no to this.

GREG WILPERT The PERI study on gender and poverty in Turkey, developed an innovative way of measuring the poverty gap within households so that the inequality between men and women in the same household can be revealed. It uses a Turkish survey of living conditions for the years 2006 to 2015 and a multidimensional poverty measurement method that takes education, health, employment, and household living conditions into account. We’re now joined by the two authors of the PERI study, Hasan Tekguc and Bengi Akbulut. Both of them earned a Ph.D. in Economics from the University of Massachusetts-Amherst. Hasan joins us from Istanbul, Turkey and Bengi joins us from Montreal, Canada. Thanks, Hasan and Bengi, for being here today.

GREG WILPERT So, Bengi, let’s start with you. Explain what it means when you found that the gender poverty gap difference within households was eight percent. How can there even be a poverty difference within one household and what are the consequences of this for men and women and for poverty?

GREG WILPERT Hasan, tell us more about the multidimensional measurement of the poverty gap. I mean, how is it different or better from other measurements of poverty, such as the Human Development Index or the Millennium Development Goals?

HASAN TEKGUC Okay. Actually, the multidimensional poverty measurement is built up from the Human Development Index. Its main difference is, the measure is not the measure of averages, but each—whatever dimension you want to measure, you measure it individually. Its advantages come from the fact that you can identify households who are deprived in more than one dimension, whereas in the Human Development Index approach, you only know the country averages for each dimension. So a country that has some people poor but not healthy, some people educationally-deprived but healthy, and some other people who are unhealthy but educationally completed schooling, will have the same score with another country where the same individuals are both educationally and health-wise deprived. The multidimensional poverty approach takes the Human Development Index and applies it to the individual level, so that we can identify households which are jointly deprived in more than one dimension, so we can really see if it is a household that is deprived very severely versus only in one dimension or maybe two dimensions only, depending on your choice of dimensions.

GREG WILPERT Bengi, turning back to you, looking at the survey of living conditions for 2006 to 2015, how do you assess the trend in terms of gender inequality and regarding the poverty gap? Is this poverty gap closing at all?

BENGI AKBULUT Well, okay. Since we are kind of limited by the data set that we use, we see some trends of a shrinking gender poverty gap looking at that data. Mostly, we saw that especially younger women are, kind of, driving this shrinking of the poverty gap because, as I mentioned and as Hasan mentioned as well, education is one of the core aspects or dimensions of poverty that we have included. Younger women are facing or attaining faster increases of educational status, so that’s one of the dimensions that really are driving the shrink in the gender poverty gap that we witnessed. The other one is, though not as significantly, is driven by the employment status. The more that women are able to get opportunities in the formal labor force or are able to stay in the formal labor force longer, that drives partly the shrinking in the gender poverty gap as well. That said, there is one dimension or there is one aspect that is kind of a limiting aspect of our analysis— we do not have how household conditions are affecting or how household conditions are enjoyed by household members, men and women. Separately, we do not really see if there is a change in the gender poverty gap in that sense. We kind of assume that everyone who lives in the same house, are able to enjoy the living conditions or they have the same living conditions, which might not be true. We are not able to see that change, if there is any, but in terms of education and especially employment, we see some changes in the gender gap in poverty.

GREG WILPERT Now, Hasan. Bengi was talking about how you found that labor force participation being one of the main forces in reducing the poverty gap for women, and that reducing these gaps were mainly made for young women it seems. Isn’t this a positive development, since it gives hope that advances towards gender equality are sustainable over the long term?

HASAN TEKGUC Very limited hope, because it’s moving very slowly. We are speaking of here, a reduction in the gap of maybe five to six percent between men and women over ten years, so this is very gradual. Some of it—The women’s labor force participation in Turkey, the starting point is very low. What we are seeing in our data sets, around 30 percent. We don’t know if this trend is going to all the way, close the gap. I can’t say if this progress will continue, when the female labor force participation reaches to 50 percent, if it ever reaches. It’s important to realize that it’s a very slow improvement, and we don’t have the range of data that can give us an idea of what will happen when women are really close to men because that’s just never happened in Turkey in labor force participation, so it’s out of our observation range. My guess, this is not something we’ve explicitly investigated or can investigate, but the increasing employment of women is driven by increasing educational attainment, and the educational attainment for the younger generation between men and women, already the gap must be closed. If the driver in employment is the education gap, it’s closing and it’s almost closed, so what else is going to drive it in the future? I think, my guess would be policy, which relates back to your initial video from Turkey, so that’s up for grabs.

GREG WILPERT Okay. We’re going to leave it there for now. I was speaking to Hasan Tekguc and Bengi Akbulut, authors of the PERI report, A Multidimensional Approach to the Gender Gap in Poverty: An Application for Turkey. Thank you for joining The Real News Network.

Women Outnumber Men in the US Workforce–What Does it Mean?