Among items transfered to local law enforcement agencies have been assault rifles and grenade launchers, even Blackhawk helicopters and .50 caliber machine guns; In fiscal year 2011 alone, the Pentagon transferred almost $500 million worth of materials to domestic law enforcement - near double the previous year's total

Among items transfered to local law enforcement agencies have been assault rifles and grenade launchers, even Blackhawk helicopters and .50 caliber machine guns; In fiscal year 2011 alone, the Pentagon transferred almost $500 million worth of materials to domestic law enforcement - near double the previous year's total 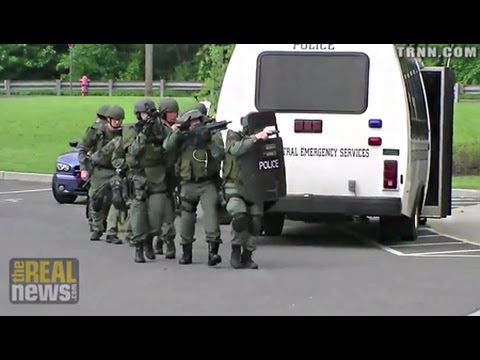 DAVID ZLUTNICK, PRODUCER: Men in heavy armor carry assault rifles, patrolling streets alongside armored personnel carriers. These are scenes from the manhunt in Watertown, following April 15’s Boston Marathon Bombings. After locking down the area, local, state, and federal agencies sent SWAT teams out in force in search of the remaining suspect. The images from those days are striking, and raise serious questions about how and when the use of paramilitary policing tools should be used.

SWAT teams originated in the late 1960s, but their use greatly expanded in the 1980s as the Reagan administration doubled down on the drug war. In 1988 the Byrne Grant Program passed Congress, allocating substantial funding for anti-drug policing. As money was awarded for drug arrests, resources shifted toward drug raids, increasingly using SWAT teams for this purpose. Meanwhile federal programs were introduced increasing training and cooperation between the military and domestic law enforcement to battle drug crime.

Other Reagan-era policies encouraged the transfer of surplus military hardware to law enforcement, which in the 1990s became firmly established by the Clinton Administration’s 1033 Program, incorporating millions of pieces of equipment designed for war zones into domestic policing agencies.

After the September 11 attacks, the Department of Homeland Security, or DHS, began awarding grants to enhance special operations and tactical resources to local, state, and federal agencies. Ali Winston, an Oakland-based journalist covering law enforcement, has watched the application of the DHS grants.

ALI WINSTON, JOURNALIST: –granting hundreds of millions of dollars to local law enforcement, administered through states, to beef up the capabilities of police departments to respond to terrorist threats. And what that means is that they’re purchasing heavy equipment like armored personnel carriers, they’re purchasing body armor, they’re purchasing mobile command centers. In some cases these funds are now actually being applied toward drones.

ZLUTNICK: Many large defense contractors have shifted at least in part away from military contracts toward domestic law enforcement due to the billions of dollars available through DHS grants, and several new companies have arisen specifically to supply military-grade assets to police agencies.

WINSTON: There’s a lot of venture capital being invested in surveillance systems and technology. The major defense contractors–Lockheed Martin, Northrop Grumman, L-3–they’ve all put a tremendous amount of capital into developing such systems.

ZLUTNICK: In a 2011 report, the Center for Investigative Reporting found that in the decade following 9/11, over $34 billion in DHS grants were disbursed in order to fight terrorism. However, the recipients of those assets were not just in cities such as New York or Washington, D.C.; most often they were small towns such as Oxford, Alabama, or Keene, New Hampshire, unlikely targets for terrorism.

But Bob Chabali, chairman of the Board of the National Tactical Officers Association, the NTOA, and assistant police chief in Dayton, Ohio, believes these grants and much of the equipment they buy are imperative for ensuring the safety of communities across the United States.

ASSISTANT CHIEF BOB CHABALI, NATIONAL TACTICAL OFFICERS ASSOCIATION: You just saw what happened at the Boston Marathon recently, where, in essence, the acquisition of that type of equipment enhanced the safety of that community. There’s no money you can set on that type of equipment to protect the personnel that are dealing with that problem. Realize that–and it’s not to be an alarmist, but the fact is that terrorism is here.

ZLUTNICK: Under the Obama administration the transfer of military surplus has greatly expanded. Among other items transfered to local law enforcement agencies have been assault rifles and grenade launchers, even Blackhawk helicopters and .50 caliber machine guns–a weapon so powerful the U.S. military has restrictions on how it can be used in combat zones. In fiscal year 2011 alone, the Pentagon transferred almost $500 million worth of materials to domestic law enforcement–nearly double the previous year’s total. This number was expected to grow in 2012.

Assistant Chief Chabali says programs like these are necessary to properly outfit police departments that would not otherwise have the resources to acquire assets capable of addressing the serious threats cities now face. But Peter Kraska, a criminologist at Eastern Kentucky University, says these types of resources have significantly militarized police forces, whether intentionally or not.

PETER KRASKA, EASTERN KENTUCKY UNIVERSITY: Whether you’re a large police department or a small police department, you can fill out a grant application, and it’s not terribly difficult to get a full-blown armored personnel carrier at the tune of $275,000 for your department of 50 officers. That could change that department from thinking more in terms of community policing solutions to more use-of-force solutions.

ZLUTNICK: Kraska and other critics have argued that these more aggressive tools translate into more aggressive policing. Military resources and training have then changed the way officers interact with their communities, from a mindset of community protection to one of combat.

WINSTON: This is not universal, but in a lot of cases–particularly I can think of New York, I can think of Oakland–the officers perceive these certain neighborhoods as theaters of operation.

KRASKA: It’s not that some police departments aren’t still doing community policing initiatives and don’t believe in them strongly, but you’ve had a whole mindset where the best way to think about solving problems in our communities is through show of force and use of force. These units, if they were to stay true to their original function, which is to handle only the very rare reactive, in-progress sort of thing that they need to respond to–a school shooting or a terrorist incident–if they only did that, they would have very, very, very little to do. And so when these departments started creating a full-blown SWAT team and then they have nothing to do, they have found ways to use them.

ZLUTNICK: Kraska’s studies of SWAT teams found their use had skyrocketed from a few thousand instances per year in the 1980s to more than 50,000 per year when he concluded his research in 2005. The numbers are expected to have risen since then. Studies of SWAT team use have shown the majority of SWAT raids were used to serve warrants against non-violent drug offenders. A state investigation in Maine found that in some areas 100 percent of warrants were carried out by SWAT teams, regardless of the suspected crime.

KRASKA: It’s hard to not see that as overkill and manufacturing a dangerous situation that wasn’t dangerous before.

ZLUTNICK: Assistant Chief Chabali says that any use of a SWAT team against a suspect who is not known to pose a direct threat would go against the standards set out by the NTOA, and insists his Dayton SWAT team does not deploy against non-violent suspects.

CHABALI: Well, I can tell you that we do not condone that–the NTOA. And the Dayton Police SWAT team basically only responds when an incident–or an individual is heavily armed, has fired at police, is known to be violent, has a violent past. And we definitely do not want and do not condone the misuse of a SWAT unit.

ZLUTNICK: While violent crime rates have overall declined, supporters of these measures often say they are needed due to the ever-expanding arsenal of high-powered weapons, and assault rifles in particular, that can be found on US streets.

CHABALI: It is obviously a more armed suspect that we’re dealing with today. Keep in mind that some of the equipment that you’re referring to does not just go to SWAT teams. They are now–for example, shoulder weapons, rifles, are in the hands of patrol officers because it is a much more violent society.

KRASKA: Safety seems to justify all kinds of security measures that really wouldn’t have been seen as appropriate just 15, 20, or 30 years ago… I mean we could take this safety ethic real far. There has to be some lines that we say, “You know this isn’t appropriate levels of security given what we’re looking for.”

ZLUTNICK: But Assistant Chief Chabali remains steadfast in his support for these programs. He argues SWAT and other such assets are essential for public safety.

CHABALI: Keep in mind that the reality of SWAT is it is used as a life-saving tool, as it was really in Boston in that tragic incident.

ZLUTNICK: Attention has recently been drawn to paramilitary policing as a result of the events in Boston, but also following police crackdowns on Occupy protests in 2011 and early 2012.

WINSTON: Finally these units are being deployed outside of the poor neighborhoods in urban America–in inner-city America. You’re seeing them deployed against, you know, college-educated white people or college-educated people of whatever race there may be who are ostensibly exercising their First Amendment rights. This sort of policing has been going on for quite a long time in communities where the drug war has played out.

ZLUTNICK: And this form of policing seems likely to continue as additional funding is made available for such resources, whether they be used on citywide manhunts in Boston, to disperse angry protesters in Oakland, or to serve drug warrants in Newark.

From San Francisco, California, this is David Zlutnick for The Real News Network.