Since 1999, 10,000 additional police officers have been placed at schools, with no impact on violence. Meanwhile, about one million students have been arrested for acts previously punishable by detention or suspension, and black students are three times more likely to be arrested than their white peers, says policy analyst Samuel Sinyangwe

Since 1999, 10,000 additional police officers have been placed at schools, with no impact on violence. Meanwhile, about one million students have been arrested for acts previously punishable by detention or suspension, and black students are three times more likely to be arrested than their white peers, says policy analyst Samuel Sinyangwe 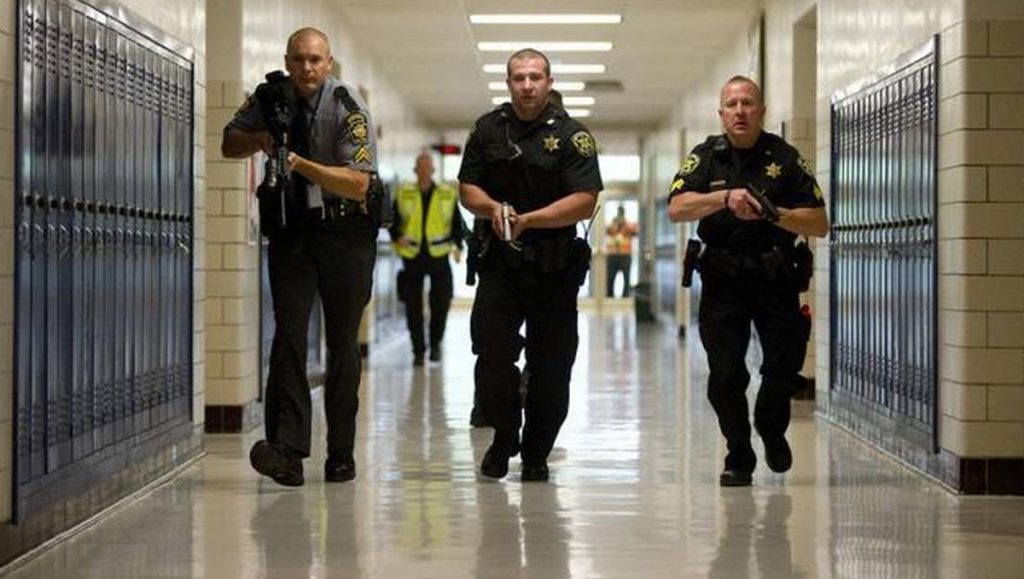 SHARMINI PERIES: It’s The Real New Network. I’m Sharmini Peries coming to you from Baltimore. The tragic shooting at a high school in Parkland, Florida has ignited a national discussion about gun control and school safety. The suspected shooter, white supremacist Nikolas Cruz was trained in the army’s Junior Reserve Officers’ Training Corps Program, where the US military officers taught him to shoot rifles at targets as small as a coin.

Cruz, a violent racist who in social media messages fantasized about murdering black people, Mexicans, and gay people, used an AR-15 assault style rifle in the attack, killing 17 classmates, and wounding at least 15 more. Some advocates have proposed hiring more school police and giving heavier weapons for officers who are already in schools as a solution. This is a trend that has been growing steadily, with the number of police doubling in the past two decades.

In 1996, 20% of public schools had a police officer in the building. Today, there are officers in 43% of public schools. Yet, there is little evidence that these officers have stopped any school shootings. In fact, Parkland, Florida’s Marjory Stoneman Douglas High School had a school officer on the premises, but he was not able to do anything about preventing the shooting.

Meanwhile, racial justice activists warn that putting more officers in school could actually increase violence, not prevent it. Evidence of this emerge in viral videos posted on social media that has shown us school cops brutalizing students. Joining us now to discuss the over-policing and militarization of our schools is Samuel Sinyangwe.

Samuel is a policy analyst and data scientist who works with communities of color to fight systemic racism. He co-founded the project Mapping Police Violence, which collects data on police violence. Thank you so much for joining us Sam.

SHARMINI PERIES: Sam, do you think putting more police in schools can stop these kinds of shootings in the future?

SAM SINYANGWE: As a data scientist, it’s important to consult the evidence in the data to actually figure out whether this strategy of increasing policing and criminalization in schools in as effective one. The data is pretty clear that more police officers in school—which we’ve seen, as you mentioned, over 10,000 additional police officers are now in schools compared to when Columbine happened in 1999, which really helped start this trend—it hasn’t had a noticeable impact on rates of police shootings, the likelihood that a police shooting will happen. There are not a wealth of cases that you can point to where a school police officer stopped and prevented school shootings. The only data and evidence that does exist is evidence that shows that more police in schools leads to more criminalization of students, and especially black and brown students.

Every single year, about 70,000 kids are arrested in school, and black kids are three times more likely to be arrested than their white peers. Kids are being arrested for things that previously would’ve resulted in a detention or a suspension. Now they’re being arrested for things like disorderly conduct and fighting in schools without weapons. Things that kids do in middle school and high school, and that would not have been resulting in criminal charges against those students. Except, for the fact that there are police officers now responding to those incidents instead of school principals and administrators.

We see 70,000 kids a year, that’s about 1 million kids, over 1 million kids that have been arrested and many of which have been hit with a criminal record and incarcerated over the past two decades since this trend began. And so, we look at this incredible amount of violence and abuse of students in schools over the past two decades and you ask the question: why? And there’s really not a solid argument as to why we need all of these police in schools, let alone adding more of them, which is what the conservatives and the right wing think we should be doing.

SHARMINI PERIES: Since 1999 Columbine shooting, as you said, since then, the Department of Justice spend more than $753 million to hire school police officers. Since 2010, the DOJ and the officers’ hiring program has spent more than $1 billion to hire thousands more school officers. What has the effect been and this kind of money, how can it be used to prevent these kinds of shootings taking place without putting cops in the schools?

SAM SINYANGWE: $1 billion is being spent and there is literally no decisive evidence to suggest that schools are any safer after $1 billion has been spent. Instead, all we’ve seen are kids with criminal records now, kids being arrested, kids being put on the school to prison pipeline as a consequence of our taxpayer money going to support these school resource officers.

And so, there are effective strategies here. There are strategies that many states and cities have begun to implement to restrict access to guns that have reduced gun violence, and that should be scaled across the nation if Congress was doing their job. That’s exactly what we need them to do.

SHARMINI PERIES: Since the Parkland shooting, the sheriff in surrounding county of Broward County I believe announced that deputies will now be allowed to carry rifles on school grounds. How is the community responding to this?

We’ve seen all these different cases across the country of people being abused by the police. And now, giving the police even more fire power is not a solution that works. The solution that works is to effectively restrict access to guns and make sure that AR-15s don’t end up in the hands of people who want to kill amazing numbers of people because they have underlying issues and problems that need to be solved. By our mental health system, by our criminal justice system, by all of the systems that are in place to help prevent it from getting to that point in the first place. And certainly, to prevent somebody like that from getting access to an AR-15.

SHARMINI PERIES: Sam, I know when people feel fear, they think the way in which to protect themselves is to buy more arms, put a gun in your purse, and militarize and arm ourselves even more. Have you seen that any other jurisdiction that has had a different strategy here to deal with this kind of violence in our society and has taken a step back and said, “Well you know, increasing the number of guns out there is not the solution.”

SAM SINYANGWE: Yeah. Just to hit this point home on militarization, there is no evidence that increased militarization of the police does anything positive at all for society, and plenty of evidence to suggest that it erodes police community trust, that it results in more violence against civilians. That is the strategy that conservatives are trying to double down on, is creating more violence to respond to violence.

That’s just something that we can’t do, that will not work for our kids, will not work for our communities. What we need to be doing is following the examples of other countries that in response to incidents like mass shootings have implemented much more far-reaching gun control measures that have entirely restricted and in many cases, eliminated the prevalence of assault weapons—in some cases, semiautomatic hand guns and other weapons—from society. I think that should be the goal.

We shouldn’t have a society where people have weapons that can kill scores of people. We’re a society of over 300 million people, and it’s not sustainable to expect 300 million people to be able to manage such a powerful weapon system like that in a responsible way. So, we need to be looking at what’s working in other countries, implementing that here and following the lead of states and cities that are taking the lead on this issue.

For example, passing assault weapons bans like have been passed in eight states. Passing rules that make it much harder for people who have a history of domestic violence from getting access to a gun. Creating waiting periods where you cannot just buy a gun whenever you want. You have to wait, which means if you are in a particular mood and you just flipped out and want to be violent, you can’t just get access to a gun immediately.

There are some common-sense measures that we can implement right now as we move towards the goal of a broader society that is not as prevalent with guns and prolific with so many different killing instruments. And, we’re actually investing in people, in what makes us healthy, what makes us safe, what helps us learn—and not what kills one another.