Trump tweeted that the US should recognize Israel's annexation of Syria's Golan Heights, which Israel has been occupying for 52 years. TRNN's Shir Hever explores what this means for the region

Trump tweeted that the US should recognize Israel's annexation of Syria's Golan Heights, which Israel has been occupying for 52 years. TRNN's Shir Hever explores what this means for the region 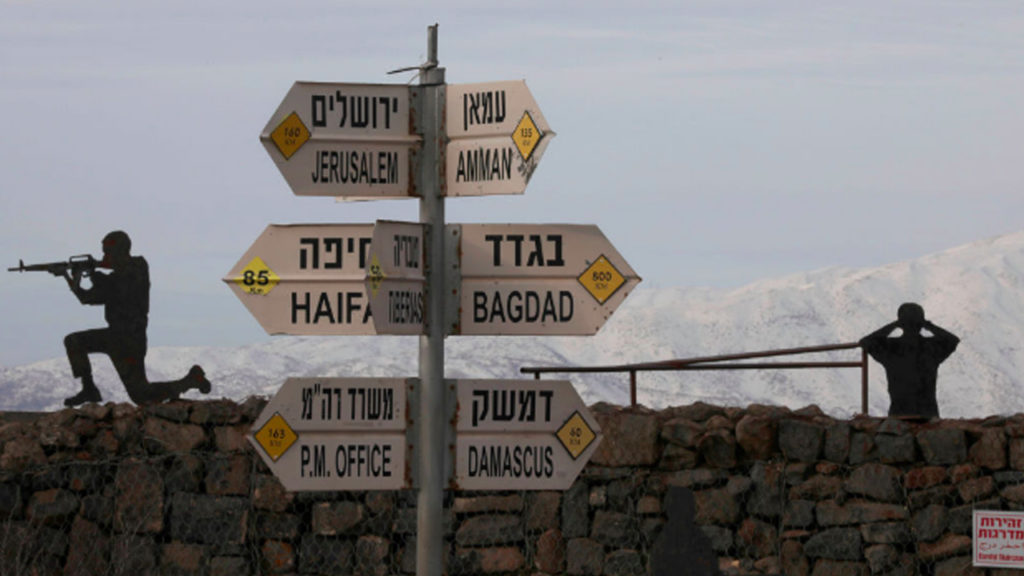 On Thursday, Trump suddenly tweeted the following message: “After 52 years, it is time for the United States to fully recognize Israel’s sovereignty over the Golan Heights, which is of critical strategic and security importance to the state of Israel and regional stability.”

The Syrian Golan is a plateau that the Israeli military conquered from Syria in the June war of 1967. The Israeli military ethnically cleansed the Syrian Golan, expelling over 100,000 Syrian citizens and colonizing it with Jewish Israeli settlements. Currently about 50,000 people live there, half of them of Jewish Israeli descent, and half Druze Syrians under military occupation. In December 1981, the Israeli parliament, the Knesset, passed a law to annex the Syrian Golan into Israel, in violation of international law, that no other country has recognized so far.

Joining me now to discuss the implications of this tweeted policy intention of President Trump is Shir Hever. Shir is a Real News Network correspondent in Heidelberg, Germany, and his book The Privatization of Israeli Security was recently published by Pluto Press. Thanks for being here today, Shir.

GREG WILPERT: So what is the basis, first of all, for Israel’s claim over the Syrian Golan?

SHIR HEVER: Well, the Israeli claim really does not rest on any religious claims or any legal claims, but mainly on the issue of strategic value and security value that Trump mentioned in his tweet. And if you really look at this at face value it boils down to might makes right. The Israeli government basically said because our army was able to wrest the Syrian Golan from Syria, it’s ours now. And this is a very strange base for international diplomacy. The only thing that allowed Israel to get away with it is the fact that the Syrian government was not considered a legitimate government or a legitimate state by Europe and the United States for many decades.

GREG WILPERT: So now what could be the implications of the U.S. recognizing the Israeli annexation?

SHIR HEVER: Because all the borders that we have in the Middle East are actually colonial borders that were set up by the French Empire and the British Empire as they divided these territories between them, any kind of changing of these borders has to be justified somehow. And those changes or those wars sometimes happen because of religious or ethnic or economic reasons. But when we’re talking about the border between Syria and Israel, then we only have the justification of the Israeli military just being stronger. And it was stronger in 1967, and again in 1973. But that’s not necessarily going to be the case forever.

So the implication is that the legitimacy of these borders all over the Middle East is challenged. If the United States is going to come up with a new policy that they’re going to just accept might makes right all over the Middle East, then why shouldn’t Egypt conquer Saudi Arabia? Why shouldn’t Iran conquer Jordan? You know, some countries have stronger militaries than the others, and they can just take over their resources and take over their land. And I think that can lead to a lot of destabilizing, ultimately, and the suffering of millions.

GREG WILPERT: Now, finally, one last question. How is Trump’s statement related to the war in Syria that’s been raging since 2011?

SHIR HEVER: One of the things that this war has taught us is that the Israeli military argument, as if this plateau, the Syrian Golan, is important for the Israeli border, to defend their borders, has been proven wrong. Because, in fact, modern warfare is no longer dependent on who has the better elevation, and what kind of incline the tanks have to climb, but rather on issues of legitimacy and diplomacy and the loyalty of the local population.

During the civil war in Syria, the Israeli government was very deeply involved, still is very deeply involved. They’ve supported, among other groups, the Nusra Front, which is loosely affiliated with al Qaeda, and have provided them with various materials. But what we saw is that the Syrian Golan played no role in protecting the Israeli border from the fallout from that civil war, because when that front, the Nusra Front, was making a lot of progress and was actually gaining territory and driving away, driving back their opponents, that started a rebellion inside Israel. And especially in the occupied Syrian Golan, which is not part of Israel, but Trump thinks it is. And that forced the Israeli military to stop supporting the Nusra Front, because the political ramifications of sending in their mercenaries or proxies to kill Druze people in Syria, when the families of these people are under Israeli control and they refuse to accept it, shows that what really matters in contemporary wars is not who has the upper ground, but rather who has the upper moral ground.

GREG WILPERT: Well, we’re going to leave it there for now. But of course we’re going to continue to follow this as it develops. I was speaking to Shir Hever, Real News Network correspondent in Heidelberg, Germany. Thanks again, Shir, for having joined us today.