Sunday's presidential debate in Mexico showed that as AMLO maintains his almost insurmountable lead, the other candidates are trying to copy his platform about raising wages and resisting Trump. John Ackerman reports from Mexico

Sunday's presidential debate in Mexico showed that as AMLO maintains his almost insurmountable lead, the other candidates are trying to copy his platform about raising wages and resisting Trump. John Ackerman reports from Mexico 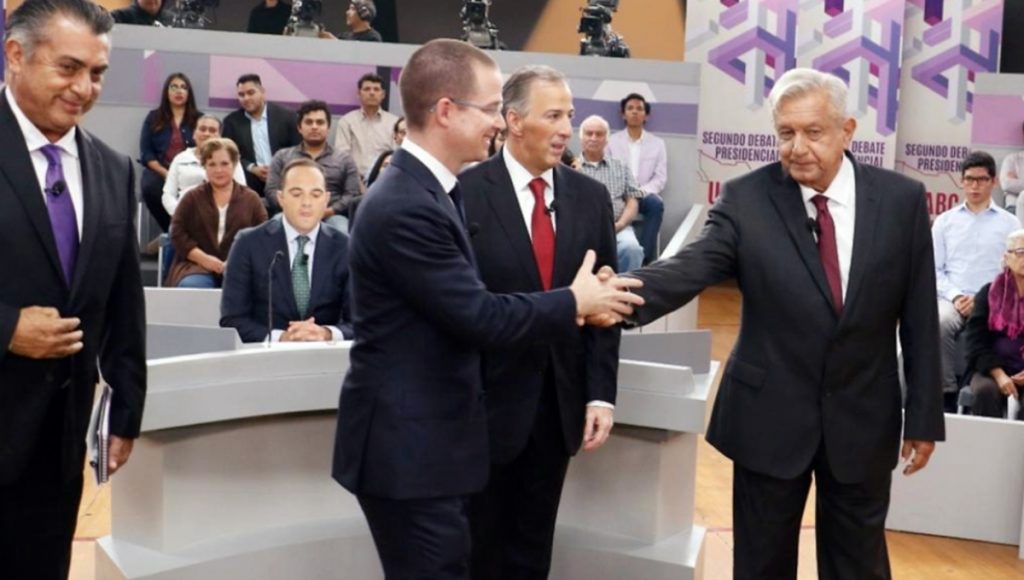 SHARMINI PERIES: It’s The Real News Network. I’m Sharmini Peries, coming to you from Baltimore. Mexico’s presidential candidates held their second televised debate on Sunday, and one of the main topics of discussion was President Trump. By and large, all candidates agreed that Mexico’s autonomy matters, and it needs to be firmer towards Trump and to put Mexico’s interests first.

Meanwhile, new opinion polls show that leftist candidate from the Morena party, Andrés Manuel López Obrador, AMLO, is maintaining his extensive lead over the other three candidates. At least forty one percent of voters say they would vote for AMLO. His nearest rival, Ricardo Anaya, from the conservative National Action Party, who is polling at twenty-six percent. We have two clips here for you. One is Andrés Manuel López Obrador at the debate on Sunday.

ANDRÉS MANUEL LÓPEZ OBRADOR: The best foreign policy is the internal one. If they, the United States, threaten us with building of walls and with sending troops to the border, with persecuting our countrymen and women, what we have to do is strengthen our economy, so that there is work in Mexico, so that people don’t need to migrate.

RICARDO ANAYA: It was a historical and unacceptable mistake to receive Donald Trump in Los Pinos, when the man had been campaigning for a year, insulting and attacking Mexicans. They didn’t even bother to read Trump’s books. His philosophy is clear- to provoke the opponent. If the opponent is weak, I will squash him or her. If the opponent is strong, I negotiate.

SHARMINI PERIES: Mexico’s presidential elections will be held on July 1st. Joining me now to analyze the latest developments in Mexico’s presidential campaign is John Ackerman. John is professor at the National Autonomous University of Mexico, UNAM, and editor-in-chief of the Mexican Law Review, and a columnist for the publications, La Jornada and Proseco. Good to have you back, John.

SHARMINI PERIES: All right, John. Let’s start off with Sunday’s debate. What were the main issues, and how did the different candidates do?

JOHN ACKERMAN: So, the second debate was focused on issues of international relations with the United States, migration, human rights. international commerce. Those were the central topics that were on the table. The opposition- well, actually it’s funny, this word opposition, because actually López Obrador is the opposition candidate. But since he’s ahead, he’s turned into the guy to beat. So, the PAN and the PRI candidates, who are opposing López Obrador, who are with the sitting government, have been hoping for the debates to be their crucial moment to shift the tide in their favor.

Because you know, López Obrador is more comfortable speaking at longer lengths to larger groups of people, are in dialogue directly with the citizens. But this format of one-minute or two-minute interventions, based on the American model, is not really his safe spot. But actually, he did pretty well. I think, probably, it has to do with the topics that are on the table, because the failures of Mexican diplomacy towards the United States are so evident, and they’ve been so constant over the last few administrations, both the PRI and the PAN.

So, López Obrador has, sort of, an easy shot at arguing that he would be different, and that this difference is necessary. The opinions of Trump in Mexico, of course, continue to tank, go down, every time he tweets, every time he threatens the Mexicans, or calls migrants “animals.” This definitely affects Mexican public opinion and convinces people that they really want a change. Now, Anaya is an interesting candidate. He’s the one you had the clip on, the right-wing candidate, the Christian Democratic candidate, and he basically spent the debate copying López Obrador’s ideas.

He, all of a sudden, came out as this “great patriot” trying to defend Mexico from the United States and stand up to Trump. He’s even going beyond López Obrador’s proposals, proposing suspending all cooperation with the United States, really sort of putting out these ideas which have nothing to do with his platform or his base of support, actually. This is just sort of a demagogic attempt to rile up support for him, because he continues to be fifteen, twenty percent behind the polls.

SHARMINI PERIES: All right. Now, López Obrador proposed an alliance for progress that would include Mexico, the U.S., Canada, and Central America. This is very interesting, given that NAFTA is being renegotiated in the North American context. Now, is this a new proposal that he is suggesting? And tell us more about it.

JOHN ACKERMAN: Well, he’s been talking about this kind of stuff all along. He’s never come out against NAFTA. He used to be more critical, now he’s- what he’s proposing is to embrace NAFTA, embrace North America unity, but based on economic cooperation, instead of military support. Because one of the central planks right now in U.S.-Mexico relations is the drug war. Mexico receives millions of dollars, still, under the Mérida plan, which is out of date, but it’s still technically enforced.

And so, what López Obrador proposes is, let’s change the nature of the relationship, make it more based on economic cooperation support. He mentions the Alliance for Progress, trying to bring back the image of J.F. Kennedy. López Obrador also, not in this debate, but he also cites frequently Roosevelt. He’s trying to appeal to the United States itself, trying to invite the United States reflect, to think about things, and to change course, and to see Mexico as a partner, instead of an enemy, as Trump is increasingly directing his darts at the Mexicans in general.

SHARMINI PERIES: John, all four candidates seem to agree that Mexico needs to raise wages and its living standards in order to be on a more equal footing with the U.S. Now, presumably they disagree on how to do that. What are the two main frontrunners, AMLO and Anaya, proposing in this regard, and are they different?

JOHN ACKERMAN: Well, the four candidates are divided really in half. So, in the debate itself, Meade, the PRI candidate, Pena Nieto’s party, and El Bronco, who is our Trump, Mexican Trump- he’s running on an independent platform, supposedly- they both came out pretty explicitly against raising the minimum wage. They say that the wages should go up, but based on increasing investment, increasing globalization, using those general words without actually trying to demonstrate how this increased investment could somehow actually increase wages. Because what’s happened over the last twenty years is that the increase in international investment has basically left those wages the same.

On the other hand, we have López Obrador, and Anaya. See, Anaya, you don’t know where he stands. He’s just- basically, he’s copying López Obrador’s platform. So, they’re both saying, Anaya and López Obrador, that we need to raise the minimum wage. López Obrador has explicitly said that he agrees with Trump on that single point. You know, Trump has said that he doesn’t want to sign NAFTA, or resign NAFTA, continue NAFTA with Mexico, unless the wages go up in Mexico to take- avoid the inequalities for businesses, which, according to him are created by this discrepancy.

And so, López Obrador totally agrees with that. He says, yes let’s bring up the minimum wage so that Mexican workers get the same chance as American workers. Anaya says exactly the same thing. It’s funny because Anaya is a right-wing candidate, and he’s the- sort of repeating the López Obrador proposals. Not quite credible, though given his own political background, as you know, that he was the speaker, the coordinator for the PAN legislative group during- between 2012 and 2015. And he never put any of these proposals on the table when he was actually in power and in Congress.

SHARMINI PERIES: John, recently a report has surfaced in Mexico that a company that belongs to Carlos Slim, who is Mexico’s- one of the richest people in the world, a billionaire, is providing cybersecurity for the July 1 elections. Now, this should send chills up people’s back. Tell us more about this controversy, and how that all came about, and what does it mean?

JOHN ACKERMAN: Slim is everywhere in Mexico. He’s the richest man in Mexico, one of the richest in the world. So, the fact that the electoral institute has hired his company instead of others- he’s the telecommunications mogul in Mexico, to protect cybersecurity is not a surprise. What is interesting is that people are so upset about it. That’s a great- I think that’s wonderful, that people are concerned about Slim getting involved in the INE, which is the National Electoral Institute. And they’re right, they’re right. You know, Slim has come out against López Obrador. He is not an independent politician or- he’s businessman, but his political views are by no means neutral.

And so, yes, this definitely implies serious concern, especially because previously, the cybersecurity of the National Electoral Institute was supposed to be under the charge of the National Polytechnic Institute, which is a big public university, dedicated precisely to technological questions. So, there’s in general, just lots of fear, which can even get to paranoia sometimes, about the possibility of a fraud this July 1. If Mexico were a real democracy- but now we’re five six weeks out of the elections, López Obrador is twenty points ahead in the polls- this would be pretty much of a done deal.

But that’s the big question for the month of June, the coming weeks, is to what extent the powers that be are really going to try to infiltrate the national electoral authorities, purchase, massively, votes and voters. We’re getting enormous amounts of reports at the initiative I run at the National University, at the UNAM. We’re giving legal advice to people who have been victims of or witnesses of electoral crimes or irregularities. Just this last week, we’ve been getting an avalanche of all sorts of complaints of citizens who are being offered a thousand pesos up to two thousand pesos for their electoral cards.

People who work at major private corporations, at malls, are the Palacio de Hierro, which is like one of the major stores in Mexico, have been invited to meetings by their bosses, basically to be convinced to vote against López Obrador. People and unions are getting, are receiving, are being pressured to put up PRI propaganda or to vote for the PRI. And so, the system, both the economic and political power, is moving into action to try to beat the polls, try to beat public opinion, and that’s going to be the big struggle over the next few weeks. Will the Mexican people actually be able to express their authentic will and desire this upcoming July 1?

SHARMINI PERIES: All right, John. I thank you so much for joining us today, and we’ll be back to you next week.

SHARMINI PERIES: And thank you for joining us, here on The Real News Network.