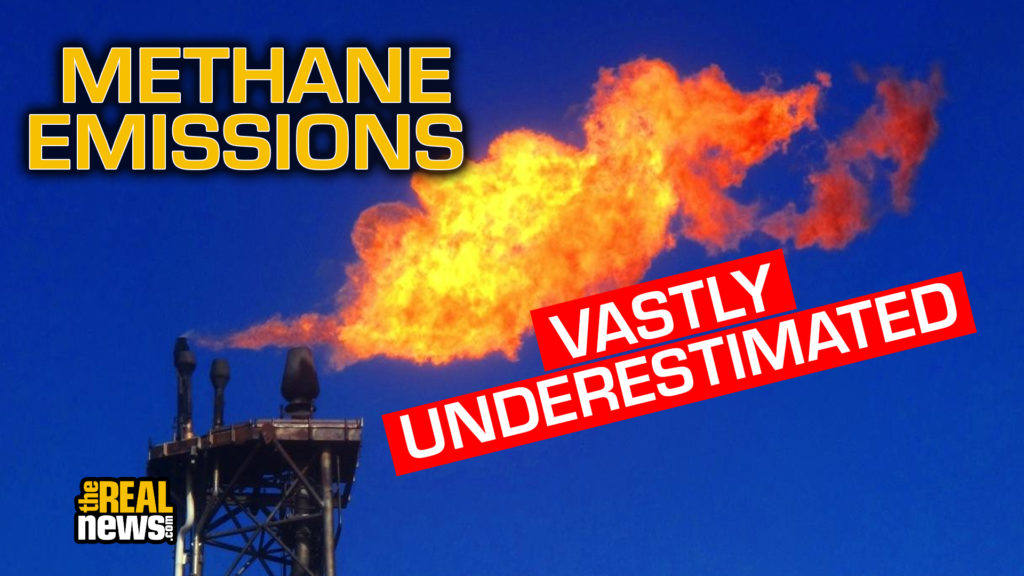 According to a new study, methane from the extraction and use of fossil fuels may have been “severely underestimated.” The research indicates that natural or biogenic emissions of fossil methane, that seep out of deeply held reserves make up a much smaller fraction of the global increase in methane emissions than previously thought. This means that the levels of fossil methane in the atmosphere are likely being driven by the methane escaping as coal, oil and natural gas, are mined, drilled, and transported.

The findings of the study are particularly worrisome because methane is a powerful greenhouse gas with a global warming potential of up to 80 to 100 times greater than CO2 in a 20 year timeframe. Scientists say this is the critical time period during which the world must take sweeping action to prevent irreversible damage from climate change.

Now here to discuss this study with us is ecologist Robert Howarth. A David R. Atkinson Professor of Ecology and Environmental Biology, Dr. Howarth is the founding editor of the journal Biogeochemistry and served as editor-in-chief for more than 20 years. Thanks for joining us today, Dr. Howarth.

ROBERT HOWARTH: Pleased to be with you. Thank you.

DIMITRI LASCARIS: First of all, could you tell us about the essential findings of this study, Dr. Howarth? And please talk to us a bit about the methodology that its authors employed.

ROBERT HOWARTH: Sure. It’s an important paper. For background, we’ve known for 20 years, at the end of the 20th century, about 30% of all the methane that is amid the atmosphere has come from ancient fossil sources. We knew that from the measurement of the average amount of radiocarbon-14 that’s naturally in that methane. Up until this new study and a previous one by the same lab, the Petrenko Lab at the University of Rochester, most scientists that assumed that of that methane that’s coming from these ancient fossil sources, some of it was coming from natural geological seeps and some of it was coming from the fossil fuel industries: oil, gas and then coal.

What the new papers shows, they took cores of ice from ice sheets. They extracted the methane from that ice. They need about a ton of ice per sample, and then they again, measured the amount of C-14, the radiocarbon methane that is in that. What they have determined is that over virtually all of the last 10,000 years or so, right up until the time of the Industrial Revolution, there was no methane to speak of coming from natural geological seeps. The methane sources naturally overall of that time period, were coming from wetlands and lakes and sources of that sort. So what that means is that we’re underestimating the methane source as of the end of the 20th century. And more recently, of that 30% of the total flux, none of it’s coming from natural seeps, probably–or very little. It’s mostly from the fossil fuel industry.

DIMITRI LASCARIS: So just to be clear, according to the study, what is the degree to which we have been underestimating methane emissions from the fossil fuels industry?

ROBERT HOWARTH: This increases our estimate of what the fossil fuel industry would be by say 40% to 50%, 45% something like that. So it’s a big increase. Then there are other reasons to believe it. The new finding is consistent with, I think, an increasing body of literature of measurements made on the ground too suggesting that many people have been underestimating the importance, particularly from the oil and gas industry.

DIMITRI LASCARIS: Since this study was published, some have observed that there is a positive side to this news and that the study’s results mean that there is a greater opportunity to cut methane emissions. What are your thoughts on that?

My research and that of many others suggest that somewhere in the neighborhood of about 3.5% Of the natural gas that’s developed in North America is emitted to the atmosphere unburned as methane. So that’s a fairly small percentage, 3.5%. Most of it were getting to market and burning. And yet, that 3.5% is the magnitude that we’re talking about. It’s a huge global flux and globally important in terms of the climate change. Can we reduce that 3.6% to 1.8%? Maybe, but it’s not easy. So I think really what this is is another call for why we need to move away from fossil fuels.

DIMITRI LASCARIS: You mentioned just a moment ago your prior work in this area. For those not familiar with your work, Dr. Howarth, you and your colleague, Anthony Ingraffea, cut against the grain at the dawn of the fracking boom in 2011, publishing a study finding that fracking in the Marcellus shale could do more to exacerbate global heating than mining coal. You and Dr. Ingraffea were heavily attacked by the gas industry for your work. Among other work that you have published since, you also authored a paper last year, which found that since the use of fracking shale, gas has increased in its share of global natural gas production and has released more methane into the atmosphere. Do you feel that this new study on methane emissions vindicates the work that you and Dr. Ingraffea have done on this issue over the past number of years?

ROBERT HOWARTH: I don’t know if I’d use the word, “vindicate,” because I don’t really feel like we’ve been attacked, but sure. The paper that professor Ingraffea and I put out is just a little under nine years ago. It was the first ever paper where anyone had looked at how much methane might be admitted from using shale gas and what it meant in terms of its climate ramifications. We said in the paper, the data which were available to us, we were using unpublished data from industry sources and from the US environmental Protection Agency. The data were not easy to verify.

So in our conclusions, we’re strongly qualified. We said that what was needed is to get better data, but if our findings were to hold up, then yes indeed, the methane emissions from developing shale gas would more than offset the carbon advantage, the CO2 advantage from switching from coal to natural gas. When you burn natural gas, you admit less carbon dioxide than coal, but you’ll meet a lot more methane. Since methane is roughly a hundred times more powerful as a greenhouse gas, that offsets it.

We postulated that nine years ago and what we hoped would happen has happened, and that is that hundreds of other scientists have gotten involved. There are now well over 1,400 peer reviewed papers published in this area all in the nine years since our study. They don’t all agree, but the science has been moving towards a consensus pretty strongly new over the last few years. I think the number I threw out a bit ago, 3.5% of the methane that’s produced being leaked to the atmosphere is strongly supported by most of the literature now. This new paper, yeah, it’s entirely consistent with that view. So I’m feeling good about the science. I’m feeling bad about climate change and the contribution of the fossil fuel industry to it. But it means that we not only need to get rid of coal, we need to get rid of natural gas as well as quickly as we can.

DIMITRI LASCARIS: Lastly, Dr. Howarth, the climate debate in general has changed a lot in the United States. Since your 2011 study came out, Barack Obama fully backed the fracking boom and concerns over methane, got swept to the side until late in the administration’s second term. Under the current administration, we’ve seen a rather vigorous and unchecked support for the fossil fuels industry. What do you make of the debate in the Democratic Party presidential primaries today from the perspective of dealing with this problem, in particularly, the problem with fracking and methane emissions? Do you think that this is a subject within the debate that has being given sufficient attention?

ROBERT HOWARTH: No. Climate change in general hasn’t gotten sufficient attention in the debate. The last debate barely touched on climate. The debate the week before had more on climate. There’s a pretty strong contrast. If we go back to the Obama administration, you’re correct. President Obama more or less endorsed fracking and saw natural gas as a bridge fuel. I think he was wrong. He was changing his mind towards the end, and I gave an invited briefing to senior staff at the White House in May of his final year. I think they were strongly coming around.

But of course, President Trump sees no worry from climate change and there’s no fossil fuel he doesn’t like. So the Democratic Party really needs to come forward with candidates that address that. I think we have a pretty sharp… The candidates have said enough to show us that there’s a divergence of views. Elizabeth Warren and Bernie Sanders clearly have opposed fracking, understand that methane’s a problem, understand that natural gas is not a bridge fuel and we need to move on. They’ve clearly said that; Mayor Bloomberg, Pete Buttigieg, Joe Biden, not so much. They tend to fall back on this language still that may be natural gas is a bridge fuel and they have not been critical of fracking at all. So the Democrats have a clear choice.

DIMITRI LASCARIS: Well, we were speaking to Dr. Robert Howarth about a new study relating to the emissions of methane from the fossil fuels industry, showing that they had been vastly underestimated. Thank you so much for joining us today, Dr. Howarth.

ROBERT HOWARTH: Thank you for your interest. Appreciate it.