Analyses of the media coverage of hurricane Florence show that most outlets leave out the link to climate change and the real dangers the hurricane presents for creating toxic spills. We speak to Lisa Hyams of Media Matters for America

Analyses of the media coverage of hurricane Florence show that most outlets leave out the link to climate change and the real dangers the hurricane presents for creating toxic spills. We speak to Lisa Hyams of Media Matters for America 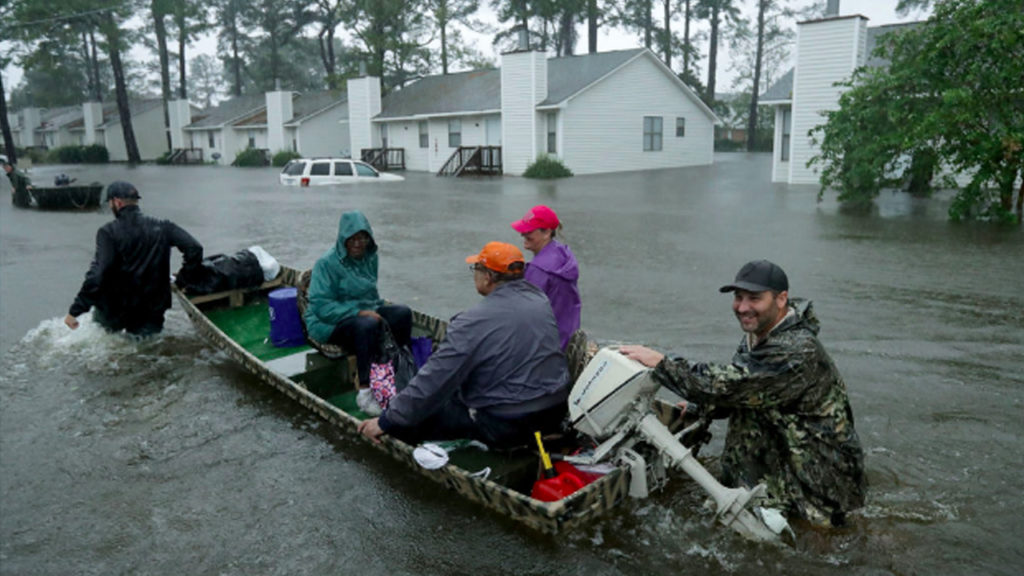 Today we look at Hurricane Florence and two important issues that relate to this major event. One is the media’s coverage of the ties between climate change and hurricanes. Another is a story that demands media attention, how hurricane-caused spills from coal ash pits and hog manure ponds in North Carolina, which is in the path of the hurricane, could harm low income People of Color. Our guest is longtime climate journalist, Lisa Hymas, director of the climate and energy program at Media Matters and senior editor at Grist. She joins us from Washington, D.C. Thank you for joining us today, Lisa.

LISA HYMAS: Thank you for having me. Happy to be with you.

DIMITRI LASCARIS: So, Lisa, let’s start with something Media Matters and Public Citizen reported on last year. They found that major outlets dropped the ball while covering hurricanes. They often did not connect them to climate change, and after Hurricane Harvey, a devastating hurricane, two groups of scientists published studies that link the record breaking rainfall to climate change. Now scientists are warning of a similar pattern of rainfall and effects from climate change, and last year, your reporting revealed that the media’s lack of coverage on this connection was quite significant. Thus far in your view, have the media done a better job of covering Florence and its to global warming?

LISA HYMAS: Well, it’s been a mixed bag so far. I mean, you are definitely right that coverage last year was very poor, coverage that connected the devastating hurricanes that we saw to climate change. So, we here at Media Matters did an analysis of broadcast news coverage of Hurricane Harvey and found that both the ABC and NBC never once mentioned climate change in all of their coverage of Hurricane Harvey. And we found that they didn’t do much better on Irma or Maria either. And as you said, Public Citizen is another organization that has done some analysis on this, and they looked at TV coverage and radio and newspapers last year, major newspapers, and found that just four percent of the stories about last year’s hurricanes mentioned climate change.

So, that is much less coverage than this issue deserves. I mean, not every story about a hurricane needs to mention climate change, but we should be seeing a lot more explanation to Americans of the ways that climate change exacerbates hurricanes and makes them more dangerous. So, this year so far, we have seen some good coverage explaining how climate change is making hurricanes worse, and even making Hurricane Florence in particular worse. So, I’ve been encouraged by some of the coverage that I’ve seen in outlets like The Washington Post, but also some regional newspapers like The Baltimore Sun and The Miami Herald have been explaining this connection.

On the other hand, we’ve seen some bad work in this area. Particularly, I’ve been looking at what USA Today has been doing. So, the paper USA Today ran a decent editorial this week talking about the connections between climate change and hurricanes, but then they ran a couple of pieces on their editorial page that disputed the link. And one of one of them outright denied that climate science is a settled thing. And another piece that they published was by a known climate denier who argued, contrary to the science, that we can’t see any influence of climate change on hurricanes. So, I’m optimistic by the good coverage that I’m seeing, but we still have a ways to go.

LISA HYMAS: You know, I believe you’re right but I’m not actually sure.

DIMITRI LASCARIS: Okay. Now let’s move on to the recently loosened rule on coal ash disposal. This was the first Obama-era EPA rule changed by new incoming acting head of the EPA Andrew Wheeler. This move saves power companies like Duke Energy in North Carolina millions of dollars. But as Duke University’s Avner Vengosh observed in terms of the environmental impacts of coal ash, scaling back requirements in particular could leave communities vulnerable to potential pollution. And he said, “We have clear evidence that coal ash ponds are leaking into groundwater sources.

The question is, has it reached areas where people use it for drinking water? We just don’t know. That’s the problem.” How do you assess this problem, and is there anywhere in the country where sufficient groundwater testing is taking place?

LISA HYMAS: That’s a good question. I mean, we’re really concerned and a lot of people are concerned right now about these coal ash pits in North Carolina in the path of the storm. Coal burning power plants create massive amounts of toxic waste and they’re stored oftentimes alongside rivers and waterways in these pits, or sometimes they’re called ponds, that oftentimes aren’t properly lined, they’re not properly covered. Even when there isn’t bad whether, they can leak into waterways. So, there’s a lot of worry right now that if there is substantial flooding, major winds, that could really contaminate water supplies.

I mean, one of the real problems here is that that is likely to hurt low-income folks the most. They’re the ones who tend to live near power plants. They don’t put power plants in rich neighborhoods, they tend to be located near low-income people and minority communities. And so, the media and public health officials definitely need to be watching whether there are spills that will affect drinking water supplies.

DIMITRI LASCARIS: And I understand another important aspect of this that you have been imploring the media to cover is hog farms and their impact on low-income communities of color in North Carolina. While some of the print press seem to be on top of one aspect of the story namely, the dangers of hog waste getting into local waterways, you bring up a part that they are missing, which could potentially have profound impacts on the type of pollution on People of Color, and also, the role of the Trump administration loosening of regulations that could make these spills more likely.

North Carolina is home to thirty-one coal ash pits that house around, as I understand it, one hundred and eleven million tons, a stunning amount, of toxic waste produced by hogs. These ponds store about ten billion pounds of waste. Now, with the heavy rain from Hurricane Florence, this creates, as you call, it a “noxious witch’s brew that might be headed into people’s homes and drinking water. Please elaborate a little bit about the nature of this threat and whether you think enough is being done both to deal with the threat and to cover the threats, to make the public aware of the threat.

LISA HYMAS: Yeah, so you’re are exactly right. I’ve been glad to see that some outlets in the past few days have written about the danger of spills from hog manure waste pits as well as coal ash pits, but none of them have been picking up on the environmental justice angle and the people who will be hurt the most by this. Just as power plants tend to be located by low-income and minority communities, so do hog facilities.

So, North Carolina is home to many, many industrial hog facilities. You might call them factory farms, or the industry calls them concentrated animal feeding operations or CAFOs, but factory farms pretty much captures it. So, you have huge numbers of hogs in small confined spaces, and they produce massive amounts of waste. And that waste is, again, like the coal ash, oftentimes stored in pits that aren’t properly protected, that can overflow near waterways. And that waste is really noxious stuff that could have serious impacts on water quality.

DIMITRI LASCARIS: As most of the nation’s scientific community has expressed, extreme weather patterns appear to be on the rise. And as California’s governor Jerry Brown discusses, his state’s devastating wildfires are the new normal. North Carolina appears to have seen it a little differently in 2012, when the GOP-controlled state legislative body passed a law banning state officials from considering the latest science regarding sea level rise when doing coastal planning. The law was drafted in response to an estimate by the state’s Coastal Resources Commission that sea level will rise by thirty-nine inches in the next century, prompting fears of costly were home insurance and alarm from many quarters.

But residents and developers in the state’s coastal Outer Banks region pushed the bill, signed by a Republican Governor, saying, “if science gives you a result you don’t like, pass a law saying the result is illegal.” I’m sorry, that actually was a comment by Stephen Colbert, not by the Republican governor. However, as you write, the problem is not solved. Will Hurricane Florence and the pro-environmental Democrat Roy Cooper, who was elected governor in 2016, in your view, be able to mute the influence of developers and Republican majority legislature in that state? How does this become something that we solve in North Carolina given the political realities?

LISA HYMAS: I think it’s going to be a challenge. I mean, you’re right to contrast California, which is really pushing ahead and trying to prepare for climate change and trying to fight climate change, with a state like North Carolina, where they really have been trying to move backward and pretend that climate science doesn’t even exist. I’ll be curious to see whether Hurricane Florence has some influence on that. When people’s homes are damaged or destroyed and their lives are affected and their communities are hurt, sometimes they can get a new view on things and maybe come to realize that climate change isn’t just an idle threat, but it’s something that’s already happening right now to communities.

So, I am hopeful that North Carolina can start moving in a more realistic direction, both preparing for climate change and fighting it, but we we will have to see. They don’t have a great record so far.

DIMITRI LASCARIS: Well, we’ve been speaking to Lisa Hymas about Hurricane Florence, the media’s coverage of this major weather event and its connection to climate change, and the political rallies in North Carolina. Thank you very much for joining us today, Lisa.

LISA HYMAS: Thank you for having me on, it’s been great to talk to you.

DIMITRI LASCARIS: And this is Dimitri Lascaris, reporting for The Real News.