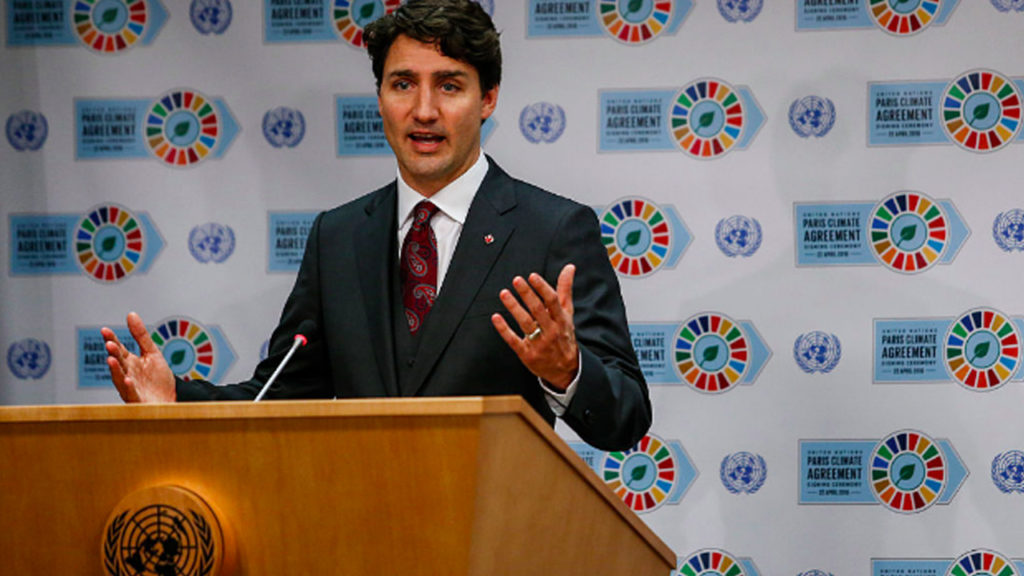 DIMITRI LASCARIS: This is Dmitri Lascaris, reporting for The Real News from Montreal, Canada.

In March 2018, an op-ed in the British newspaper the Guardian asked, can climate change litigation save the world? That proposition is about to be put to the test in the Canadian province of Quebec. This week, a Montreal law firm, Trudel Johnston & Lesperance, filed a massive class action against the government of Justin Trudeau alleging serious violations of constitutional rights arising from the Trudeau government’s failure to take necessary action to respond to the climate crisis.

The class action complaint begins with these words: What is the purpose of a government if not to protect the lives and safety of its citizens? The facts outlined in this proceeding reflect an intentional assault on the part of the Canadian government for more than 25 years regarding climate change and the impact of this fault on the lives of young Quebecers. The government of Canada has behaved irresponsibly, and has failed to take action to prevent a serious threat posed to its people by climate change. These failures constitute an infringement of its citizens fundamental rights, especially the right to life and security of the youngest generations. While recognising the urgency to act and the serious dangers posed by climate change, the Canadian government has done virtually nothing.

The plaintiff in this proposed class action is a nonprofit organization called Environment Jeunesse. Created In 1979, this organization is dedicated to environmental education. In the lawsuit, it seeks to act on behalf of approximately 3.5 million Quebecers who are 35 years old or younger. This case is the latest in a series of major climate change related lawsuits launched around the world. Further cases are underway in the United States, India, Uganda, the UK, Ireland, Belgium, Portugal, Norway, and Colombia.

Now here to discuss the Quebec litigation with us is Catherine Gauthier, executive director of Environment Jeunesse. Catherine has a master’s degree in international law and international policy. In 2005 at age 16 she addressed 10,000 delegates at the conference of the parties to the United Nations Framework Convention on Climate Change. She was invited to speak at the UN General Assembly two years later. And she joins us today from Montreal. Thank you for coming onto The Real News, Catherine.

CATHERINE GAUTHIER: Thanks for doing this.

DIMITRI LASCARIS: So Catherine, according to the complaint, Canada has contributed disproportionately to the climate crisis. Could you tell us more about the role historically that Canada has played in creating this crisis?

CATHERINE GAUTHIER: Historically, Canada has been emitting a lot of greenhouse gas emissions. Actually, even if we ratified the Kyoto Protocol and the Paris agreement, our GHG emissions have been increasing significantly over the years. And today, as of 2018, we’re clearly not doing enough to reduce our emissions. And in doing so, Canada is violating our rights to a safe environment.

DIMITRI LASCARIS: Within weeks of his election in late 2015, after 10 years of a Stephen Harper government that was openly hostile to action on climate change, Justin Trudeau went to the UN climate conference in Paris and famously, or infamously, declared that Canada is back, that we’re here to help. And so impressive was his performance at the Paris climate conference that even the Green Party of Canada leader Elizabeth May, who for years had criticized Canadian government inaction on climate change, declared in Paris that she was over the moon. About the position taken by the Trudeau government. What is the reality of how the Trudeau government has performed since its election in May 2015 when it comes to the climate crisis?

CATHERINE GAUTHIER: The situation in reality is totally different than what we’ve heard the Canadian government saying. Unfortunately, if Canada has been playing a leadership role in concluding the Paris agreement, we have not yet increased our ambitions in terms of what we should do to reduce our emissions. So in fact, Canada has still no plan to reduce our emissions. We don’t even have a target that is ambitious enough to avoid the worst impacts of climate change. So now are demanding more than words. We don’t and need more words, we need more concrete actions, and scientific results, as well.

DIMITRI LASCARIS: Now, I understand that the emissions reduction target adopted by the Trudeau government after the conclusion of the Paris climate accord is the same one. that had been adopted, at least officially adopted, by the Stephen Harper government, and that that emissions reduction target had been criticised by Justin Trudeau when he was in opposition. Let’s just talk about, let’s put aside the moment the inadequacy of the target, and just talk about whether or not the government is on track to achieve even that target, the target that Stephen Harper’s government set. Are we realistically going to do that, given the current trajectory?

CATHERINE GAUTHIER: Given the current trajectory and actions that have not been in been in place, we are not even able to respect that insufficient target. And even at the federal level we do have scientific reports that have been warning the Canadian government that we’re clearly not doing enough, and that we’re off track, this insufficient target. So there’s a huge gap in terms of what the science says we should be doing and what the reality is.

DIMITRI LASCARIS: And please talk to us about the recent effects of climate change in this jurisdiction in the province of Quebec. How are Quebecers feeling this crisis?

CATHERINE GAUTHIER: Last summer in Montreal and around, we have had a severe heat wave that killed 100 people, which was probably a defining moment in terms of realizing how severe the impacts of climate change could be. And we also have seen several floods in different regions of Quebec. Soil erosion, as well, where roads have been blown away after severe storms. So we are already experiencing climate change impacts, as well as new diseases, like the Lyme disease that we’ve been hearing a lot about.

DIMITRI LASCARIS: And finally, please tell us a little bit about the legal basis of the suit. Which legal rights does your organization say the Trudeau government is violating by failing to address the climate crisis?

CATHERINE GAUTHIER: The Canadian government is violating our right to life, to security, and to equality, as well. Because we talk about intergenerational equity, which means that future generations and actual generations should have an equal right to life and security. And but the Quebec charteralso provides new grounds in terms of legal actions, because it provides–it should ensure the right to a safe environment and to biodiversity to all its citizens. So there might be more tools that we can advocate for.

DIMITRI LASCARIS: Well, we’ve been speaking to Catherine Gauthier, the executive director of Environment Jeunesse, a plaintiff in a new massive climate change lawsuit launched in the province of Quebec. Thank you very much for joining us today, Catherine.