Yet another massacre of indigenous leaders in Colombia has sparked outrage across the country, as the right-wing government of President Ivan Duque faces increasing challenges to his already weakened leadership.

Yet another massacre of indigenous leaders in Colombia has sparked outrage across the country, as the right-wing government of President Ivan Duque faces increasing challenges to his already weakened leadership. 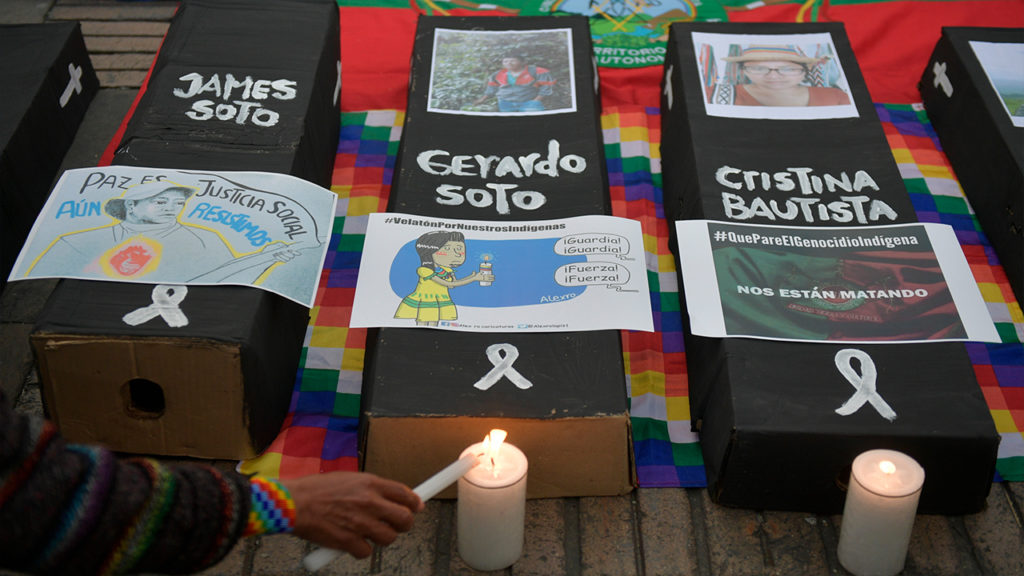 The violence against indigenous people and against activists in Columbia is not letting up. Last week, an indigenous governor in the Northern Cauca region of Columbia, Christina Bautista, was murdered along with four volunteer community security guards. Inhabitants are calling the incident a massacre, and over 1000 held a funeral service for them over the weekend. It is not clear who was responsible for the attack, but government officials and others are saying that dissidents of the Revolutionary Armed Forces of Colombia carried it out.

Earlier this week, another indigenous community member was killed, and two more were wounded in the same region. According to the UN, there have been 52 murders of indigenous people in the Northern part of Coca this year alone, and the National Indigenous Organization of Columbia has documented 120 such murders in all of Columbia for this year so far. Colombia’s countryside has long been considered very dangerous for activists and indigenous leaders, but recently there has been a surge in violence it seems. Why?

Joining me from Ecuador to discuss this issue is Manuel Rozental. He’s a Colombian activist and practicing surgeon who is normally based in Cauca, Colombia. He has more than 40 years involvement in grassroots political organizing with youth, indigenous peoples, urban, and rural movements. Thanks for joining us again, Manuel.

MANUEL ROZENTAL: Well, Christina Bautista and four indigenous guards were murdered in cold blood. My partner, close friend, Bill Almendra, was in touch with Christina the night before this happened. Directly, she was calling for help because a truck had run over a position of the indigenous guard in Cauca. They have no weapon. And they pass through it in a truck and shot automatic weapons fire against them. Fortunately, nobody was wounded then, but she called for help. So did we. We called everybody locally and everywhere we could, including media in Columbia, for support. This is 10:30 to 11:00 the night before the massacre was committed.

Nothing was done that evening. And the following day at 4:30 in the afternoon, they went to a place where they were called to see that some people had been kidnapped. There were reports of a kidnapping, and they went to see this.What was actually in place was an ambush where three trucks shot at them and murdered them mercilessly and leaving six others wounded. Now, this is the most horrendous episode of a series of episodes that have been taking place. Indigenous guards in Cauca have been murdered systematically, one every three days for the last two to three months. And then four other people were murdered the next day, and two other indigenous guards. A total of 17 people were murdered in Northern Cauca last week. Who did this? The global answer is drug traffic. But what is behind drug trafficking? And that’s the big question.

GREG WILPERT: We actually had you on last May to talk about the rising violence in Colombia. And in that interview, you identified the government’s lack of compliance with the peace agreement with the FARC, as being one of the main reasons for this surge in violence. So, for those of our viewers who haven’t seen that previous interview, give us a brief idea as to how the violence that is happening now is connected to the failure to implement the peace agreement.

MANUEL ROZENTAL: Absolutely. Yes. First and foremost, one can see that close to 800 social leaders, indigenous and social leaders throughout Columbia have been murdered since November 2016 when the peace agreement was signed, and they were murdered throughout the country everywhere. Now, the worst or the most affected territory is Northern Cauca. As we said before, nobody has the capacity to target social leaders, defenders of territories throughout Columbia simultaneously and with such precision. Nobody but army intelligence and the Colombian government. So, this violence is behind this process.

At the same time, not keeping the peace agreement with FARC has led FARC to divide itself into pieces. One group is in Bogota, and he has remained the political party. Another group never let down their weapons, and remains in arms, and is becoming stronger. And the third group recently with the head negotiator, Evan Marques and Santrich, two of the negotiators just recently announced that they were taking weapons again. So there’s more everywhere in Colombia.

But let us put this into perspective. It is very clear that the Colombian government, the Colombian state, transnational corporations, and big capital in Columbia want this war because it is a strategy to access resources and territories. In fact, drug trafficking is the greatest pretext to militarize territories that are resource rich and to dispossess people. The heart of resistance, civilian armed resistance in Colombia, is precisely Northern Cauca. Now, the pretext of drug trafficking is allowing a war to be launched against the people in that territory, and that pretext is drug trafficking.

GREG WILPERT: Now, the Government of President Ivan Duque has said that it wants to address the violence by sending military into the region. What is the response from the people there, and to the idea of increasing military presence in the area?

These projects divided indigenous communities into two groups. One group that rejects these kinds of activities, recognizing the fact that these will lead to militarization and war, which is what President Duque is doing now. And the other group that is making profit in complicity with this process, and there’s a division between those Nasa indigenous peoples who are complicit or negligent about this issue and those who rejected it, and this explains the assassination of indigenous people.

Now, what Duque does, President Duque does is escalate an ongoing war that we will dispossess indigenous people after dividing them. The army has done nothing in the last 11 years to stop this problem. Nothing at all because there is a complicity in place.

GREG WILPERT: Now, I want to turn to the national implications of what is happening in Cauca, that is on Wednesday, Columbia’s Minister of Defense resigned in the face of a no confidence vote, and his resignation seems to have been actually motivated by other incidents. But it speaks to the general weakness of the government of president Ivan Duque, whose popularity now is around 30% according to recent polls. Also, there were recent local elections in Columbia in which progressives won important victories.

And meanwhile, indigenous groups, university students and peace activists are calling for a national strike to take place on November 21st. So, how does all of this fit together, and does it suggest that Ivan Duque’s presidency is in trouble?

MANUEL ROZENTAL: We hope it is. I am saying this sincerely, and the reason for it is what is happening in Northern Cauca is happening throughout the country. They tore apart the peace agreement, they provided justification to, to launch a war against, and the armed insurgency is up in arms again. They promoted drug trafficking and cartels throughout the country, and there’s every reason, and there’s all kinds of evidence to prove that the government is involved with this, and all these at the same time with was all kinds of political and economic reforms, favoring IMF, et cetera, to dispossess people.

So what is happening now is the general uprisings against President Duque because his fascist policies and wars throughout the country are a disaster. The minister of defense has been directly involved in an assassination of demobilized FARC militants. But also on the 30th of August this year, he ordered the assassination of seven children in Caqueta, and covered it up as an attack against FARC dissidents. So, that, Cauca, and the war throughout the country led to his resignation.

GREG WILPERT: Okay. Well, we’re going to leave it there for now, and of course, as usual, we continue to follow the situation there. I was speaking to Manuel Rozental, Colombian activist and practicing surgeon based normally in Cauca, Colombia. Thanks again, Manuel, for having joined us today.

MANUEL ROZENTAL: Thank you, Greg, for your interest.

SPEAKER: Thanks a lot for watching. Appreciate it. But do us one more solid favor–hit subscribe button below. You know you want to. Stay up on the videos.

Emmanuel Rozental is a Colombian activist, physician, and practicing surgeon with more than 40 years’ involvement in grassroots political organizing with youth, indigenous peoples, and urban and rural movements. He has been exiled several times to Canada for political activities. Academic in social and political sciences, strategist with social movements throughout the Americas and beyond.