‘Mafioso Capitalism’ and the Suicide of Peru’s President

Prof. Gerardo Renique discusses the three other ex-presidents already in jail over the Odebrecht scandal, and Alan Garcia's death, just as he was about to be arrested for corruption

The funeral for President Alan Garcia of Peru, who died by suicide before his expected arrest on corruption charges, was held on Sunday, April 21. In a note, Garcia claimed he was innocent, and that the charges against him were politically motivated.

The charges were based on Garcia's  possible connection to the Odebrecht corruption scandal, where the Brazilian construction company has previously admitted to spending over $800 million in bribes to Latin American politicians. Three of Peru's former presidents are also in pre-trial detention facing charges related to the same scandal: Alejandro Toledo, Ollanta Humala, and Pedro Pablo Kuczynski.

"It's not unique to Peru. I feel that, you know, behind—if we try to dig into the network of power and the network of relationships established by Odebrecht and other governments, I would say there is a characteristic of the type of this mafioso capitalism that have taken control of large parts of not only Latin America,” said Renique. “Actually, there are scandals related to Odebrecht from Argentina to Brazil, from Ecuador to Guatemala, Mozambique, Angola, and even in certain municipalities and regional governments in Spain."

Wilpert asked about the implications of the other former right-wing and neoliberal ex-presidents being detained in connection this scandal, and whether it opened a door for Peru's left wing to make gains politically. Renique explained that right-wing media in Peru is describing Garcia's death as a result of overzealous prosecutors and journalists, but "there is a strong social movement and strong public opinion that is starting to counteract that."

Renique said that while the left had relatively good results in the last election, it was currently—like much of the Latin American left—split.

"The possibility for a resurgence of the left [is] going to be there," Renique said. 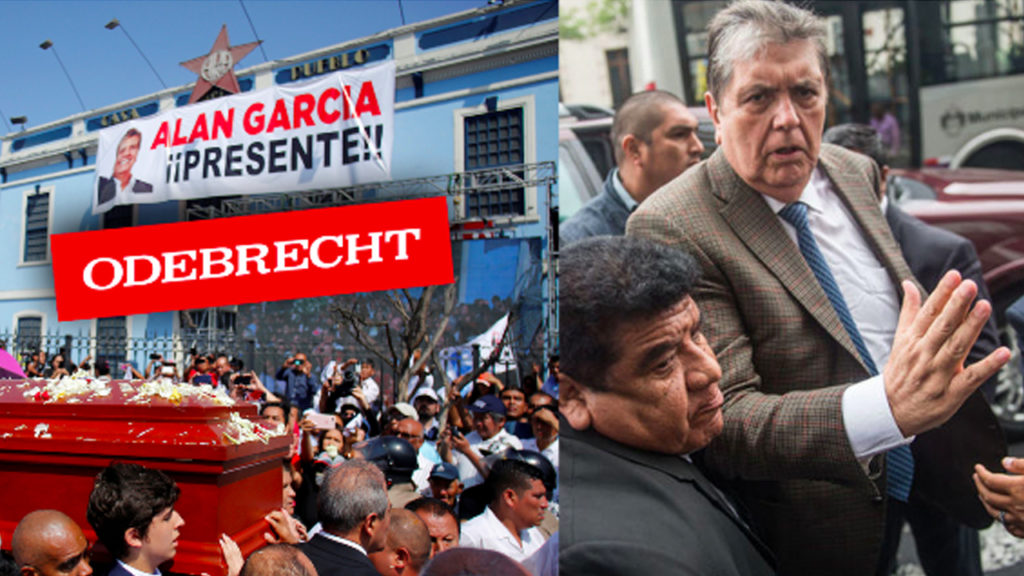 GREG WILPERT It’s The Real News Network and I’m Greg Wilpert in Baltimore. Peruvians held a funeral for former President Alan Garcia on Sunday, who had committed suicide last week just as the Peruvian police were about to arrest him on corruption charges. Garcia was president of Peru twice from 1985 to 1990, and then again from 2006 to 2011. Last year, Garcia began to be caught up in Peru’s growing corruption scandal involving the Brazilian construction company Odebrecht, which has admitted to having spent $800 million in bribes to politicians across Latin America. Three other ex-presidents of Peru are already in pre-trial detention— Alejandro Toledo, Ollanta Humala, and Pedro Pablo Kuczynski. All of them are also facing charges of having to do with the Odebrecht Corruption Scandal. Joining me now to discuss the state of corruption in Peru’s politics is Gerardo Renique. Gerardo is Professor of History at the City College of the City University of New York and is a member of the editorial board of NACLA. He is also the co-author with Deborah Poole of the book Peru: Time of Fear. Thanks for joining us again, Gerardo.

GREG WILPERT So let’s start with Alan Garcia. What exactly was he accused of and how serious do you think are the allegations against him?

GERARDO RENIQUE He was accused of taking bribes on the project of, the construction of the metropolitan railway system during his first administration. Alan Garcia—he’s been evading justice. For the last year he was sort of a, as he proved sometimes, they would call him “the Teflon president”— nothing could stick. So finally, he was caught; he was cornered. Actually tomorrow, a Peruvian prosecutor is interrogating Jorge Barata. Jorge Barata was a top executive, a representative of Odebrecht in Peru. Part of his plea agreement is that he was going to disclose and give all the details of the network of corruption set up by the company, Odebrecht in Peru, functionally with the administration of Alan Garcia.

GREG WILPERT So now in Garcia’s suicide note, which his daughter read out loud at the funeral, Garcia says basically that he’s innocent and that the charges against him are politically motivated. At the same time though, as I mentioned, all recent presidents of Peru plus opposition leader Keiko Fujimori, are currently in prison. What is going on here? Is this a sign of just how corrupt politics is in Peru? And is the justice system blazing an exemplary role here? What do you think?

GERARDO RENIQUE What is happening here, first of all, the case is not unique to Peru. I think that behind, if we try to dig into the network of power and the network of relationships established by Odebrecht and other governments, I would say there is a characteristic of this type of mafioso capitalism that has taken control of large parts of not only Latin America, but other parts of the world. Odebrecht— actually there are scandals related to Odebrecht from Argentina to Brazil, from Ecuador to Guatemala, Mozambique, Angola, and even in certain municipalities and regional governments in Spain. So what happened here is that together with the corruption cases, Alan Garcia established a very tight network of people, journalists, TV stations, radio stations, as well as within the judiciary. So for many years that network have protected him. On one hand, you have the judiciary that make impossible to prosecute Alan Garcia. And on the other one, the traditional media that he would use certain people very well-positioned in this media to amplify his rebuttals of the accusations. Alan Garcia was an extremely skillful person and a very wise politician. So all this time he was able to do that, but what has happened, what has created the opening as you just mentioned— one, it explicates that we have a new class, a new group of young, brave, very professional prosecutors and judges. That’s one. The other important factor is the existence of a very strong social movement, a very strong social movement in defense of historical memory, as they describe themselves. These are two components. All the human rights organizations, all the different associations of relatives and people that were tortured, disappeared during the thick of the counterinsurgency war against Shining Path. And on the other hand, a very strong movement that erupted in Peru during the 2016 election. In the 2016 election, when Alan Garcia got 60 percent of the vote, the favorite candidate was Keiko Fujimori. So the election brought a large coalition of people, a movement that was made up of human rights organizations. They were in particular young people, rejecting the candidacy of Keiko Fujimori. So it is under those conditions and a last element— the existence of very strong social media and a certain number of investigative reporters that are the ones that have disclosed these elements. Now this is not only something happened in Peru. What also favored or galvanized this movement against corruption was the disclosures of Wikileaks. In WikiLeaks, they disclosed all the under-the-table negotiations of Peru and the U.S. for the Trans-Pacific Pact. And on the other hand, the Panama Papers. The Panama Papers disclosed information about all the former presidents— Toledo, Kuczynski, and in particular, Alan Garcia. So all that created the perfect storm. The qualities of all these different trends: the judiciary, social movements, the existence of investigative reporters, and social media. When Alan Garcia was controlling sectors of the of the traditional media, he really couldn’t catch up with the social media that was amplifying and spreading all the information that was coming out of WikiLeaks, the Panama Papers, and research carried on by all these independent journalists in Peru.

GREG WILPERT Hmm, this is very interesting. Now do these scandals, which have basically involved neo-liberals such as Toledo and Kuczynski, but I’ve also involved right-wingers such as the Fujimoris, do these scandals give an opening for Peru’s left to take over the government in the next elections?

GERARDO RENIQUE I mean, obviously, this situation has turned in the last days after the death of former President Garcia. There’s a strong reaction from a certain part of the right from the media they control to vindicate the image of Garcia as a sacrificial lamb of these overzealous prosecutors and this media campaign of journalists that have dark goals. So they’re trying to obstaclize, to put obstacle to all the investigations. But on the other hand, there is a strong social movement and strong public opinion that is trying to counteract that. Now the problem is that the left in Peru, as is the case in many cases in Latin America, after the left in the last elections got very good results, was a third political force almost immediately after that, and this seems to be a disease of the Peruvian left and the Latin American left in general— the left at the moment is split in two fronts. So yes, the possibilities for a resurgence of the left are going to be there. But tomorrow, one of the Peruvian prosecutors is going to start obtaining declarations from Jorge Barata. Part of his plea deal with the Brazilian justice and with the Peruvian justice is that he has to disclose all the— he has to tell the truth. It’s the deal that they worked out with, in the case of Trump here, with a coin. So we’re going to see what new proof or what new evidence is going to come out of this process. On the other hand, you mentioned the case of former presidents and Garcia himself. There’s a number of people in the judiciary, former functions of the state, members of Alan Garcia’s party, that are at the moment either in detention or they have corruption cases pending against them. So there’s going to be plenty of material for this battle to keep going. This is going to be a long process, I think, it’s going to be a long process. But again, I’m hopeful this is going to create a new moment that I hope the left will be able to capitalize.

GREG WILPERT Okay. Well we’re going to continue to follow it as it develops. But we’re going to have to leave it there. I was speaking to Gerardo Renique, Professor of History at the City College of the City University of New York. Thanks again, Gerardo, for having joined us today.

GERARDO RENIQUE Thanks to you, Greg, Have a good day.

Gerardo Renique teaches history at the City College of the City University of New York and is member of the editorial board of NACLA. He is the author (with Deborah Poole) of PERU TIME OF FEAR — Forthcoming second edition July this year.