The L.A. teacher strike entered its third day as contract negotiations  broke down between district officials and union leadership

The L.A. teacher strike entered its third day as contract negotiations  broke down between district officials and union leadership 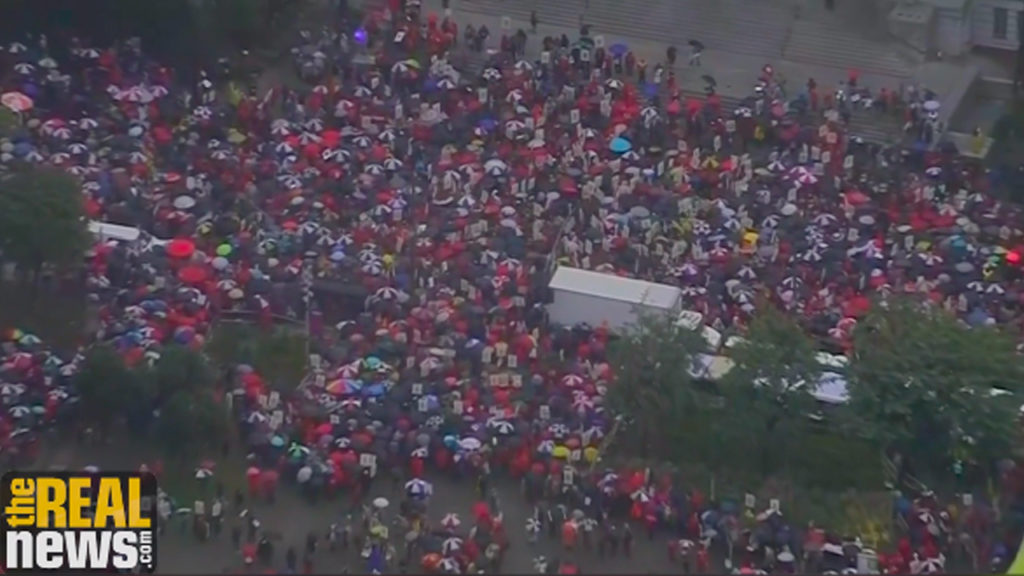 JAISAL NOOR: The Los Angeles teachers strike is continuing with no end in sight, as over 35,000 teachers and support staff hit the picket lines for a third day on Wednesday. No contract negotiations are scheduled between the district and union officials. Teachers are demanding better pay, smaller class size, and more support services.

ANDREW MONTOYA: Oh, we can have 40 kids, upwards to, like 48 in some of my classes. I mean, that’s a hard learning environment for anyone and for a teacher to organize, you know.

JAISAL NOOR: The LA school district is comprised of a majority of low-income students of color. Los Angeles teachers get paid less and have more students in their classroom than their counterparts, all things educators have been demanding since their previous strike in 1989.

DELIA MELENDEZ BATALLA: My name is Delia Batalla, and I’m a teacher of 33 years in [Remington] at George De La Torre Elementary. I went on strike in 1989. I was a third-year teacher. And back then we were striking for salaries and also for seniority rights, and we had no, we had no voice in the classroom, in the schools. So we fought for our councils, for our school leadership council and for our school site council. Now we have those. So 30 years later, we still have too many students in the classroom. Our salaries are not on par with salaries across the nation.

CLAUDIA ORTEGA: People understand the sacrifices that the teachers deal with on a daily basis, and resources that are very limited. And it’s very important to have a small class so that we can educate and give the individual needs to each student.

JAISAL NOOR: But the strike is about more than just compensation.

ALEX CAPUTO-PEARL: Public education is not your plaything, billionaires. It belongs to the people of Los Angeles.

JAISAL NOOR: The strike is also challenging the expansion of charter schools that are publicly funded but often privately managed charter schools have been embraced by wealthy philanthropists like Bill Gates and Eli Broad. Democrats like the likes of Arne Duncan and Republicans like billionaire education secretary Betsy divorce the head of the school district is pro charter and has a background in business not as an educator. Charter school supporters say they are able to innovate in ways traditional schools cannot.

But critics like author and scholar Noliwe Rooks notes the wealthy would never accept such reforms for their children.

NOLIWE ROOKS: What every high-performing traditional public school experience would show you is if you educate kids the same way that we educate the wealthy, if we organize our classrooms in the same ways that we organize the classrooms of the wealthy, if we take an approach to curriculum that’s not about one size fits all but is about figuring out how to bring out the best, those kids will do just fine. But often what happens with poor people, it’s like, well, we need more regulation. We need more–we need fit them into a smaller and smaller hole. They need to, they need to be tested more. We need to ride the teachers harder.

Since 2014 the teachers union has been led by longtime educator and activist Alex Caputo-Pearl. Under his leadership the union has embraced a more militant unionism, more similar to the Chicago teachers, who held their own historic strike in 2012.

ALEX CAPUTO-PEARL: California should be reading, not languishing. This affects our students in Los Angeles. Am I right?

So here we are on a rainy day in the richest country in the world, in the richest state in the country, in a state as blue as it can be, and in a city rife with millionaires, where teachers have to go on strike to get the basics for our students.

JAISAL NOOR: Stay tuned to TheRealNews.com for more coverage of the LA teacher strike. This is Jaisal Noor.