Simone Chun discusses the substance of Chairman Kim Jong Un’s speech, analyzing his vision for relations with North and South Korea as well as the United States

Simone Chun discusses the substance of Chairman Kim Jong Un’s speech, analyzing his vision for relations with North and South Korea as well as the United States 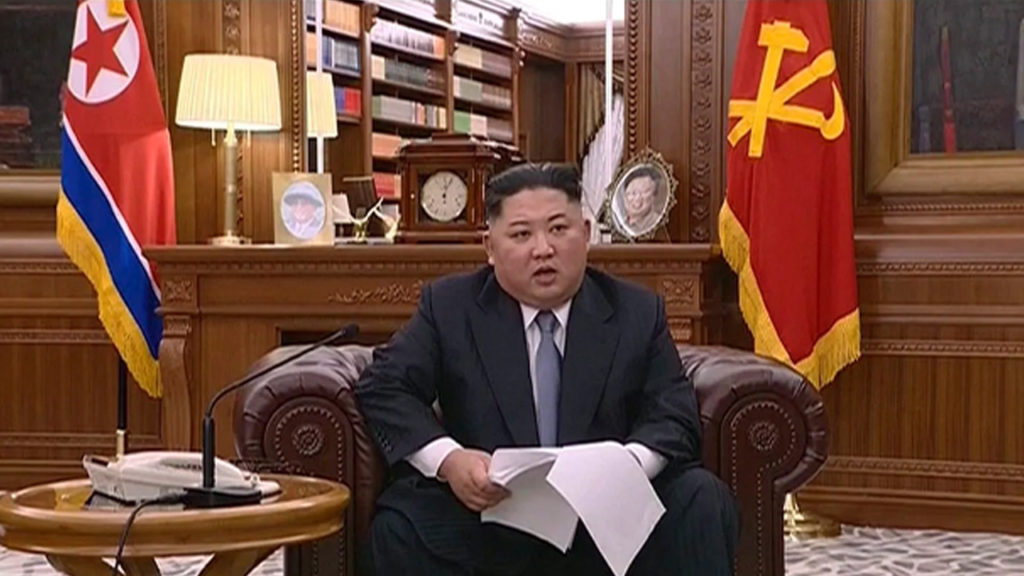 MARC STEINER: Welcome to The Real News Network. I’m Marc Steiner, great to have you with us.

Kim Jong Un’s New Year’s Eve speech to his nation was also aimed at South Korea, which broadcast the speech live, as well as the United States and the rest of the world. He seemed clear that he would not unilaterally disarm his nuclear capability unless the U.S. did something similar. And he thought, attempting to drive a deeper wedge between South Korea and the U.S. at a time when Trump wants South Korea to foot more of the bill for U.S. troops in that country, that the Koreas should be determining their own fate without foreign interference, not the rest of the world. He emphasized economic growth for North Korea, not nuclearization.

In a pitched battle to gain support, he also aimed this, I think in many ways, to China, Russia and other nations, as well as to the U.S. and to the world. As this was going on, the highest ranking North Korean to defect while Kim was ruler did so in Italy and Trump’s National Security Adviser kept thumping threats and ultimatums to North Korea during all this. So are Kim and Trump, as the New York Times said, North Korea and the U.S. back to square one? What does that mean, despite Trump’s Tweet? And what does it mean that the American media and corporate media are saying that we’re getting it wrong, we’re not really understanding? And what is the future of the two Koreas?

We’re about to have a conversation with Simone Chun, who has taught at Northeastern University in Boston and served as an Associate in Research at Harvard University’s Korea Institute, is an active member of the Korea Peace Network and on the steering committee of the Alliance of Scholars Concerned about Korea. And Simone, welcome. Good to have you with us here on The Real News.

SIMONE CHUN: Thanks for having me. Happy New Year’s.

MARC STEINER: Happy New Year to you too, happy New Year to you too. So let’s talk. Let me start here in United States about what the corporate media is doing. Let me play this short clip. This is a short clip from David Ignatius, who is a columnist for The Washington Post, who was on television talking about what he saw as happening between Korea and the U.S. And we’ll pick up from this piece about what the media is missing or getting right here about what’s happening. Here’s the clip.

DAVID IGNATIUS: They’re both looking forward to another summit like the one that took place in Singapore in June. What’s the agenda for that summit? The North Koreans have shown no sign whatsoever that they’re prepared to denuclearize. Does the President know something that the North Koreans are planning to do? If not, I don’t think there’s going to be political support for another big, showy summit that produces nothing.

MARC STEINER: So Simone, take that as just one example of many things that’s been said and written in our media. And what are we hearing here, what do you hear that you think that it’s missing in terms of some of the substance?

SIMONE CHUN: I think that first of all, we should look at briefly, summarize again, recap. Kim Jong Un’s speech. Clearly, it was a very constructive and also positive message, there’s no sort of bellicose threat against the United States. It was a sort of open-ended, again, invitation, looking forward to a second Kim and Trump summit. And also, as you pointed out, the main message was about economy, economic development, modernization of North Korea. And also, very, very strong emphasis actually on the individual welfare of ordinary North Korean citizens, so workers and farmers who are really suffering from these U.S. and UN-led economic sanctions against them.

And what is really missing in the American media is they reject the enormous progress that has been made in 2018, as you recall. And in fact, Chairman Kim Jong Un said that 2000 year was just sort of the first step toward this long process toward denuclearization, which he again reiterated his strong commitment to denuclearization. But one thing that I guess there is a different definition, North Korea, and also for many people, an important thing is the denuclearization of the entire Korean peninsula, not just that the denuclearization of North Korea, which is the way most of the American corporate media and also within the Trump administration think.

And with the American corporate media, even I was in Washington, DC visiting U.S. Senators and members of Congress on the day of the summit. Within 24 hours there were already even Democratic members that were ready to just sort of sabotage, destroy, not giving any credit whatsoever to the progress, or even to effort that is in the making. So I think that we are already seeing, in spite of a very positive message and the progress that was made in 2018, as you mentioned and pointed out, that we already see a very strong sabotage campaign from the corporate media and also from even now looking at the Democratic controlled members of Congress and the more neocon hardliners, which I think is very important to respond.

MARC STEINER: But I mean, there’s a couple of things here. Let’s play before I raise this question, this is the clip, obviously a translation of part of the address, a very short piece, part of the address that chairman Kim gave to the nation, to South Korea, to the world.

KIM JONG UN: Our parties, our governments and my resolve for complete denuclearization remain unchanged. We have proclaimed that we will no longer make nuclear weapons and will not use them or spread them. If the United States continues to break its promises and misjudges our patience by unilaterally demanding certain things, and pushes ahead with sanctions and pressure against our republic, then we have to seek another way to protect our country’s sovereignty and interest and establish peace and stability on the Korean peninsula.

MARC STEINER: So in many ways, this speaks to what you were talking about earlier, this piece of the translation of Kim’s New Year’s address. The question is, I mean, a lot has been made by Trump that there’ve been these great advances, but there are others who would argue, from left and right, in Korea and here, that really we’re as far apart as we ever were in between the two nations in terms of what to do, specifically because of the denuclearization that clearly, Kim in North Korea said they are not going to do as long as the U.S. has the possibility of attacking North Korea. So that seems like he’s making that very clear.

And then also, the big push here, it seemed to me, was he was talking about the Koreas need to resolve their issues. There’s already this tension between South Korea and the U.S. over money and the troops, so where do you think that takes the future? I mean, this has been probably the greatest overture between North and South Korea in decades since the war, maybe. So go ahead, I’m sorry.

SIMONE CHUN: I think, in my personal view, 2018 has been the most peaceful time for Korea on the Korean peninsula. And I know a lot of people would have a problem and don’t like Trump, but in his own way, because for his political interest, I think he’s in a certain way produced these outcomes. And with regard to North and South Korean relations, yes absolutely right. It has been an incredible year. And Kim Jong Un’s speech, if you look at it, basically the way he interprets the Panmunjon Declaration, is sort of the end of war, keep that non-aggression pact between the two Koreas, so then North and South Korea will never consider each other its enemy. That’s the way he understood it.

And as you recall, the most important thing right now is what North Korea wants is they want to build trust with the United States. And as you remember, the number one thing of their summit was a new relationship between the United States. So North Korea wants, most importantly, to end hostility from the United States and precisely end the war declaration, that is, as you recall, the Korean War that has not ended. So it’s almost seven decades of war. And as you recall, according to the armistice agreement of 1953, within 90 days of signing the armistice, there were supposed to have some kind of permanent peace settlement. So after almost 70 years, the Korean war is still going on.

What North Korea wants is some kind of reassurance from the United States that the United States shall not ever attack North Korea. And that means, again, specifically, the end of the war declaration, possibly along three parties, that is South Korea, North Korea and the United States, and then followed by a full party a peace treaty. Full party means that includes China. China, as you remember, was also involved in the Korean War. So that should be also happening simultaneously with the process of denuclearization.

MARC STEINER: That does seem a long way away, it doesn’t seem like we’re on the verge of anything like that at this moment.

SIMONE CHUN: I think a second summit between President Trump and Kim Jong Un will be held either in January or most likely maybe later in February. And in the Korean relationship will be, I think, progress, and I think we’ll see more unity along Korean people and also toward peace and prosperity in the Korean peninsula. And I think at this point what we really have to look at is the American media, and also especially now, the Congress has to support for ending of the Korean War and also working towards the peace and prosperity not only on the Korean peninsula, in all of East Asia.

And most importantly, finally, the United States really must lift the sanctions against the 22 million North Koreans who are suffering from these brutal sanctions. And so, to summarize, I think that there will be a summit, a second summit, and also the inter-Korean relationship will progress regardless, no matter what happens outside of the Korean peninsula. But that is my prediction, and I hope that we can support the Koreans’ yearning for peace and prosperity.

MARC STEINER: Well, Simone Chun, thank you so much for joining us. I appreciate your taking the time today, we’re all looking forward to seeing what happens next and watch this very closely. Happy New Year to you.

MARC STEINER: And I’m Marc Steiner here for The Real News Network. Thanks for being with us. Take care.

Dr. Simone Chun has taught at Northeastern University in Boston, and served as an associate in research at Harvard University’s Korea Institute. She is an active member of the Korea Peace Network, and a member of the steering committee of the Alliance of Scholars Concerned about Korea.