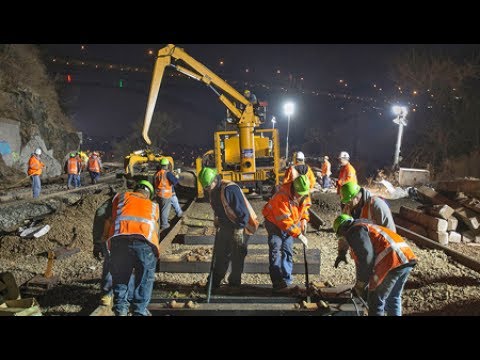 Jaisal Noor: We’re here to commemorate the 140th Anniversary of the Great Railroad Strike of 1877, which not a lot of people know of today.

Jaisal Noor: But it was the first national strike. It involved at least 100,000 workers, almost half the army had to be called in to put it down.

Jaisal Noor: Across the country. More than 100 people were killed. Thousands were injured and the workers were fighting against an additional 10% pay cut.

Jaisal Noor: That the railroad owners were instituting on the workers even though they were getting some record profits. That happened 140 years ago. Fast forward to today, do workers in the railroads are they facing similar conditions? Do they have somewhere grievances to what existed almost a century and a half ago?

I work in the Washington DC office, and time and again something will come up to undermine the safety of rail workers or issues regarding funding for Amtrak and things of that nature so we keep working on that. We are in national negotiations and, of course, the railroads are demanding things to, changes in our working conditions of what not that would make our jobs less secure and make us pay far more for our health insurance and things of that nature, but that really pares in comparison to what happened in 1877. When there were actually implemented wage cuts without any negotiations ’cause the unions weren’t able to negotiate it. It was against the law at the time to negotiate as a labor union, but we’ve come a long way.

We’re actually in position today where we’re more protecting what we have and try and make some modest gains as we proceed forward, but not like what happened by our predecessors.

Jaisal Noor: One of the things that’s sort of forgotten or written out of the history books today is the gains that were made for workers in America through strikes such as The 1877 Strike. Talk about how that benefited, how those struggles ended up creating gains for workers and the protections, like the 5-day work week, 40-hour work week.

Jaisal Noor: Vacations, weekends. Talk a little bit about what gains were implemented through struggle that are often forgotten about today.

John Risch: Each and every gain that working Americans have made over the last century and a half was led by organized labor. There’s the old saying, “Unions: The people that brought you the weekend,” and organized labor through collective bargaining agreements, through pursuing changes in law both at state and federal level, are the ones that brought improvements and working conditions to America’s workers. Whether it be the minimum wage, OSHA and Safety Regulations and railroad workers part. It’s the Federal Railroad Administration Regulations. We work on those issues all the time to make the workplaces safer. Then through collective bargaining, we try–our attempts are to improve the wages and conditions of work, but beyond that, we fully support things like raising the minimum wage, living wages, things of that nature that are good for all Americans.

Jaisal Noor: How has that impacted workers on the … working the railroads today?

John Risch: It’s had a tremendous impact. Back in 1920’s, 15% of the American Workforce, more than two million Americans when we only had a far fewer people living in this country, worked in the railroad industry. Technology is changing dramatically. I hired out on a railroad in North Dakota and when I hired out, we had in 1978, we had five people on a train. We went 100 miles. When I went, left to go to DC in 2009, we had two people on a train and we went 200 miles and instead of getting our instructions on where to take sightings and what not with our trains by people along the right-a-way, it was all by signals and microwave messages to our locomotive cab.

The industry has shrunk tremendously as far as employment goes, but at the same time, we’re hauling more freight than we ever did. The good news is that on the freight side, America’s freight railroads are the finest freight railroad system in the world. Our tracks and the conditions of the infrastructure is better shape than it’s ever been in so that’s good news. I’m pretty positive about the future for rail; more energy efficient, better for the environment, reduces highway congestion. We work on things in Washington DC and the various states to try and promote rail trip.

Jaisal Noor: National unions have been in decline for some time as far as membership goes.

Jaisal Noor: And now we have an administration that is openly anti-union in Washington DC. If they had their way, there would be no more unions, if you want to be honest about it.

Jaisal Noor: What are you seeing as far as legislation in DC right now that’s affecting workers around the country?

John Risch: Well, already the Education and Workforce Committee in the House have passed a number of bills out of committee that would make it far more difficult for workers to organize. There’s always the threat of National Right to Work. I’m not sure about President Trump himself being viciously anti-labor, but certainly he’s appointed some people that would cause us a great deal of concern.

National Right to Work is an issue that were concerned about because it’s very goal is to undermine and weaken trade unions across America. It’s the only reason for it. The only people that are supporting it are big corporate interests that want to destroy the labor movement, so there’s been bills introduced in both the House and the Senate. Sean Spicer, the President’s Press Secretary, at a press conference said that the president does support National Right to Work. We’re concerned about it. We’re working on it. We’ve done outreach to our membership. I continue to work with Congressmen on the Hill, especially pro-labor Republicans, and there’s some, to make sure that doesn’t take place.

Jaisal Noor: Finally, as we’re commemorating the 140th Anniversary of The Strike of 1877, what do you think is the most important thing for people to remember today about past labor struggles like it?

John Risch: I think what we should remember is don’t take what we have for granted. Oftentimes my own members think that well, you know the railroads would provide us with these wages and fringe benefits and working conditions without the union being there, and they’re not really fully knowledgeable about what it took to get to where we are today, when you still need to make improvements. We have terrible problems with fatigue in the industry and we’ll work on that, but we’re where we’re at today because there was a lot of struggles that happened between 1877 and 2017 and they’ll be more in the future.

The Lines Between Us: The Modern History of Baltimore Apartheid (1/2)

Where Do the Politics of Reparations Go From Here?

The History of American Resistance