Psychologists James Mitchell and Bruce Jessen, the architects of the CIA's torture program, have reached a historic settlement in the case of three victims. John Kiriakou, the former CIA analyst who went to prison for exposing the torture program, says the duo settled to avoid accountability. (photo: ACLU)

Psychologists James Mitchell and Bruce Jessen, the architects of the CIA's torture program, have reached a historic settlement in the case of three victims. John Kiriakou, the former CIA analyst who went to prison for exposing the torture program, says the duo settled to avoid accountability. (photo: ACLU) 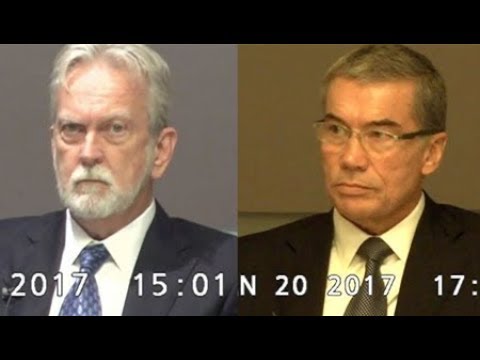 AARON MATE: It’s the real news. I’m Aaron Mate. In a landmark case, the architects of the CIA’s torture program have reached a settlement with its victims. The psychologists James Mitchell and Bruce Jessen have agreed to undisclosed terms with two victims and the families of a third. It’s the first time top officials in the CIA torture program are being held at least somewhat to account. Joining me is someone who has helped make this happen. John Kiriakou is a former CIA analyst who exposed the torture program and is the only official jailed in connection with it. John, welcome.

JOHN KIRIAKOU: Thanks for having me.

AARON MATE: I should say you were the only official who was jailed with it, because you’re out of jail now. We’re very happy to speak to you because you have a real connection with this case. Your response to this settlement?

JOHN KIRIAKOU: I know the ACLU is very happy. I know that one of the victims said he was very happy and that he felt that justice was served, but I actually am disappointed in this settlement for a number of reasons. First of all, the decision is sealed, so we really don’t know if justice has been served. We don’t know what the terms of the agreement are. We don’t know if there is any kind of deterrent that has been written into the decision. The fact that it’s not public, it seems to me at least in part defeats the purpose. Second, Mitchell and Jessen, the two CIA contractor psychologists who were the defendants in this case, were indemnified by the CIA in 2001. Even though they were sued, the CIA paid for their attorneys. The CIA is paying for their settlement. The CIA is paying for everything.

When I say the CIA is paying for it, I mean that you and I are paying for it. The American taxpayers are paying for it, so there’s no actual hurt to Mitchell and Jessen. And third, this trial, had it gone to trial, would have exposed CIA documents related to the torture program that we otherwise will never have access to. We’re going to lose that now. Whatever didn’t come out with the Senate torture report and could have come out with this case will not come out. We’ll just never know what the truth is behind this case.

AARON MATE: You know, a few things. Let me start with who Mitchell and Jessen are. We talk about US taxpayers paying their legal fees. Well it wasn’t just that, right? Because before that, to design this program, Mitchell and Jessen received millions of dollars to create the program. Can you talk about what they did and the techniques that they came up with that these victims were subjected to?

JOHN KIRIAKOU: Yeah. Mitchell and Jessen were psychologists in the department of the Air Force. They reverse engineered the Air Force’s SERE training program to use offensively against terrorism suspects. This became the torture program. This became the 10 techniques that were used that the Bush White House euphemistically called Enhanced Interrogation Techniques. Now, in addition to being paid the standard $1050 a day that almost every CIA contractor is paid, Mitchell and Jessen over the course of several years were paid an additional $81 million to come up with this program and to then implement it. Now, what makes it even worse than just coming up with the program is that they went overseas to the secret prisons, and they were the ones who actually carried out the torture. There will be no punishment for them for doing that.

AARON MATE: Right. Let’s talk about these victims. Suleiman Salim, Mohamed Ahmed Ben Soud, and the family of Gul Rahman. Rahman is now deceased. Let’s talk about what they went through. I know that at least a few of them, Salim, and Ben Soud, I’m not familiar with Rahman’s case. They were held for years, and ultimately ruled to pose no threat at all, as has been the case with so many of these victims of U.S. ambition and torture and imprisonment.

JOHN KIRIAKOU: That’s right. The two surviving victims of the CIA’s torture program were tortured mercilessly and then released because they had nothing to do with terrorism. They were scooped up in the so called fog of war. They were sent to Guantanamo. Before that, they were sent to secret prisons and they were tortured. It turns out they were the wrong guys. Gul Rahman is a particularly sad case. Gul Rahman was subjected to a torture technique called the Cold Cell in which he was chained to an eye bolt in the ceiling like this. He was stripped naked. His cell was chilled to 50 degrees Fahrenheit and then every hour a CIA officer would enter the cell and throw a bucket of ice water on him. Gul Rahman was killed with that technique. He didn’t make it through the night and died of hypothermia. No one’s ever been brought to justice for murdering Gul Rahman. Certainly the justice department never gave CIA officers permission to murder detainees during the course of their interrogations. Well, Gul Rahman’s torture and death were overseen by Mitchell and Jessen. Again, there’s no justice for Gul Rahman.

AARON MATE: Right. Certainly Mitchell and Jessen had a real reason to not want this case to go to trial. Let me ask you though, just to follow up on something you said before. In terms of documents that would have come out in a court case, not being able to now, is there not a second lawsuit that the ACLU also filed against Mitchell and Jessen, and if that’s still ongoing, could that not possibly shed the light that has been foreclosed here?

JOHN KIRIAKOU: Yeah. There’s a second case pending, filed by the ACLU, on behalf of, I believe, Abu Zubayda. Now, Abu Zubayda is far more controversial, because he was sort of Mitchell and Jessen’s guinea pig for this whole program. I’m sort of tied to Abu Zubayda for life. I was responsible for his capture when the CIA believed that Abu Zubayda was the number three in Al Qaeda. He was never the number three in Al Qaeda, and in fact he never even joined Al Qaeda. But the intelligence was faulty.

Well, he was tortured mercilessly and he was the first one to undergo this torture. He has never faced any kind of justice. He has never met his accusers in a court of law. He’s never faced a jury of his peers, and he’s never even been charged with a crime. Not only was he tortured, but he’s been held indefinitely and has literally no hope of release. I hope that his case will eventually bring some of these atrocities to light rather. Now the problem with Abu Zubayda is because he’s so controversial, and because he was the focus of the Senate torture report, I think the chances are very good that the CIA will invoke a national security defense, and ask the judge to dismiss this case with prejudice before any testimony is heard.

AARON MATE: John, just to flesh out your connection with him that you mentioned. If I recall right, you put him on the plane that took him to where he was held and tortured, right?

JOHN KIRIAKOU: Yeah. That’s right. I literally picked him up, along with three FBI agents. He was on a gurney. We lifted him up and maneuvered him into a secret CIA jet. Strapped him to the luggage rack at the back. He asked me to hold his hand. He was crying. He was very upset. I told him a number of times, “I’m the nicest guy you’re going to encounter in this experience. If I can give you any advice, it’s that you have to cooperate.” He said “You seem like a nice man, but you’re the enemy. I’ll never cooperate.” I wished him luck, and I never saw him again.

AARON MATE: Finally John, I know you mentioned that you’re disappointed in this settlement because it means that these two are not going to be held accountable in court, but I’m wondering if you, as someone who exposed this program, if you can at least feel any comfort that two of its victims and the family of the third who died as you explained to us, and are going to experience some modicum of justice?

JOHN KIRIAKOU: You know, I would expect that the settlement is many millions of dollars. I don’t think that Salim would have even said that justice had been served without a provision of millions of dollars, so that in and of itself is a great thing. Another great thing is with this agreement, the CIA has effectively admitted that it had a torture program. Not an enhanced interrogation technique program. Not an interrogation program, but a torture program. At least we have that. I hope that the organization can learn from its past mistakes, its past atrocities and not ever carry anything out like this again.

AARON MATE: Okay. You know what, a quick follow up. Something I meant to ask you. The CIA in some ways did cooperate with the plaintiffs here, right? If that’s a fair characterization, does that signal perhaps that the CIA is distancing itself from Mitchell and Jessen and would be open to some form of future accountability?

AARON MATE: We’ll have to leave it there. John Kiriakou, the CIA analyst who exposed the CIA torture program, went to jail for it. John, thank you.

JOHN KIRIAKOU: Thanks for having me.

AARON MATE: And thank you for joining us on the real news.

John Kiriakou is a former CIA counterterrorism officer, a former senior investigator for the Senate Foreign Relations Committee, and a bestselling author. He was recently released from prison after serving 23 months of a 30 month sentence for exposing the CIA’s illegal torture program.