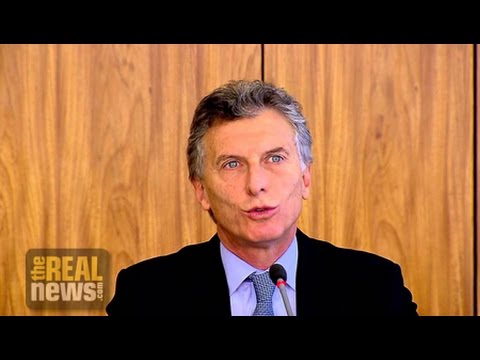 Last December Argentina elected a new Conservative president, effectively putting an end to 15 years of progressive rule by Nestor Kirchner and then his wife, Cristina Kirchner. The new president, Mauricio Macri, first promised only moderate reforms. But in the last two months his program has proved to be far more drastic and neoliberal than most Argentines expected. Since taking office, he has devalued the currency by 40 percent, laid off over 10,000 public sector workers, increased gas prices up to 300 percent, and is promising to pay the so-called vulture funds twice as much money for their bonds as Argentina had agreed to pay other bond holders. According to some estimates, as a result of these policies, poverty in Argentina has suddenly increased by as much as 25 percent.

With us today to talk about the new government and its effort to reverse 15 years of Kirchnerism is James S. Henry, who is joining us from New York City. He is an economist, lawyer, and investigative journalist, and former chief economist at McKinsey & Co. Currently he is a senior fellow at the Columbia University Center for Sustainable Development. Welcome, James, and thanks for joining us.

JAMES HENRY: Good to be here.

WILPERT: So first, let us focus on the Macri government’s recent efforts to reach a deal with the vulture funds. Give our viewers, please, a little bit of background on this. What are these vulture funds, and why are they so controversial in Argentina?

HENRY: Well, Argentina, like many other developing countries, has had consistent problems with managing its foreign debt. And unlike private companies that get into debt problems, governments are not allowed to go bankrupt. So in the last 15 years we’ve seen Argentina sharply reduce its foreign debt, a debt that was largely generated by two periods of excess. First by the military government in the 19–late ’70s and ’80s when it quadrupled Argentine foreign debt. And then by the neoliberal government in the ’90s, under the–that regime. The debt nearly doubled.

So by 2001 Argentina had a debt crisis. It kicked out the IMF and the Kirchner government was elected. And in the last 15 years they have succeeded in sharply reducing Argentine foreign public debt. It’s now less than net of reserves. It’s less than 5 percent of GDP. But the debt vultures are a bunch of hedge funds based in the Cayman Islands and New York City, led by a group of, by Paul Singer, a very noted conservative. They went out in the secondary market, and in 2008-2007 bought up these bonds that had been issued by the neoliberal government in the 1990s for pennies on the dollar.

So when Argentina’s Kirchner government restructured the debt in 2004, they had offered to pay the bond holders about 30 cents on the dollar, between 30 and 40 cents on the dollar. Ninety-three percent of the creditors accepted that deal. But there was still about $9-10 billion outstanding. And that’s the subject of this latest controversy. The new conservative government has gone in and agreed to pay full face value plus interest on bonds that, for example, Paul Singer bought up–he spent $48 million in 2008. He bought up $720 million of Argentine bonds at that point. And now he’s demanding not only the full $720 million but also several hundred million dollars of interest on those bonds.

So this is really an embarrassment to the international community, because it means that, again, these debt vultures are making exorbitant returns based on the fact that countries are not allowed to go bankrupt.

WILPERT: So what would you say are the larger implications of this agreement that the Macri government is getting into? What does it mean for Argentina, and more generally for situations similar to this one? When a government defaults on its debt, and there’s these, these vulture funds who manage to essentially, it seems like, extort or blackmail a government, and eventually a new government becomes a [inaud.] that offers to pay them full value, whereas the others are still left with only 30 cents on the dollar.

HENRY: Well, it really means that sovereign immunity is deluded, that we still don’t have, despite repeated attempts on the part of the IMF and other multilateral institutions an international bankruptcy court for governments. It means that these hedge funds based in the Cayman Islands and unregulated can basically engage in this kind of holdup exercise where they take advantage of the fact that countries can’t go bankrupt and insist on being paid full value for debts that, you know, were widely recognized by, you know, more than 90 percent of the creditors as worthless.

It makes it very difficult to developing countries to, you know, engage in, to basically restructure their economies so they can continue to grow. I might mention also that the original sin here, one of them, was that the military junta in Argentina in 1976-’81 was the government that decided to plant jurisdiction on all Argentine foreign bonds in New York State. So that’s one of the reasons that Singer has been able to recover this exorbitant reward in exchange for relatively little risk.

The new finance minister, you know, he used to work at JP Morgan, he had clients who were among the wealthiest people in Argentina. He’s not going to be enacting the kind of tax reforms that Argentina needs to balance its budget. You know, Argentina, in addition to having reduced foreign debt, the fact is that there’s more than $400 billion of offshore wealth owned by the wealthiest Argentines. And none of that will be taxed. In fact, some say that Argentina’s foreign debt is probably owned in large measure by the wealthiest classes in Argentina, not by foreigners.

So this is an incredible deal for this tiny group of vultures. It’s a deal that serves the interest of the tiny elite in Argentina, but it’s not good for the economy.

WILPERT: That actually leads me to the next question, which was what do you think Argentina could do in response to the vulture funds, and also the U.S. court ruling, which essentially prevented the country from repaying bond holders under the original agreement. What are the options, really, for a government such as Argentina, given the situation?

HENRY: Well, it tried to appeal to the United Nations or the International Criminal Courts. The U.S. government, Obama’s administration rejected the jurisdiction of those courts. It tried to win in the New York courts, but the New York federal court in Manhattan is heavily biased toward the banks that are right next door, and the hedge funds that own this, you know, all this debt that they bought up.

So there’s really not, no recourse. I think we’re still waiting for the IMF and the world community to engage, to develop the kinds of institutions that we need. The international bankruptcy court for governments would be one of them, because governments get into trouble just like private companies, and it’s not really fair for the private sector to be able to do bankruptcy restructuring and not have it extended to especially the developing countries.

WILPERT: Just touching on, in the little bit of time that we have left, on the larger Argentine economy, it seems to be Macri, the new president, seems to be turning very heavily towards neoliberal policies, as I mentioned in the introduction. And he claims that one of the main purposes of his policies is to bring inflation down. But, you know, at what cost? It seems like actually prices for most Argentines have recently gone up with the increase in gas prices and the devaluation, which is why poverty has increased.

What do you see, what do you think of those policies in terms, in the global, the larger context as a turn, again, back to neoliberalism?

HENRY: I think the Kirchner government could have devalued earlier, and should have taken advantage of the healthy growth and exports that it realized to reform the economy. I’m not a big fan of the Kirchner policies. I think this neoliberal government, you know, is probably going to make errors in the opposite direction in terms of it’s already reduced taxes on mining companies. It’s not doing anything to reduce the amount of transfer pricing abuse by its major exporters, the soya companies, grain companies. You know, if you look at the official trade statistics, Argentina sends most of its grains to Uruguay. That’s just kind of a phony bookkeeping entry in order to minimize taxes.

So you know, the case for financing development in Argentina with more debt, and the Argentine–and Macri’s just announced going out in international bond markets to raise another $15 billion. I think that, you know, we’ve had long experience with conservative regimes in Argentina basically pursuing tax cutting and, you know, heavy borrowing abroad. We know where that ends up. So we’d like to see a more progressive tax system in Argentina. And one that doesn’t go back into the debt-dependence that it suffered from.

WILPERT: That’s all the time we have for today, but thank you so much, James, for joining us to talk about this issue.

HENRY: Good to be with you.

WILPERT: Okay. And thank you for joining us at the Real News Network.