Palestinians are claiming victory after Israel was forced to delay the demolition of the village of Khan al-Ahmar, in the occupied West Bank. The International Criminal Court’s chief prosecutor warned Israeli forced displacement of the Bedouin residents would likely be a war crime

Palestinians are claiming victory after Israel was forced to delay the demolition of the village of Khan al-Ahmar, in the occupied West Bank. The International Criminal Court’s chief prosecutor warned Israeli forced displacement of the Bedouin residents would likely be a war crime 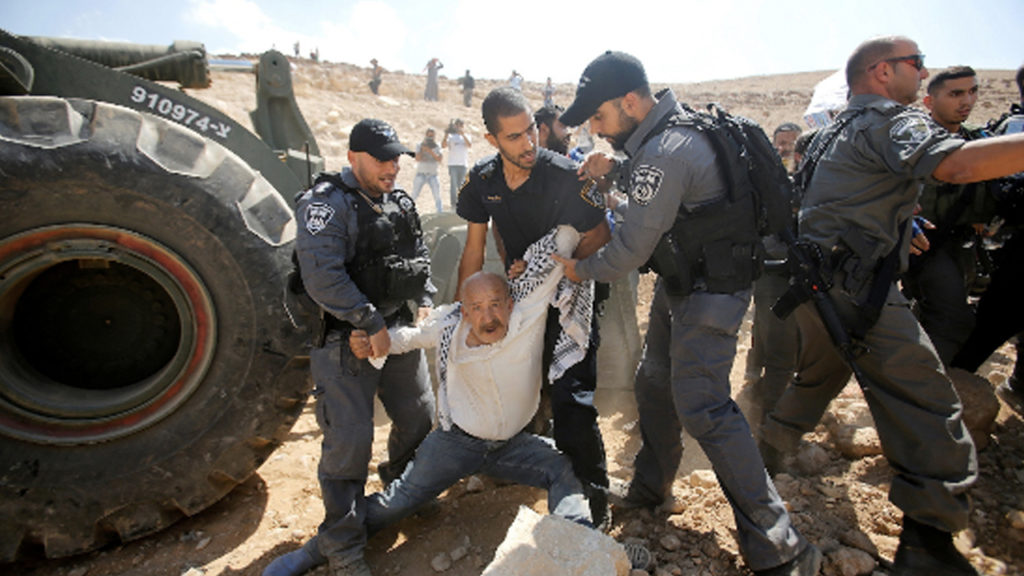 BEN NORTON: The Israeli government has spent months preparing to demolish the Palestinian village of Khan al-Ahmar in the illegally occupied West Bank. This demolition would displace around 200 Palestinian Bedouins, leaving children and their parents homeless. However, at the last minute, when Israel was poised to destroy the village at any moment, the government was forced to temporarily put the demolition on hold. Palestinian resistance and international pressure became too intense and far right Israeli Prime Minister Benjamin Netanyahu released a statement announcing a delay for a short fixed period of time.

This decision came just days after the International Criminal Court’s chief prosecutor, Fatou Bensouda, said that the destruction of the Palestinian village would likely constitute a war crime. Top United Nations officials said the same, stressing that the demolition would be a violation of international law. In September, Israel’s Supreme Court approved the demolition of Khan al-Ahmar. Palestinians responded with a sit-in protest condemning the high court order. Regular demonstrations have continued throughout the ordeal, and Israeli occupation forces have violently repressed these protests.

The Palestinian Bedouin residents of the village were given until October 1 to evacuate their homes. After this deadline was reached, Israeli settlers who illegally live in occupied Palestinian territory, stormed the village and flooded it with wastewater. Yet this repeated violent intimidation from the Israeli government and from extremist settlers has been unable to force the Palestinian villagers off of their land. Palestinian politician Hanan Ashrawi said that the planned demolition is “blatant ethnic cleansing” and part of “Israel’s intent to erase and eradicate the Palestinian presence and continuity on the land.”

Palestinians say this attempted ethnic cleansing is part of Israel’s strategy of isolating Israeli-occupied East Jerusalem from the West Bank. The activist group Jahalin Solidarity interviewed local residents of Khan al-Ahmar, who said Israel is treating them like garbage. When the village was sent a demolition order for its school, a local leader warned it would tear apart the entire community.

Despite the temporary delay, the far right government of Israeli Prime Minister Netanyahu has vowed to soon evacuate the Palestinian village and he insists the demolition will eventually resume. But it is clear that Palestinians’ resistance to this attempted ethnic cleansing will continue and they have the international community and international law on their side.