In a final push to stop the construction of a fracked gas through Maryland, protestors rallied to demand the NPS not issue TransCanada a right-of-way permit

In a final push to stop the construction of a fracked gas through Maryland, protestors rallied to demand the NPS not issue TransCanada a right-of-way permit 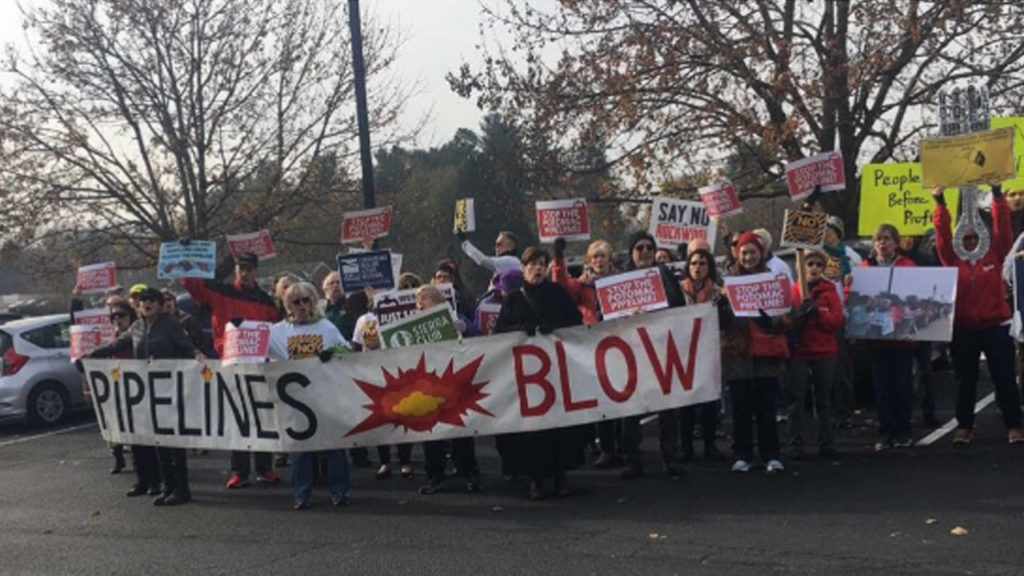 DHARNA NOOR: Earlier this month, a federal judge blocked the construction of energy giant TransCanada’s Keystone XL pipeline. The 1200 mile long pipeline was designed to transport natural gas from Alberta, Canada’s tar sands into the U.S. In Maryland, environmental advocates are protesting another TransCanada pipeline that would move gas from Pennsylvania to West Virginia.

DHARNA NOOR: Armed with a petition signed by nearly 9000 people, dozens of environmental advocates rallied at the National Park Service’s Chesapeake and Ohio Canal headquarters. They demanded that the NPS deny TransCanada a right of way permit and thereby halt the construction of the Eastern Panhandle Expansion Project, also known as the Potomac Pipeline.

BROOKE HARPER: So that’s all of us here in Washington County and in Berkeley County. Nearly 100,000 residents would have their water impacted and contaminated if a blowout were to occur. Scientists around the world have said we have twelve years to drastically change our ways, and now is not the time to be putting more fossil fuel infrastructure in that’ll lock us in for decades of fracked gasses. It also harms our neighbors in Pennsylvania and West Virginia.

BRENT WALLS: … the drilling encountering a void under the Potomac River, which then you would lose millions of gallons of drilling mud into a void that could potentially contaminate the Potomac River for a very long time. And that cannot be mitigated.

SPEAKER: HDD is a trenchless method of installing pipelines underneath waterboards, roads, railways, buildings and other structures. It is an environmentally friendly method used to cross sensitive areas that significantly reduces impact to the land above the drilling site and surrounding communities.

DHARNA NOOR: But critics say it’s dangerous, because it could explode, and because despite safeguards, it will inevitably leak methane, which is a leading contributor to climate change. If it leaks, they say it will also affect a major water source.

BROOKE HARPER: It’s not safe. All pipelines blow, all pipelines eventually leak. And it’s especially going through sensitive Karst geology, which I know it’s been done before, and we’ve seen blowouts, we’ve seen spills, and recently we’ve seen explosions in this type of technology when this type of drilling is done.

BRENT WALLS: Yes, the technology might be very safe in certain circumstances, but with manmade issues and decisions in engineering and pushing the limits, there’s a number of risks that could be had.

TRACY CANNON: Natural gas is also harmful to people’s health. And of course, an explosion, well that could just outright kill people in the course of the accident.

DHARNA NOOR: Under the C&O canal, the pipeline would go through soluble rock, or Karst geology, which the environmentalists say make it more prone to leaks.

BRENT WALLS: Think of it as the Swiss cheese of geology. It allows contaminants, both on the ground and in the ground, to flow very fast and very quickly.

DHARNA NOOR: The Potomac Pipeline would also be the energy source for the controversial Rockwool USA insulation manufacturing plant in Jefferson County, West Virginia, which protesters also say could have devastating health and environmental impact.

TRACY CANNON: Rockwool would be a highly polluting facility that would put formaldehyde, bisphenol, particulate matter, benzene and all manner of other cancer-causing substances into the air. And it’s located – the site they’ve chosen is directly across the street from North Jefferson Elementary School and a residential development with about 300 homes, a working class neighborhood called Fox Glen.

DHARNA NOOR: We reached out to Rockwool for comment, and they said, “There is a crucial distinction between emissions from the chimney stacks and the concentrations of those emissions at ground level. While of course related, it is the latter that determines the health and environmental impact in the area, but the former that project opponents focus on.”

This fight comes just weeks after the re-election of Maryland Governor Larry Hogan, who signed a fracking ban in 2017, but has backed the construction of the Potomac Pipeline, which will ship fracked gas.

TRACY CANNON: Hogan did sign that frack ban, but somehow, he’s not appropriately opposed to the gas industry like he should be.

DHARNA NOOR: The Federal Energy Regulatory Commission and West Virginia Department of Environmental Protection have already approved the construction of the Potomac Pipeline. And in West Virginia, construction has already begun. But the protesters say they’ll continue to fight.

BROOKE HARPER: Here in Maryland, we’re going to take our fight to Annapolis and make sure that things like this don’t happen to communities across our state, and that our Governor Hogan and his administration take up the 401 certification process to ensure that, one, we have a voice in these fossil fuel projects, and two, that if they do come online, that we’re protecting our communities to the highest extent possible.

DHARNA NOOR: We reached out to TransCanada for a response but didn’t receive it by time of publishing. For The Real News, Dharna Noor in Hagerstown Maryland.