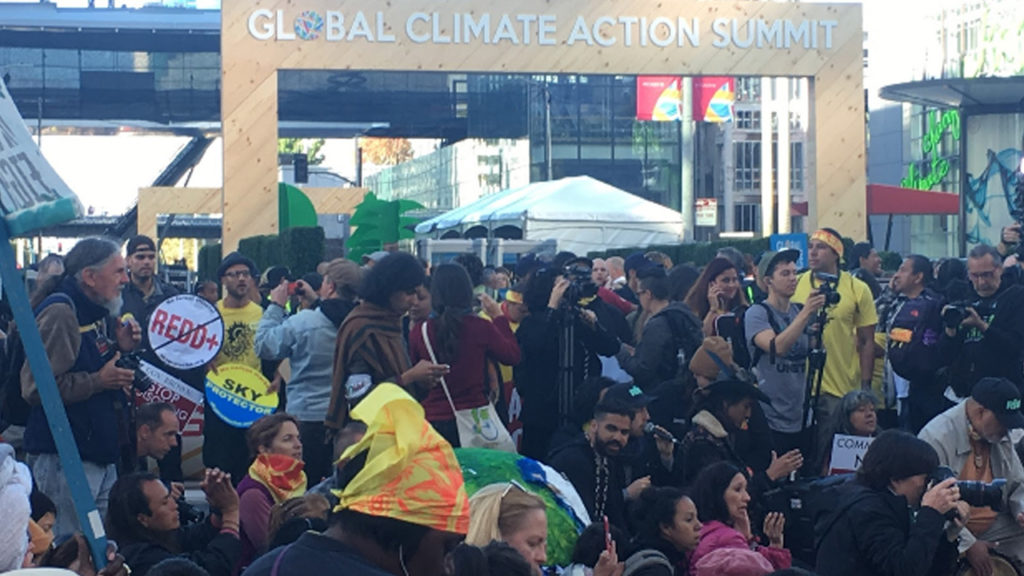 DHARNA NOOR: I’m here in San Francisco at the Global Climate Action Summit. Inside, civic leaders and business leaders convened by California Governor Jerry Brown say that they’re going to ensure that the goals of the Paris climate accord are met. But people out here say that that’s not going to happen, and that the solutions in there aren’t prioritizing the needs of those most impacted by the fossil fuel economy, and by climate change itself.

Hundreds of people took to the streets on Thursday to disrupt the first full day of the Global Climate Action Summit, or GCAS; a meeting of some 4000 politicians, business representatives, scientists, and advocates. As the Trump administration issues blow after blow to climate and environmental protections, most recently rolling back regulations on methane, one of the most potent fossil fuels, many are looking to GCAS to fight climate change. But the protesters weren’t convinced that they will.

MICHELLE MASCARENAS-SWAN: The folks that are inside that building right now are the ones that got us in this mess.

DORIA ROBINSON: They need to listen to community and invest in community-based solutions.

KALI AKUNO: We’re here to let these folks know from across the world, they came for this Jerry Brown summit, keep it in the ground. You know, no carbon trading. No techno fixes. Capitalism has to change. It has to end. And we’re here to make that clear, that we don’t have much time left.

DHARNA NOOR: Protesters crowded intersections and blockaded entrances to the summit, forcing attendees to climb over barriers to enter. At least two demonstrators were arrested. Others protested inside the summit. The demonstrators said California Governor Jerry Brown and other civic leaders haven’t prioritized climate justice.

DARRYL MOLINA SARMIENTO: Jerry Brown is being touted as a climate leader, but the reality is that we continue to face rampant oil infrastructure expansion on the ground in our communities.

JOHANNA BOWUZA: You can’t be a climate leader if you’re still permitting extraction in California.

DHARNA NOOR: At the summit, leaders made promises to fight climate change. India’s leading utility vehicle manufacturer Mahindra and Mahindra pledged to become carbon neutral by 2040. And billionaire former New York City Mayor Michael Bloomberg joined with the EU’s Miguel Arias Canete to pledge to join efforts to manage the global transition away from coal, a major source of CO2 emissions. But the protesters said those leaders aren’t fit to solve the climate crisis.

MATEO NUBE: Speculators who got us into this problem can’t be the drivers of that just transition express. To speculate is to form ideas and to take actions without evidence. We are the evidence-based folks here who understand what it means to be in right relationship with each other.

DANIEL LARIO: COP23 in Bonn, Germany, we did an action at his main event with It Takes Roots, and we demanded that he keep fossil fuels in the ground. And he responded, I agree with you, let’s put you in the ground so we can get on with the show here.

DHARNA NOOR: The demonstrators said many solutions being discussed in the global climate action summit are half measures.

CASEY CAMP HORINEK: One of the main things that we’re trying to fight against is this thing called carbon trading, this idea that you can buy and sell the air. Because when they buy and sell the air down in the Amazon, as some of the sellout, hang-around-the-fort Indians have done, even here in California, then we have the effects where we live, where the pollution is much stronger and that much longer and that much more deadly.

DHARNA NOOR: As California Governor Jerry Brown has been called a climate leader, just this week he signed a mandate requiring the state’s power sector to completely wean itself off fossil fuels by 2040.

JOHANNA BOWUZA: You can be in the pocket of these big corporations, and that’s something we have to push back against, as the people. We need to. Be louder than that voice.

DHARNA NOOR: Real solutions, the protesters say, prioritize those most affected by climate change, like people of color, Indigenous people, and poor people.

DHARNA NOOR: And the stakes, they say, couldn’t be higher.

DARRYL MOLINA SARMIENTO: If we don’t be visionary and bold in our climate leadership it will continue to lead to the climate disaster that we’ve been experiencing, from the hurricanes, the storms, the wildfires. It’s obvious that the action that’s been taken is not enough.

DHARNA NOOR: With Will Arenas, this is Dharna Noor from San Francisco.