Tens of thousands have been forced to flee wildfires across the state of California. Human actions, including climate change, are responsible, argues Professor Matthew Hurteau.

Tens of thousands have been forced to flee wildfires across the state of California. Human actions, including climate change, are responsible, argues Professor Matthew Hurteau. 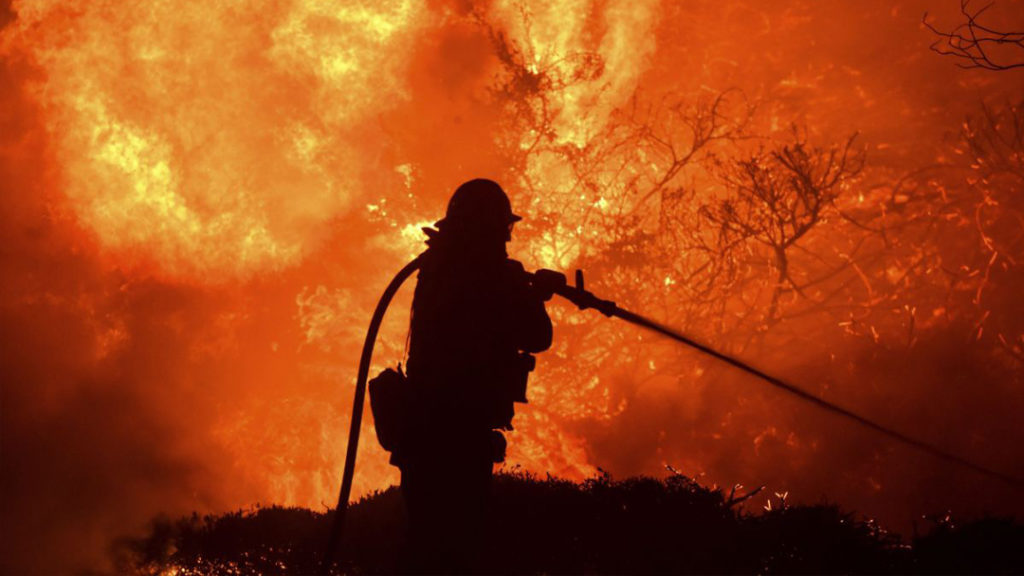 SPEAKER: I didn’t get over the fact that my mom’s ashes are in the house. She passed away a year and a half ago. Important documents–you can get those back. But you start thinking about all the things that you can’t get back.

JAISAL NOOR: Devastating wildfires in California. And they’re expected to only get worse due to climate change. This week alone, hundreds of wildfires have forced the evacuation of tens of thousands across the state. Some 40,000 were forced to flee Santa Clarita, a city north of Los Angeles, on Thursday after a fast moving wildfire raged through wide swaths of brush. 30 miles to the south, schools in LA were forced to close due to air quality and safety concerns. Hundreds of thousands more have been hit by mandatory blackouts by California’s utility, Pacific Gas and Electric. And forecasts that include dry conditions and high winds have raised the specter of more devastation across the state in upcoming days.

To learn more about this, we’re joined by our guest, Matthew Hurteau, associate professor at the University of New Mexico. Thanks so much for joining us.

JAISAL NOOR: So what’s happening right now in California, to my understanding, it’s not even the worst case scenario, despite all the devastation we’re seeing across the state. Talk about the threat these wildfires pose. We know last year over a hundred people were killed, includes firefighters and civilians.

MATTHEW HURTEAU: Yeah, there has been some real unfortunate outcomes from some of these ignitions. One of the things that’s different this year is that the fire season was relatively quiet pretty much across the Western US during the summer because we had such good snow fall last winter. Fall is really kind of coastal California’s fire season. It’s longer than that, but a lot of times fire activity picks up in the fall. In a lot of these cases we’ve got wind-driven fires. So those offshore winds when we have an ignition can really push fire in a very explosive manner through the vegetation, which challenges the communities that are in the way of the flaming front.

JAISAL NOOR: So we last spoke two years ago about the role climate change plays in these fires and how media and politicians were just waking up to that reality–just starting to acknowledge it. So that was 2017. It’s 2019 now. What’s changed since then?

MATTHEW HURTEAU: So there have been a number of changes in the state of California. I think that we’ve got both CAL FIRE, the State Forest and Fire Protection Agency, and other state agencies have really started to figure out what are some of the solutions to the challenges facing communities in California. At the same time, you’ve got legislation in the state assembly that’s been pushed forward to help fund some of the challenges that residents of California are facing from wildfire. So there’s been quite a bit of an investment at the state level in terms of dealing with some of these issues.

JAISAL NOOR: And we know there’s a lot of different factors involved. These forests are being developed, and so that’s putting more people at risk. You have climate change, which is raising temperatures and making the land drier. And then also you have things like lack of rain. Talk a little bit more about what the leading factors are today and how much of that is related to climate change exactly?

MATTHEW HURTEAU: Sure. So these typical fall fires in California are commonly wind-driven, right? And the winds aren’t new, these big powerful wind events. And so, that’s pretty consistent, things like Santa Ana winds occurring in the fall season because of atmospheric circulation patterns and temperature differentials between ocean and land surface. But what is kind of the factor that is contributing to making these worse is it’s really human caused increases in temperature. And so what that does is it preconditions the fuels. So all this vegetation, the warmer air, so the more we increase the temperature of the air, basically it demands more moisture from the vegetation.

So it’s pulling moisture out of the vegetation and making it more flammable. And so as we increase the amount of temperature that these ecosystems are experiencing, it’s making the vegetation more flammable. And then when we get an ignition event in high wind conditions it leads to this kind of explosive fire growth. The other thing that’s important to keep in mind is there’s no real natural source of ignition this time of year in California. There’s no lightning. These are all human caused events. And they may be unintentionally caused, but basically, it’s a human ignition source in these cases. And that’s what is causing the start of these fires during this really problematic time of year given wind conditions.

JAISAL NOOR: And we know that this problem isn’t just limited to California. You’re working with other scientists to mitigate fire danger in New Mexico. Talk about some of your work there and what you’ve learned.

MATTHEW HURTEAU: Sure. So similar to the Sierra Nevada, the Southwest, we have more what we call fuel driven fires. So there’s the interaction with weather conditions that allow fires to propagate very quickly. But then we’re in a system because we’re working in forests where it’s really an excess of trees and dead fuels that allow these fires to spread at the higher rates that we see during wildfire season, which in the mountainous regions is smack dab in the middle of the summer.

And our work has really been focused on trying to figure out how we can restore the right kind of fire to these ecosystems. And what that does is helps limit the amount of fuel build up in the forest. And you can think about if you have regular fire in one of these forests and you’re eliminating that fuel buildup, then when you do get a wildfire ignition or an unplanned ignition, it’s going to behave very differently than it would if you’ve got a forest conditions that are the result of over 100 years of fire suppression.

JAISAL NOOR: And we’ve talked about this before. But just can you talk a little more about that, because fires are a part of how ecosystems maintained themselves. In 100 years of stopping these fires are really controlling these fires, that really is, we’re seeing the consequences of that adding up today.

MATTHEW HURTEAU: Yeah. That’s the really unfortunate thing is we basically have 100 years of fire suppression. And so that’s caused forests in the Southwest to get more dense. It’s allowed the dead vegetation to build up–what we call fuels. And then you bring in on top of that increasing temperature, increasing drought frequency, and we’ve just basically primed the pump for larger, hotter wildfires in these forest ecosystems.

JAISAL NOOR: All right. Matthew Hurteau, Associate Professor at the University of New Mexico. Thank you so much for joining us.

MATTHEW HURTEAU: Thank you for your time.

JAISAL NOOR: And please join the conversation on Facebook and Twitter @TheRealNews. Thank you so much for watching.