A FAIR study of the democratic presidential debates clearly shows that questions for progressive candidates such as Sanders and Warren were always framed critically, while those for moderate candidates were neutral.

A FAIR study of the democratic presidential debates clearly shows that questions for progressive candidates such as Sanders and Warren were always framed critically, while those for moderate candidates were neutral. 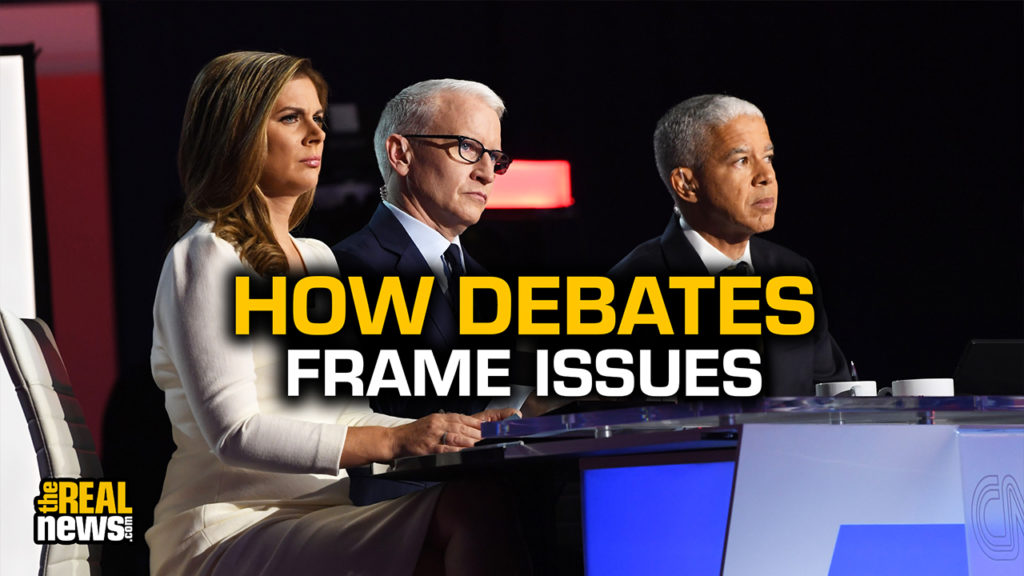 The 11th Democratic Debate is coming up on Sunday, March 15th, in Phoenix, Arizona with only two candidates this time around, Joe Biden and Bernie Sanders. CNN, Univision and the Congressional Hispanic Caucus will be hosting it. However, the debate will not really be a debate this time. Rather, it will be more like a seated conversation where audience members get to ask questions.

The Sanders campaign has questioned this new format, saying that it limits Sanders’s ability to debate Biden directly. Also, there is the issue of what questions are asked and how they are framed. According to a recent analysis published by the group Fairness and Accuracy in Reporting, FAIR, the questions in the 10 previous debates were almost all framed in a way to favor the policies of the more moderate candidates and to suggest that the progressive candidates, mainly Elizabeth Warren and Bernie Sanders, took highly questionable policy positions.

Joining me now to discuss how debate questions have been framed is Julie Hollar. She’s senior analyst for FAIR’s Election Focus 2020 Project and author of the FAIR article, Debate Moderators Frame Questions to Define Acceptable Politics. Thanks for joining us today, Julie.Julie Hollar: Thanks for having me on, Greg.Greg Wilpert: So let’s start with the premise of your recent analysis that how moderators frame questions is a problem. There’s an old saying in journalism that says that there are no bad questions, only bad answers. Is that not the case? And if not, why is the framing of a question so important?Julie Hollar: Well, you know in journalism there is this conceit that journalists are unbiased, right? That if you are watching CNN or if you are reading New York Times, then what you’re getting is some sort of objective news. And the same, of course, would theoretically apply to the debates, right? That the moderators are asking essentially unbiased questions and the candidates are getting an opportunity to present their positions.

So when you end up with questions that, in fact, are framing all of the progressive positions in a more critical light, perhaps giving more of a pass to some of the more moderate positions, people are primed to receive this information. They are primed to hear these questions as being more unbiased and, therefore, thinking, “Oh, wow. Maybe Medicare For All really is a dangerous position. Maybe we don’t need to scrutinize the moderate positions as much as we do the progressive positions.”

I think most of your viewers are probably a bit more savvy than that, but there is this general idea that media are supposed to be objective, which, obviously, is not true.

Greg Wilpert: Now you specifically look into three areas of how the moderators have framed questions, health care, military intervention and the issue of electability. Let’s take a quick look at each one of them, beginning with healthcare. Here we have a typical example of how healthcare questions were asked.

… with a very different message on healthcare protecting Obamacare. Democrats are divided on this issue. What do you say to voters who are worried that your position on Medicare For All could cost you critical votes in the general elections?

Greg Wilpert: Healthcare was the main topic in all the debates and was raised a total of 161 times according to your article. Now, what is the framing here and what are the other examples of how healthcare questions were framed?

But what we found when we looked at the questions that were being asked is that when moderators were asking the questions about Medicare For All, they were characterizing it typically in negative ways, talking about forcing people off of their private insurance, talking about what are you going to do about all of the healthcare industry workers who might lose their jobs as a result of this, talking especially about is this going to raise taxes on the middle class?

There was one question of all of the Medicare-For-All questions that included the characterization that, oh, also it will eliminate premiums and copays. But even that question talked about, at the same time, it’s going to raise taxes in the middle class, right? So in the overwhelming number of questions about Medicare For All, it was here are some problems with it, please address these problems, right?

And then what we found was that when other candidates who did not have Medicare-For-All plans were asked questions about their healthcare position, they received much less scrutiny. Biden, for instance, he had one critical question that was asked. In other words, one question that, similarly to those Medicare For All questions, asked him, I think it was will your plan do enough, something along those lines. Otherwise, most of the questions to the other candidates were things like, is Medicare For All a problem? Are these Medicare-For-All candidates being realistic? Do they owe voters a price tag on their plan?

Sanders and Warren have been repeatedly asked about raising taxes on the middle class for Medicare For All. Biden, first of all, I would be surprised if many of your viewers know what Biden’s healthcare plan is because he’s been asked so few questions about it. But he has never been asked to explain how he’s going to pay for it. And, in fact, he has never answered that question in any forums or on his website or anywhere.

Greg Wilpert: Now let’s look at the military interventions. Here’s a typical example of those kinds of questions that were asked in this area.

Recording: Senator Warren, you said you wanted to bring home all troops from the Middle East and then you walked that back to say you want to bring home combat troops.

How does that protect America’s national security?

Greg Wilpert: Now, how would you characterize this framing? I mean, what was typical about that? I mean, in what way was this favoring the more moderate candidates versus acting against or being more critical towards the more progressive candidates?

Julie Hollar: Well, what we found was that when discussing war, when discussing military intervention, that the questions very much skewed in favor of intervention. In other words, probing candidates, would you pull out even if there’s no peace deal? Would you pull out even if it meant that there might be a resurgence of ISIS? In other words, presenting potential negative outcomes of non-intervention.

Whereas, generally, there were only a couple of questions that were anti-intervention in terms of framing and those were about the Iraq war, which, at this point, has such low favorability that even in the media you can talk about being against Iraq.

Greg Wilpert: And, finally, now the issue of electability was also quite significant, coming up at least 80 times. Now, here we have an example of how this was raised.

Recording: Senator Warren, I have a question for you. On Sunday on Meet the Press, Vice President Biden accused Senator Sanders’ supporters of bullying union leaders here with “vicious, malicious misogynistic things.” You said Democrats cannot build an inclusive party on a foundation of hate. Are Senator Sanders and his supporters making it harder for Democrats to unify in November?

Greg Wilpert: Now, what was typical about how these questions of electability were raised? That is, assuming that Democrats, above all, want to defeat Donald Trump in November isn’t actually electability a reasonable issue for voters to consider?

Julie Hollar: Electability is a very valid question for voters to consider, but voters are, ultimately, the ones who decide the answer to that question. The way that you know whether a candidate is electable is, ultimately, it’s whether they do win.

But before an election you can ask [inaudible 00:08:55] is if the election were tomorrow, would you vote for Biden or Trump? Would you vote for Sanders or Trump? In those kinds of head-to-head polling, Sanders and Biden have been pulling roughly equally against Trump. Both of them defeat Trump in the polls that we’ve seen month after month, actually. So a responsible media would have been reporting for the past several months that it appears that Biden and Sanders are, at this point, our most electable candidates.

So there’s a very clear skew in the way that even the electability questions are being asked, which we would argue it doesn’t really make a lot of sense in a debate to ask electability questions because, again, that’s not something that candidates need to answer to. It’s something that the polls answer to. And so asking those sorts of questions doesn’t really help voters very much in the long run.

Greg Wilpert: Now just to summarize, basically, it seems to me that the main issue is really not so much about Sanders and Warren perhaps being asked critical questions or having questions framed in a critical way, but rather that the more moderate candidates, the more centrist candidates not having critical questions posed to them. Would you agree with that?

Greg Wilpert: Now, finally, what would you say needs to change in the way debates are organized for debate questions to be framed in a better way?

Julie Hollar: Well, first of all, I mean one thing that FAIR has been calling for for a long time is to have different people asking questions. We don’t need to have CNN host four debates. If they are hosting this many debates, we need to include progressive questioners as well.

When the Republicans hold their debates, their primary debates, in the past, they have consistently brought on, at least on occasion, a conservative questioner, in addition to the sort of establishment media journalists. For the Democratic debates, that doesn’t happen and we’ve continually called for that and the Democratic party, in the form of the DNC, does not agree to it.

Greg Wilpert: Right. Okay. Well, we’re going to continue to follow, of course, these debates and also how they’re organized, but we’re going to leave it there for now. I was speaking to Julie Hollar, senior analyst for FAIR’s Election Focus 2020 Project. Thanks again, Julie, for having joined us today.

Julie Hollar: Thanks for having me.

Why Is Bernie Still In the Race?