Watch Part 4 of Paul Jay and Aaron Mate’s interactive discussion with viewers about the real reasons Trump should be considered a traitor by the American people – From a live recording on August 2nd, 2018

Watch Part 4 of Paul Jay and Aaron Mate’s interactive discussion with viewers about the real reasons Trump should be considered a traitor by the American people – From a live recording on August 2nd, 2018 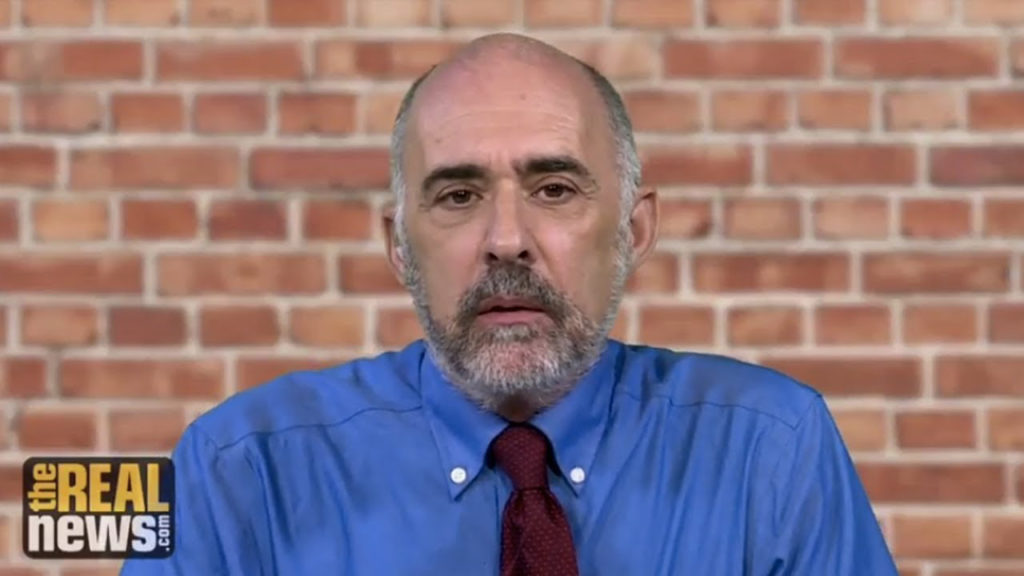 AARON MATE: I want to play a clip that I think speaks to the chauvinist attitude that this Russiagate scaremongering has galvanized. He was speaking on the Bill Maher show, Real Time With Bill Maher on HBO, and he was attacked by Maher and the rest of the panel for essentially urging a sober look at this whole Russia thing, and even encouraging basic talks between the U.S. and Russia. This is that clip.

BILL MAHER: Do you think this is appeasement, when he meets with Putin?

LARRY WILKERSON: No, I think we need to have a meeting. We’re getting very, very close to developing doctrine- the Russians already have, we’re working on it- and the missiles, nuclear-tipped missiles, to accompany that doctrine. And we’re getting back to a point where we could actually find ourselves contemplating nuclear war.

BILL MAHER: But why have a meeting with someone who attacked us in 2016?

LARRY WILKERSON: But you need, you need to talk to your enemies.

BILL MAHER: Talk to your enemies- but without preconditions? I mean, really? Would we have had just a friendly-

LARRY WILKERSON: I wouldn’t have set any preconditions at all. I’m not saying I’m in favor of this particular president talking to this particular ruler in Moscow, but we need to talk.

BILL MAHER: All our intelligence agencies said that Russia attacked us in 2016. Yes, it was cyber. It wasn’t with armaments. But it was still-

LARRY WILKERSON: Russia did no more than we have done to any number of countries since 1947 and the creation of the CIA.

BILL MAHER: That’s true, but it doesn’t make it right. It’s still us. I’m sorry, but I’m on our team.

LARRY WILKERSON: It doesn’t make it something that should stop a meeting between two leaders who own more nuclear weapons than everybody else in the world combined-

LARRY WILKERSON: And who are getting closer and closer, especially in NATO-

AARON MATE: So that is Larry Wilkerson sparring with Bill Maher on Real Time With Bill Maher. And as many viewers will know, Col. Wilkerson is a regular guest every week here on The Real News, and he just did a segment in an interview with us on that, on his appearance on Bill Maher, which you can check out at TheRealNews.com.

Paul Jay, listening to that, here you have a liberal, nominally liberal, host like Bill Maher getting into it with Col. Wilkerson just for pointing out that talks are a good thing, and that we do it elsewhere. And Maher’s response is that, well, I’m on our side. Your thoughts on the, on the chauvinism that Russiagate has brought out in liberals like Maher.

PAUL JAY: Well, that comment, he says, yeah, I know what we do is wrong, but I’m on our team. So I don’t know. What can you say? You scratch most Americans and you find chauvinism and this belief in America is number one, and all this. You know, you go- my kids go to kindergarten. You know, they’ve got to put their hand, supposedly put their hands on their heart and pledge allegiance to the flag of the United States. I mean, actually, I’ve asked, I’ve given my kids the choice, and they don’t want to. In fact, they’re not standing and pledging. In fact, most of their class doesn’t want to stand and do it, either.

But of course, as Americans are inculcated in this deep identification of Americanism, as if we are all one thing in America, as if there’s no classes, as if the interests of the oligarchy are the same as the interests of the rest of the people here, and that this posture of the need for this militarization is somehow to defend America, not to assert global hegemony. I should even go another step, which is the argument often given is global hegemony itself is actually a defensive position. And you know, Homeland Security, and so on.

The deep roots of this chauvinism, American exceptionalism, militarism in the Democratic Party should not be forgotten. The Democratic Party is the party of the Vietnam War. Truman, the Democratic Party, is the party that actually used weapons of mass destruction and dropped nuclear bombs on Japan. This deep feeling in American liberalism that this defense of America, supposedly the land of rights and freedom and so on, requires a strong military, and that America is the fountainhead of enlightenment and defense of enlightenment. There’s a liberal, secular version of Steve Bannon and Trump’s defense of Western Christianity. It’s the same kind of faith base. There’s simply no objective evidence for any of that. I mean, clearly under both Democrat and Republican administrations, dictator after dictator after dictator has been supported.

You know, the examples always given are the Saudis. We talk about that a lot. In Latin America. We talk about that a lot. But what it- let’s not forget under both Democratic Party and Republican parties there was support for the fascist Franco in Spain for years; support for the Greek fascists for years. This is not- you know, the reality of America and the American footprint globally is not for democracy. It’s for American dominance. And when possible- yeah, I would say when possible- the majority of the American elites would rather not have dictators. They want free movement of capital. What does that- you know, free moment for American capital to come in and dominate through the power of money, rather than through the power of a dictator and guns. Yes, but they don’t mind dictators if the alternative is a country that wants some kind of independence or some kind of socialism. They’d far rather have right-wing dictators.

This is in the liberal mentality as much as it is in the right-wing conservative mentality. They just both- you know, one has this vision of defending Christian values, and the other one is defending- it’s OK to have a dictator over there because we’re such liberals over here. Of course, that’s not true here either. You know, we’re on our team, Bill Maher says. So we’re team of gerrymandering? We’re on the team of voter rights suppression? We’re on the team of suppressing the Constitutional rights- as I keep saying, quoting the DOJ report of the Baltimore Police Department, where it said people’s Constitutional rights are being denied every single day in Baltimore. And of course, not just Baltimore. In cities across the country, where were African-American men can be shot down, practically one every day, and almost no consequences to the police that are doing that. I mean, that’s the team we’re all on?

So this crazy mythology that’s spouting out of these liberals’ mouths, it’s dangerous, it’s vile, and it’s partly driven because they’re so partisan they just gotta wound Trump. So you know, if somehow something wounds Trump, anything’s justifiable if you’re going to weaken the Trump presidency. And it’s such a mistake, because even if it hurts Trump, it’s creating such fanaticism- or I should say feeding such a fanaticism- that the next Trump will make use of that. And whether that comes in the face of a Democratic Party or a Republican Party, this is the fanaticism that supports war.

AARON MATE: Right. And the people, I think we could agree, best placed to fight back are the traditional left; people who’ve always stood up to racism and fascism and white supremacy.