Kevin Lin from the Lausan Collective of Hong Kong artists and activists unpacks the complexity of the struggle historically and in the streets.

Kevin Lin from the Lausan Collective of Hong Kong artists and activists unpacks the complexity of the struggle historically and in the streets. 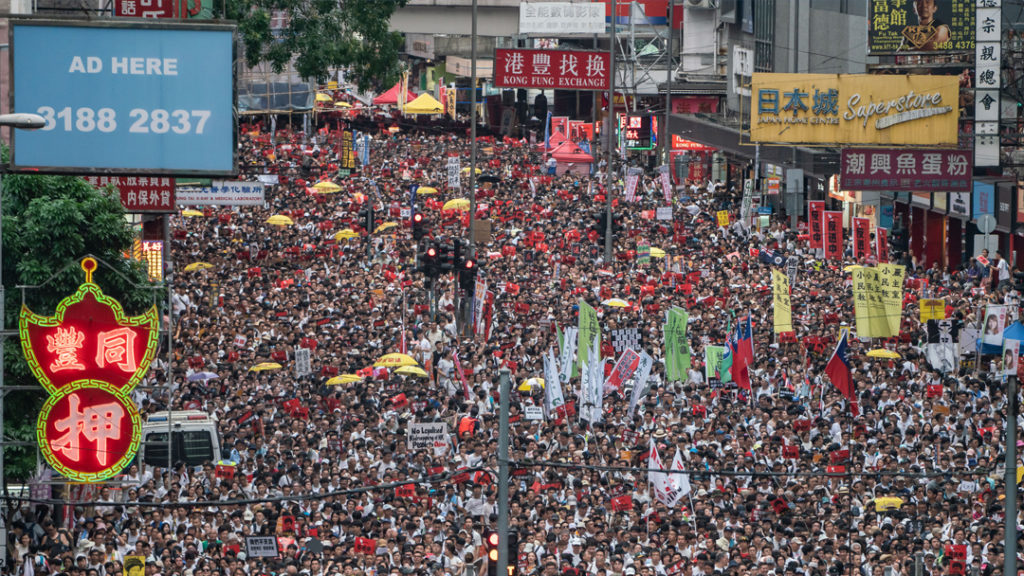 SPEAKER: He was hit on the head by police with a baton.

SPEAKER 2: We need to take him to the hospital.

MARC STEINER: Welcome to The Real News. I’m Marc Steiner. Good to have you all with us.

Those are the protests in Hong Kong, of course. And they’ve been roiling consistently for the last six months. The complexity of this uprising, of this story, has not really been told. Folks at Jacobin published some articles by Kevin Lin who has interviewed student labor and left wing activists in Hong Kong. Reading his analysis and listening to those voices, you begin to understand this multilayered struggle between the authoritarian capitalism of China and the free market, neoliberal capitalism of Hong Kong, a place where capitalist and real estate speculators surge and where poverty is soaring. It’s a story. Yes, with a fight for democracy. It’s also part and parcel of a larger struggle in this world between left and right, between workers and people who own the industries, and yes, between the United States and China. But it’s all too easy just to blame all this on U.S. intervention.

So welcome. And I look forward to our conversation with Kevin Lin, who researches the Chinese labor movement; is an activist writing and speaking about the Hong Kong protest; and is a member of Lausan, which is a collective of writers, researchers, and activists, artists from Hong Kong and its diasporas. And Kevin, welcome. Good to have you with us.

MARC STEINER: This is a really complex piece. People have a tendency when they look at these protests, whether it’s Hong Kong or protests happening in any part of the globe, in Lebanon or Chile or wherever they happen to be… And immediately I think the American impulse is to identify with the protesters fighting for democracy. But in this, in some of the stuff I’ve been reading that you all have been working on, when you frame it in some ways as the kind of authoritarian capitalist nature of China and then there’s kind of this kind of more neoliberal free marketplace that was Hong Kong, that’s part of their struggle. So parse through some of this complexity for us.

KEVIN LIN: Yes, absolutely. The protest movement in Hong Kong has entered its sixth month. This is a really unprecedented protest in recent Hong Kong history, but also in recent Chinese history. The last time we’ve seen such a sustained large scale protest movement really goes back to 1989, the democracy movement in Beijing–not only in Beijing but actually across the country. So this is extremely important as a historically significant movement. And I think we deserve to really analyze the situation very closely rather than simply describing that as the result of U.S. or UK intervention.

MARC STEINER: So in one of the articles that you wrote in Jacobin, you quote one of the activists. And one of the activist quotes in this was: “Simmering below the surface is a crisis of Hong Kong itself as a liberal free-market enclave within a state-managed capitalist nation-state, an always-unstable configuration now on the verge of exploding.” So this kind of intra-capitalist tension is taking place. Now, how much of that is what’s fueling this, or is it part of defining the struggle but really doesn’t define it in its whole? Talk a bit about that.

KEVIN LIN: Yeah. This is really, really complex and the understanding has to be historically rooted. Hong Kong for the past few decades has really been an extremely important financial center in Asia. And when Hong Kong was handed over back to China in 1987, that was the hope, that Hong Kong will be acting as this hub for international capital to utilizing China. And then in the last 10 years or so, Hong Kong increasingly has been seen as a hub for Chinese companies to grow abroad and raise capital. So the importance of Hong Kong for the capitalist structure, both in mainland China but also in Asia and internationally, is extremely significant. And a byproduct of that is extremely neoliberal, capitalist, free-market policies in Hong Kong itself that resulted in extreme level of inequality, housing crisis, and very sort of depressing economic prospect for young people. And that’s some of the long-term factors that really fuel this protest.

MARC STEINER: It’s really difficult. What I’m trying to get to is that it seems to be really difficult to try to ideologically define these protests. And I think that’s what people are trying to do, whether they’re trying to say the United States is behind it or whether it’s saying these are left-wing activists. But nothing is that simple here. How do you ideologically define what’s going on at this moment?

KEVIN LIN: So the protest has really presented itself as not ideological. And that is actually a great conscious decision on the part of the protesters, because in the protest there are people on the left, people in the middle, and people on the right. And what they have learned from their experience in the 2014 umbrella movement is that in order to achieve unity in the movement, they have to subsume ideological debates and their unity of action. So that makes it really hard to really discern the kind of ideologies and politics in the movement. But also you have to acknowledge that the left, the kind of socialist and anti-capitalist left in Hong Kong has really been weakening the last few decades. The left is really small in Hong Kong, therefore you know it has not really been able to shape the debate and try to steer the movement toward a more social democratic or even socialist direction.

MARC STEINER: That’s really interesting. Let me explore that for just a bit more with you. So what does that mean; why is the left so weak? What about labor activists and student labor activists? Some of the people you interviewed put out this website, there is your group, Lausan. So A) Why is the left so weak? And what’s the history there, and what role do they really play in these protests?

KEVIN LIN: Again, the history is really important here. Hong Kong was a British colony for much of this last century. There was a left movement in Hong Kong, mostly underground, that was opposed to the British colonialism. But that left was also connect to the Communist Party in mainland China. So basically after 1997 when Hong Kong was returned to mainland China, what remained of the left were people who were aligned with the Communist Party in China. And historically in Hong Kong, the sort of non-Stalinist or non-CCP aligned left was always very small. And it was just all further weakened in the last two or three decades, also in part because of the relocation of manufacturing of jobs from Hong Kong to mainland China since the 1980s and 90s. So nowadays it’s a very strong social labor movement that underlies a left movement in Hong Kong. So that’s also one reason that the labor movement, similar to the left socialist movement, is pretty weak in Hong Kong right now.

MARC STEINER: Get us clear for one thing, and then as we close out here. You do see China, The People’s Republic of China, not as a socialist nation, but as an authoritarian capitalist nation if I have that correct. Am I right about that?

KEVIN LIN: That is correct, yes.

MARC STEINER: Talk about that definition and how that plays into the struggle that’s going on now.

KEVIN LIN: It’s very clear. There remains some on the U.S. left for example, who still regard China either as socialist or at least not entirely capitalist because China retains a very significant state sector. However, if you look at labor relations, if you look at how the economy is structured, it’s is very much going to stay a capitalist society, with a very strong state and a state sector for sure, but it is the capitalist competition and logic of profit maximization that really governs the economy and society.

MARC STEINER: So as you look ahead with this struggle going on… And you said it’s a very broad struggle; involves lots of different people from many ideologies. A) I’m curious where you think this can go. It’s hard to watch this and think about the Hong Kongians themselves actually winning against the People’s Republic of China, what they want, A. But B) I was curious where you think that the student activists, the left labor people, the socialists, how they fit into all that and what may happen.

KEVIN LIN: This has really been an ongoing debate in Hong Kong, ever since the 2014 umbrella movement. There was a left formation called Left21 who tried to intervene in the 2014 umbrella movement to talk about social and economic issues, to raise an issue about inequality, about housing, about the rights of workers, including the more than 300 thousand migrant workers from Southeast Asia. But Left21 as a formation pretty much went out of existence in the last few years. So therefore we really don’t have a very organized voice on the left in Hong Kong to really talk about those social and economic issues.

But what’s exciting, and as you mentioned that at the beginning of this interview is, is Lausan, who is a collective of mostly researchers, activists, artists from either from Hong Kong, based Hong Kong, or the diaspora in the U.S., North America, or Europe. What’s exciting about this development is the Lausan Collective specifically wants to be in dialogue with the protests in Hong Kong, but at the same time develop an internationalist, a decolonial and left critique of the movement, and also of Hong Kong society in general. That is something that is very new and significant in helping people understand the movement. But also through translation from English back to Chinese, articles had been published the Hong Kong press. So the hope is that some of that discussion within the Lausan community, Lausan Collective, can also feed into the protest movement in Hong Kong.

MARC STEINER: Well, our viewers can see the Lausan site on our screen at the moment. And you really should check this out. It’s fascinating articles. And I agree with Kevin. This is at the beginning of a new movement that is really interesting for all of us to watch here. And Kevin Lin, I want to thank you for your work, and thanks so much for taking the time today. I look forward to many more conversations with you and your friends and comrades in Lausan to continue our conversations about Hong Kong.

MARC STEINER: Thank you very much. And I’m Marc Steiner here for The Real News Network. Thank you all for watching. Let us know you think. Take care.

Haiti: Four Killed as Authorities Crack Down on Anti-Government Protests

October 2, 2019
Sign Up for Our Newsletter
Help Us Make Real News!