“Hands Off Venezuela” Rallies Held in Cities Around the World 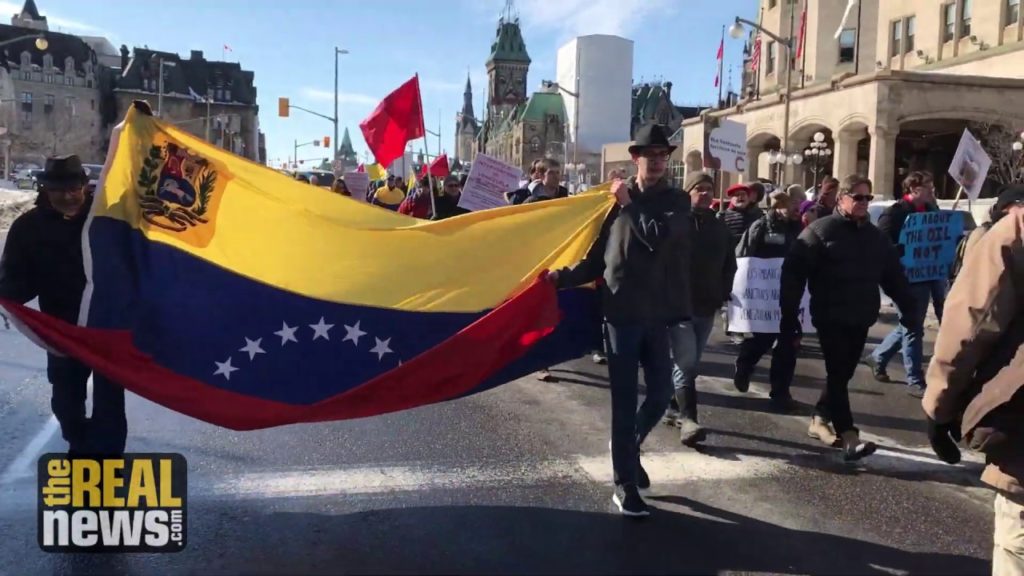 DIMITRI LASCARIS: This is Dimitri Lascaris, reporting for The Real News Network.

On Saturday, February 23, protesters gathered in cities across Canada and the United States to demand that Western powers keep their hands off of Venezuela. The aim of the protests was not to express support for Nicolas Maduro or any particular politician or political party in Venezuela. Rather, the protesters sought to defend the principle that Venezuela is a sovereign nation, and that its current economic and political crisis should be resolved peacefully by the people of Venezuela, without economic or military corrosion by external powers.

One of the external powers which has led the initiative to replace Venezuelan President Nicolas Maduro with Juan Guaido, a man who has never been elected as Venezuela’s president, is the Canadian government of Justin Trudeau. As a result, protesters gathered outside Trudeau’s offices in Ottawa, Canada this past Saturday, and then marched to the United States Embassy to reiterate their demands.

For The Real News, I attended the Ottawa protest and spoke to two of its organizers. This is what they had to say.

KEVIN SCARETT: There is a lot of opposition to this policy here, not just in Ottawa but across the country. I really believe if people knew and understood that broader context, there would be massive opposition, and the government would not be able to get away with what they’ve been doing.

SPEAKER: This demonstration that’s happening in front of our prime minister’s office is not a singular event. In Montreal and all over the world, human beings are standing up to say “Not in our name.”

DIMITRI LASCARIS: This is Dimitri Lascaris, reporting for The Real News Network outside the Prime Minister’s Office in Ottawa, Canada.