The US has failed its regime change venture in Venezuela. Former Chief of Staff to Nicolás Maduro, Temir Porras joins Sharmini Peries for analysis

The US has failed its regime change venture in Venezuela. Former Chief of Staff to Nicolás Maduro, Temir Porras joins Sharmini Peries for analysis

Guaidó Out of Gas 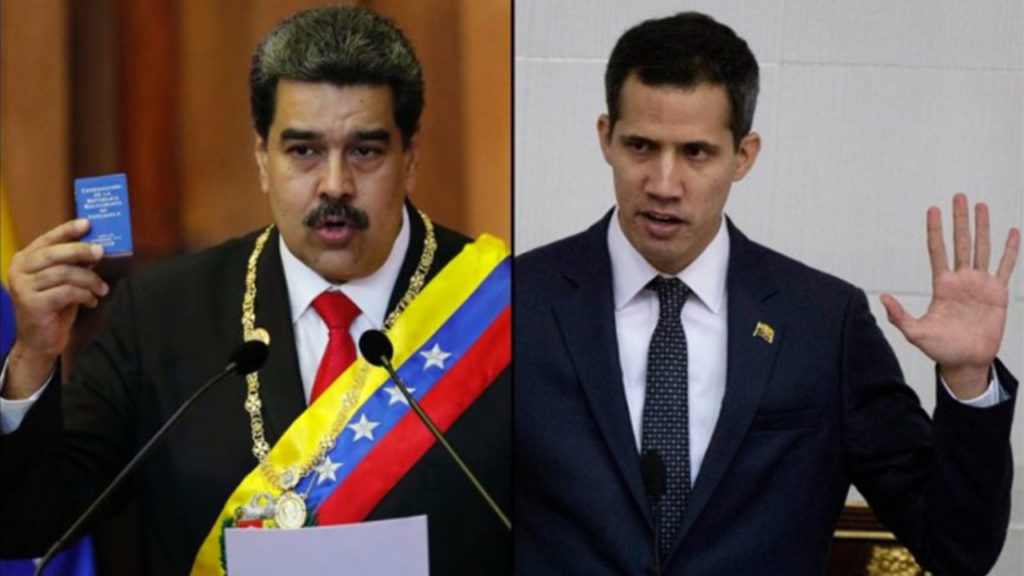 SHARMINI PERIES Now, Temir, off the top I played Elliott Abrams speaking at this conference. Now, he is generally considered to be a serious foreign policy hawk, and much along the lines of John Bolton. But that was a bit of a more moderating tone in that conference. And I’m wondering whether you believe that the U.S. position itself has changed in light of the fact that, you know, Guaido has not been very successful at bringing about regime change in the U.S., and also their efforts to try to convert the military, or certain elements of the military, to come over to Guaido’s side. That hasn’t succeeded. The military is very strongly behind the president of Venezuela, Maduro. So do you think this sort of lower key, you know, talking about PSUV being a part of the process, and all of that has a lot to do with the fact that they were unable to impose a regime change in Venezuela?

TEMIR PORRAS I think that the last four months, again, have indicated some people in the U.S. administration about the reality, the political reality of Venezuela. Again, since that in January, and probably before January, preparations for the self-proclamation of Mr. Guaido, his allies, his party, probably, the closest people to Juan Guaido oversold their ability to generate regime change in Venezuela. Probably because of the deteriorating economic and social conditions there was this assumption that a new leader, somebody, a fresh face, a younger person who wasn’t necessarily closely associated with the history of his party because he was not on the front line of the previous battles, and probably would attract less criticism that someone like Leopoldo Lopez, you know, the historic leader of this–all these elements were aligned for the Venezuelan opposition to sell to some members of the international community, and to the U.S. administration in particular, this over-optimistic scenario seen from their perspective, and given, again, the influence of neoconservative or hawkish foreign policy actors in Washington, these arguments have traction.

But again, I also imagine that in the U.S. administration, if there is one person that is supposed to be hands-on 24/7 on Venezuela, it is Mr. Abrams. And again, you know, no matter what his background or his political vision is, I mean, he’s also an analytical person, and he has seen, again, how far from reality this initial assumption from the Venezuelan position is. So again, I think it’s also a positive evolution if the U.S. administration acknowledges the complexity of Venezuelan politics, and understand that there will be no solution that does not involve all the stakeholders, and one very important, that is, Chavismo, through its PSUV party or the smaller parties of the left, that the Venezuelan society is plural and has a diversity of opinion; that Venezuelan society has changed since the 1990s. Let’s remember that some of the senior figures in the so-called, again, interim government of Mr. Guaido, like Mr. Ricardo [Holzman] or Mr. Tarre Briceno, who is Mr. Guaido’s envoy before the OAS, are oldtimers of Venezuelan politics, people who were in Venezuelan politics in the 1980s and the 1990s. And I suspect that they might think of the country within the framework of the 1980s and the 1990s not knowing, or not willing–not being willing to acknowledge that the country has changed, and that it will have, in any case, to deal with Chavismo and with the PSUV, and with a much transformed Venezuelan society where the people of Venezuela, the poor people of Venezuela, you know, have been empowered, will defend their rights. And again, no matter how unsatisfactory the current social and economic situation is, we would not be willing again to accept just going back to the neoliberal policies of the 1990s.

So again, I think it’s a positive evolution by Mr. Abrams, and I hope that this evolution is shared among the decisionmakers in Washington, because that’s, again, another question mark. It seems to me also to be a relatively fragmented administration, where, again, depending on who you listen or read on Twitter, it is difficult to know who makes the calls. But again, Mr. Abrams is obviously the person in charge, so I think it’s important that he made the statement.

SHARMINI PERIES And he is the U.S. envoy appointed by President Trump to manage the Venezuelan situation. Now, finally, Temir, let me ask you, what do you think of the idea that PSUV should participate as equals to all other parties in Venezuela, as Abrams had stated? Now, we are looking at a country that is incredibly suffering as a result of the economic sanctions. What normally governments are able to do for their people that this government is unable to do, a lot of people blame the Maduro government for that. While some of that blame should rest within the Maduro government, some of it is obviously externally imposed, and people are suffering. And when they’re suffering at this level, you know, people want change, right? So the impetus is to want something else besides what they have. Your thoughts on this kind of destabilising tactic that the U.S. has been engaged in, and the impact that will have on any democratic process that might be forthcoming as a result of these negotiations?

So if the decision is made by the Venezuelans to forward in this dialogue process, I understand that at some point in time, if the process leads us to some sort of election, for instance, there will have to be a decision made by the members of the international community, and especially from the United States, to sort of acknowledge the progress that has been made. So at some point in time, and I think the discussion needs to start right now, you know, from Venezuela to the United States, that they need to think how to undo this battery of sanctions that have been imposed on the country. That there needs to be sanction relief, sanction lifting as the process as Venezuela moves on. Because again, in their way of thinking, if the sanctions are supposed to be in place in order to generate a political change or create incentives for the different political actors to move forward, if those political actors start moving forward, the U.S. government should return, undo or start lifting the sanctions that are hurting the Venezuelan people. That’s the very first reason why they say they should lift them, anyway. But on the other hand, if there is a negotiated, you know, a positive political process in Venezuela, the sanctions will only become an obstacle for that process moving forward because naturally, of course, people coming from the PSUV, to answer your question, and backing President Maduro, will see that, you know, going to potentially elections in the future under sanctions of course will be a great disadvantage. Again, going to elections while people are suffering economically and socially, and that the government does not have the tools to solve that problem because the sanctions are being imposed is, of course, unfair.

But for that to happen again, I think it needs to come from the Venezuelan society. But again, both civil society and political organizations need to, you know, advocate for this in a more unified way, and maybe the United States understand that the solution has to be reached in Venezuela, and for that they need to back off and let the Venezuelan society find their own solutions. And that implies, again, sanctions relief or sanctions lifting.

TEMIR PORRAS Thank you for having me, Sharmini.