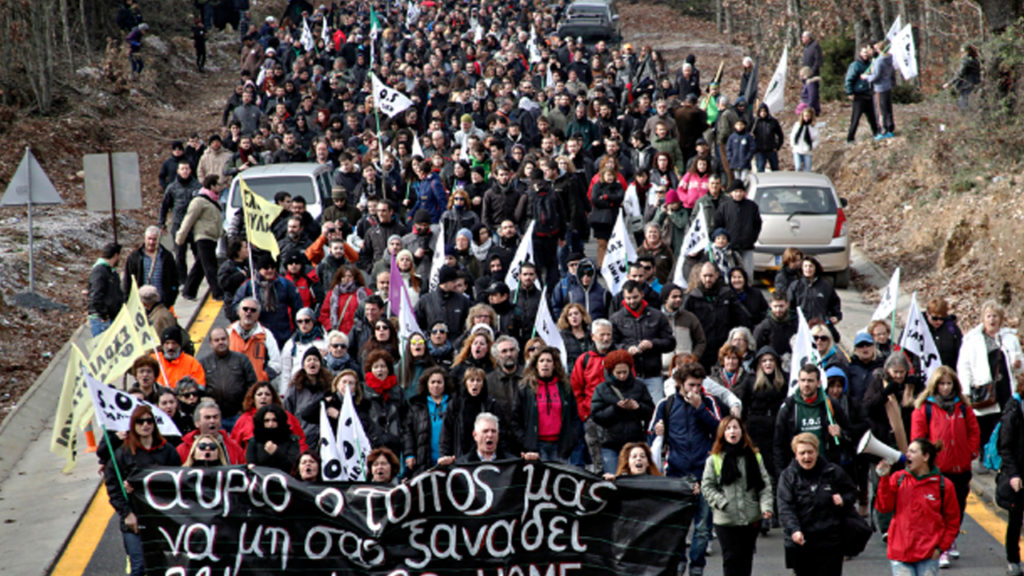 This past October, The Real News was in Thessaloniki, Greece to report on the prosecution by the Greek state of 21 local residents charged with various criminal offenses in connection with an alleged arson at the gold mine of Eldorado Gold in Halkidiki, a pristine region of northern Greece. Eldorado is a Canadian gold mining company. Resistance to Eldorado’s mine was featured in the Avi Lewis Naomi Klein documentary. This Changes Everything. The court in Thessaloniki has just handed down a verdict in this massive criminal trial.

Now here to discuss the verdict with us is Maria Kadoglou, coordinator of Hellenic Mining Watch. She joins us from Halkidiki. Thanks for joining us today, Maria.

DIMITRI LASCARIS: So, Maria, what is the verdict?

MARIA KADOGLOU: The verdict was that all 21 residents were acquitted of all alleged crimes. It was clearly demonstrated in court that these charges against them were completely fabricated by the police. It turned out, it was revealed in court, that the evidence on which the case was based were not collected by the police, but they were collected by the security company of Eldorado Gold, which is clearly illegal. It was also demonstrated in court that the police planted the incriminating evidence in order to have convictions of the local people. And after that, the court decided to acquit them all.

DIMITRI LASCARIS: So this is not, I understand, the first time that Greek prosecutors have alleged serious criminal offenses against those who have engaged in resistance to the Eldorado mine. Could you tell us what has happened in prior prosecutions relating to Eldorado’s gold mine in Halkidiki?

MARIA KADOGLOU: Until now we have had around 500 people charged with various offenses relating to their resistance to the mine. Now, most of these cases have already taken place, and most people have been acquitted. Of course, there have been some occasions where we’ve had convictions of one year or so, but most of the decisions were good decisions. And for the others we have, we have to wait for the second degree trials.

DIMITRI LASCARIS: Now, there are other prosecutions pending, I understand, against local environmental defendants. What is the status of those prosecutions, and how many people are being pursued by the criminal authorities?

MARIA KADOGLOU: There’s one more big trial starting this December on the 19th, with 25 local residents accused of pretty much everything with pretty much the same as the previous case. Attempted homicide, arson, explosions, et cetera. We clearly believe, we believe that they will be acquitted as well.

MARIA KADOGLOU: Well, yes. But you can imagine that five years of having these very, very severe charges against you is a huge. And of course these people had restrictive measures against them so they were not allowed to demonstrate. And if they were arrested for something else they would go to prison for the previous alleged offense.

DIMITRI LASCARIS: Well, we’ve been speaking to Maria Kadoglou of Hellenic Mining Watch about the acquittal of 21 environmental defenders charged by the Greek state with serious criminal offences or criminal accusations in the course of their resistance to the gold mine of Eldorado Gold in Halkidiki, Greece. Thank you very much, Maria, for joining us today.

MARIA KADOGLOU: Thank you very much.

DIMITRI LASCARIS: And this is Dimitri Lascaris reporting for The Real News from Montreal, Canada.