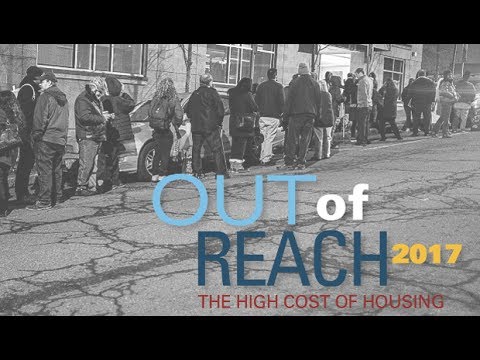 Aaron Maté: It’s The Real News. I’m Aaron Maté. There are more than 3,000 counties in the United States, but if you make minimum wage, a new study says the number of counties where you can afford to make your rent out of those 3,000 is just 12. That’s for a one-bedroom. If you want a two-bedroom and make minimum wage, the number of counties you can afford to live in are zero. These numbers from a new report by the National Low Income Housing Coalition. Joining to comment is Glen Ford, executive editor of Black Agenda Report. Welcome, Glen.

Glen Ford: Thanks for having me.

Aaron Maté: What’s your take on these stunning numbers?

Glen Ford: You know people were talking about a minimum wage of $15 an hour, and that’s set to go into effect in a couple of places in the next couple of years. But the study shows that even in Los Angeles County and New York City where there’ll be a $15 an hour minimum wage in a couple of years, you won’t be able to afford an apartment with $15 an hour. You’d have to have a $23 an hour job to afford a one-bedroom apartment in Los Angeles County, and you’d have to be earning about $27 an hour to afford a one-bedroom in New York City. By afford, we mean to pay 30% of your income on rent and utilities. Even in relatively low-rent places like Albuquerque, New Mexico and St. Louis, the study shows that a minimum wage worker would have to work a job and a half in order to be able to afford a one-bedroom apartment.

Especially in the past decade, the rent has been increasing at a far, far quicker rate than inflation. Half of the population in this country pays at least 30% of their income for housing, and one out of four people pay 50% or more of their earnings to the landlord. The reason is that the private developers aren’t building affordable housing. They claim that they can’t make a profit from it.

And the federal government has, for decades now, been trying to get out of the business of federal public housing for the poor. That’s gone on under both Republican and Democratic administrations. There has not been any significant new federal investment in affordable housing in more than 30 years, since the 1970s when the Section 8 subsidized voucher program went into effect. But that program only reaches a fraction of the people who would be eligible for it, and there are long, long lines of people who’ve already been approved who are waiting to get on the program. And lots of landlords, huge proportions of them don’t accept Section 8 even in places where it’s illegal not to accept Section 8. Now we have President Trump, and President Trump wants to cut the Federal Housing Administration by 15%. So we see that the crisis only deepens, and there is no national movement to address that crisis.

Aaron Maté: Glen, I’m going to put to you the counterargument that I’ve seen from some right-wing critics of this study, which is that, and you mentioned this, that the standard used to judge what is affordable housing is basically 30% of your income. That is the federal government standard, but they say that that standard is not fair, that simply if we raise what the standard is to, say, 50%, then all of a sudden people who earn minimum wage can afford the housing that the study says they can’t.

Glen Ford: Yes, well, that’s a semantic cure for poverty, isn’t it? We just redefine what poverty is, redefine what affordable is, redefine how much people should have left over for groceries and such. With the wave of a wand, you solve the problem. The people who put forward that kind of argument really don’t want any intervention in the market, and they’re usually people who are heavily subsidized by the developers, the ones who won’t make affordable housing.

Glen Ford: Of course. This inflation in housing costs, which shows no signs of letting up, there must be an intervention or else housing costs will eat up whatever gains workers win in terms of minimum wage. Again, even if we’re talking about $15 an hour, and the federal minimum wage is $7.25, but even at $15 an hour, a minimum wage worker would be hard-pressed to find an apartment to live in in almost the entire country.

Aaron Maté: Can you talk about why you think there has not been a national movement around this issue but there has been on the issue of the minimum wage?

Glen Ford: I think race is at the center of this crisis as it is at the center of politics in the United States. Public housing went out of favor when public housing became overwhelmingly Black so that we see even in Black-run or nominally Black-run cities, Black mayors and city councils are tearing down public housing and putting people into the street. There has developed in this country the belief that concentrations of poor people are by definition bad while concentrations of affluent people are by definition good. That perspective is all tied in with what race those poor people are.

Aaron Maté: I imagine there’s just a practical self-interested issue here, too, that if you’re a union like the SEIU, it’s worth your while to help fund a movement for a higher minimum wage because ultimately if that works out and the workers unionize, you can take some of their dues, but there’s not a similar dynamic around housing.

Glen Ford: That’s one of the problems of unions. Unions have a narrow focus. That’s their job to increase the wages and better the working conditions of their members, but although unions are good at issuing broad position papers on a wide range of issues, they don’t really work too hard on things like housing. They don’t put real money behind that.

So what we need, of course, is a broad-based movement of people who put housing first in terms of a priority. We used to have that back in the ’60s and ’70s, and that’s why we got Section 8, and that’s why rent control became the order of the day in many cities. But we don’t have that kind of movement. We can’t depend on unions to substitute for the grassroots kinds of movements we need.

Aaron Maté: That’s interesting. A lot of people might not know the history of activism helping win such things as public housing, affordable housing.

Glen Ford: Sure. You win nothing without a struggle. The people who are in pain, suffering the pain of inadequate housing are the ones who must demand it. A couple of years ago, a nobody ran for governor of New York on a ticket of the rent’s too damn high, and he got a surprisingly good showing at the polls because it’s a popular issue. But the landlords fund most of the campaigns, not just in New York City but in Chicago and most of the big metropolitan areas. They’re the local power brokers, so you need a massive organizing of regular people to go up against that kind of clout.

Aaron Maté: In terms of what housing activists can learn today from the activism of the past that you mentioned, the ’60s and ’70s, can you talk a bit about how they went about their struggle and how they won?

Glen Ford: They won by a whole range of tactics from squatting, which was widespread in the ’60s, ’70s, and into the ’80s, to of course the rent strike. I was involved in lots of rent strike activities back in the ’70s. Landlords were made examples of, and other landlords learned the lesson. It was not necessary to strike then because of the example you made of the targeted bad actors. So there’s no secret to how this is done.

Also, publicity campaigns. Landlords don’t like to have their name dragged through the mud because their brand is all wrapped up in the value of their property, and no one wants to see the value of their assets deflated because of their bad reputation. So there’s the widest range of tactics that are available. They’re just not using them.