General Motors Held Responsible for Abuses in its Plant in Colombia

A protest at the annual GM shareholders' meeting in Detroit called attention to the fact that GM in Colombia regularly fires injured workers and fails to provide them with compensation. Frank Hammer, who recently visited the GM worker's protest in Colombia, organized by the ASOTRECOL union, reports on the shareholder meeting and what is going on in Colombia

A protest at the annual GM shareholders' meeting in Detroit called attention to the fact that GM in Colombia regularly fires injured workers and fails to provide them with compensation. Frank Hammer, who recently visited the GM worker's protest in Colombia, organized by the ASOTRECOL union, reports on the shareholder meeting and what is going on in Colombia 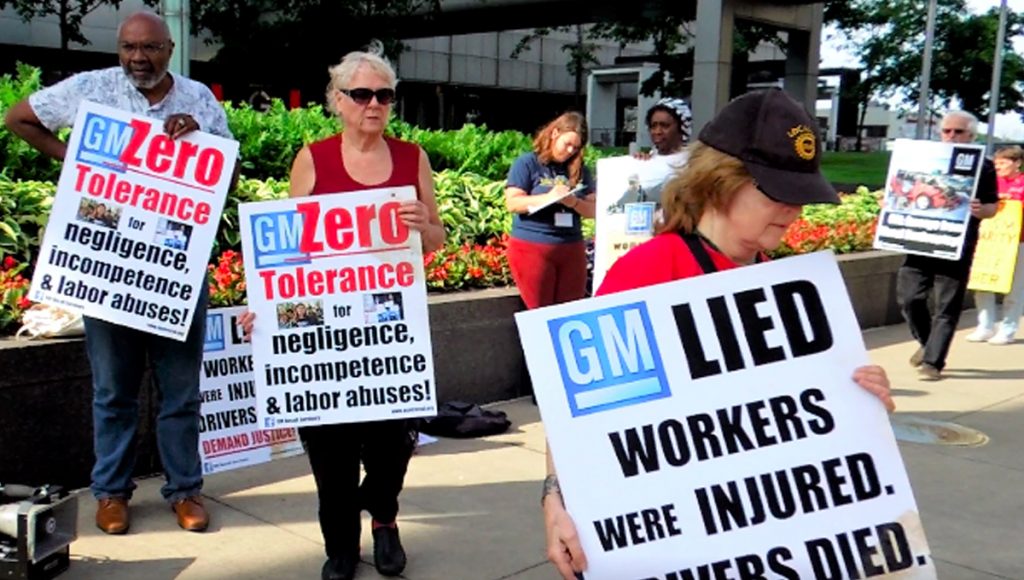 GREG WILPERT: It’s The Real News Network, I’m Greg Wilpert, coming to you from Quito, Ecuador. General Motors held its annual shareholders meeting last week and protesters both inside and outside the meeting were there. The protest, which was organized by the Michigan Coalition for Human Rights, called attention to the fact that the GM plant in Columbia regularly fires workers without compensation who have been injured on the job. We have previously reported about this practice at the board with a GM plant back in 2016 two years ago. Joining me now to talk about the protest and the situation of Colombian workers is Frank Hammer. Frank is a retired auto worker from Detroit, UAW union member and continues to work as a labor activist. He recently returned from a fact-finding trip in Colombia. I should also mention Frank is on The Real News board of directors. Good to have you back, Frank.

FRANK HAMMER: It’s great to be with you.

GREG WILPERT: So, let’s start with the GM protest at the GM shareholders meeting in Detroit last week. Tell us more about what happened, what people hope to achieve and who was there.

FRANK HAMMER: So, we’ve we’ve been to- we being the activists, were part of the Solidarity Network on behalf of the GM workers in Colombia. We have been to two prior shareholders meetings, have addressed Mary Barra, the CEO of General Motors directly. And of course, GM has not deviated from its practices in Colombia. There have been more workers in the interim that have been fired who are injured on the job. So, this time we went with the intention of delivering the results of our investigation in Bogota. We were there in April, there were six of us that were sponsored by the Michigan Coalition for Human Rights. We met with a number of workers ranging in years of service from twenty-two years to ten, both male workers and a female, each reporting on the circumstances of their firings and the injuries that they sustained at work. And we also had an opportunity to talk with their lawyer, who gave us a three hundred page legal brief to bring back to the states.

GREG WILPERT: Oh, wow. Now, so but then, let’s focus, let’s turn to the issue of what specifically happened, or what you observed rather, in Colombia. You said you met with various workers there. What kinds of situations did you find with regard to the firings and the injuries?

FRANK HAMMER: So, the refrain is all too similar to what happened to the workers back in 2011 who initiated the tent emcampent at the U.S. embassy. The injuries are very similar. Spinal column, you know herniated disks, shoulder injuries, injuries to the wrist, those kind of things. And these are really rather well documented in the attorney’s brief in regards to the workers that we had met with at the tent encampments. And the practice is that once the company knows about these injuries, that they dismiss them from the factory in advance of being able to declare that these are work related injuries. The difference this time has been that the attorney has been very successful in taking these matters to court.

There were forty workers there were injured or injured and fired in 2016. And she took on the case of twenty-four of them and actually won the reinstatement of all twenty-four that GM was compelled to reinstate, bring back to work. Of those twenty-four, GM refired twelve of them, and those are some of the ones that we met with in Bogota. And now, so the lawyer appealed the firings and it got so ridiculous about GM’s position that one of the judges actually fined General Motors for refusing to reinstate these twelve, and in addition to that actually issued a jail sentence for the executive that’s responsible for the plans to a three day jail sentence. That’s an unusual, unheard of.

Of course, the fine wasn’t paid, and of course the time hasn’t been served, because GM was able to superimpose its will over this particular judge. And so, the case is now going up and there’s a contest between the Constitutional Court and another Supreme Court in regards to the destiny of these twelve workers. So, the attorney has informed us that her success would not be possible were it not for the encampment at the U.S. Embassy and the international solidarity that the encampment has received. So, it’s really put more of a spotlight on what’s going on with regard to GM workers, and that speaks to her success in the court room. But we have twelve workers that are still discharged.

GREG WILPERT: Well, it certainly sounds like of the international solidarity action is having an important effect, I mean especially considering the fact that thousands of labor leaders and organizers have been killed in Colombia over the past twenty-five years, and usually with the Government’s silent approval, basically, which was of course one of the reasons why there was some conflict about whether or not a free trade agreement would be passed back in the Obama administration. Eventually it was passed. So, but what do you expect now from the new government? We know now, last week a new right-wing government, the president- Ivan Duque was elected president, and I guess Gustavo Petro, who was for the first time, a major left candidate who had challenged him- now, what do workers in Colombia expect to happen? Perhaps could mean a backwards move in terms of the right to organize, what do you think? What are they basically expecting from the new president?

FRANK HAMMER: So, let me if I may, let me just mention one other thing of significance in regards to our findings. The Labor Ministry, upon their discharge of these forty injured workers in 2016, actually went into the plant and conducted an investigation, which is another thing that’s really changed in the landscape in Bogota and in Colombia. And actually, came out with a fine on General Motors for two hundred thousand dollars for their illegal practices and firing injured workers. And of course, needless to say, GM has not payed the fine. So, the landscape has changed in the course of the struggle by these workers at the encampment.

So, to respond to your question. So, Duque, I think is- by winning the election in Colombia, is a really foreboding, dark clouds over the Colombian landscape. He’s very connected to the former president, not Santos, but the previous president, Uribe. And Uribe was very prominent in regards to his connections with death squads. And even before the election, in the course of this year, there’s been an uptick in assassinations of social justice activists and also labor activists. So, we are turning to a Columbia that’s intensifying what his practice had been at the time that the labor- sorry, hat the free trade agreement was ushered to Congress under the Obama administration and under Clinton’s State Department. And the promise in the Free Trade Agreement was contained in something called the Labor Action Plan, which was supposed to address this horrific record in Colombia in regards to the freedom of association and the freedom to organize, especially in labor unions.

And what’s become apparent, and what was apparent shortly after this Labor Action Plan was negotiated as part of the free trade agreement, is that it’s a worthless piece of paper and it was really just a fig leaf to usher through the Free Trade Agreement, which in many instances has had a devastating impact, especially on the farmers in Colombia. So, I think now there’s a forboding concern about renewed attacks on progressive in Colombia, on the supporters of the other candidate, Petro, who was once the mayor of Bogota and before that with a guerrilla fighter. There is an unleashing, a bit like Trump here, of this fanatical right-wing, fascist groups, and they’re already making threats in Colombia against Petro supporters and telling them that twenty-four hours just disappear, otherwise it will be the targets of military assaults.

GREG WILPERT: So, we’re going to have to leave it there for now, but we’re going to continue to follow the situation, as we always do. I was speaking to Frank Hammer, labor activist and retired auto worker from Detroit. Thanks again, Frank, for having joined us today.

GREG WILPERT: And thank you for joining The Real News Network. Also, if you like stories such as this one, I want to remind you that we recently started our summer fundraiser and need your help to reach our goal of raising two hundred thousand dollars. Every dollar that you donate will be matched. Unlike practically all other news outlets, we do not accept support from governments or corporations. Please do what you can today.

GM Auto Workers Strike for Power and to Protect Workers