We speak with Sari Bashi about how the occupation of Gaza and the de-development policies of Israel, denies Gazan’s electricity, water and right to produce and travel, making it an unlivable place

We speak with Sari Bashi about how the occupation of Gaza and the de-development policies of Israel, denies Gazan’s electricity, water and right to produce and travel, making it an unlivable place 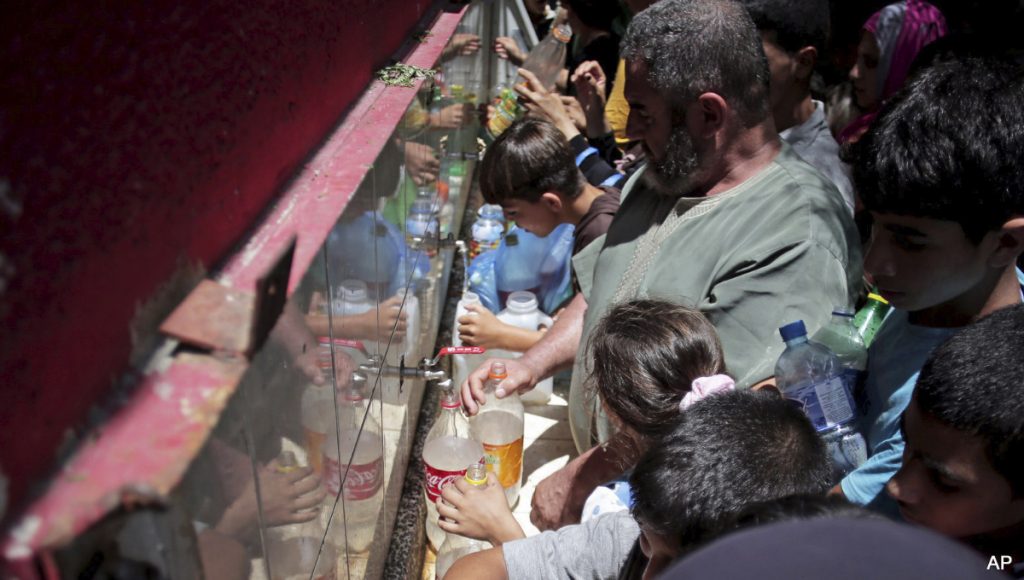 SHARMINI PERIES: Welcome back to my conversation with Sari Bashi. She’s the author of a chapter in a book, “Moment of Truth: Tackling Israel-Palestine’s Toughest Questions.” Good to have you back, Sari.

SARI BASHI: One thing to keep in mind is that the situation in Gaza is manmade. It’s not as if an earthquake has swept through it and oh my goodness, now we have to issue humanitarian relief. What is happening is that Gaza is being systematically de-developed. People are being denied the right to engage in productive work because they can’t get their goods out to markets, and they themselves are not allowed to travel or get proper inputs in order to produce. The water system, the electricity system are deteriorating rapidly because of unequal allocations of resources and bad behavior on behalf of the Israeli and Palestinian authorities.

So for example, last year the Palestinian Authority, which is supposed to purchase electricity from Israel, decided that it was going to cut for a long period of time electricity to Gaza by 30 percent. So it asked the Israeli authorities to do so, which was wrong. And then the Israeli authorities agreed to do so, which was also wrong. And people in Gaza had electricity for about four hours a day. Which is impossible in an urban, densely populated area like Gaza, where electricity is needed to climb a 10 story building, or pump water to homes, and run hospitals.

So yes, the humanitarian situation is very worrying. But it has a reason, and those reasons are human actors who need to behave differently. Some people call the crisis in Gaza a crisis of dignity, because while there is humanitarian assistance, about 70 percent of the population is receiving some form of humanitarian assistance, and people are not starving, they’re being denied the right to realize their potential. And that’s very serious.

SARI BASHI: Sure. So I’m a lawyer. And under international law, Israel, as the occupying power, is obligated to promote and protect the rights of Palestinians in Gaza and the West Bank, including the right to progressively realize their economic and social rights to progressively work toward a better future for themselves. And it also has an obligation under the law of occupation to facilitate the functioning of normal civilian life, which requires things like proper water, proper electricity, a properly functioning economy, a good medical system.

Those, those rights and those obligations are not being maintained. And the Oslo agreement is often the reason that is given. Israel will say, well, under the Oslo Accords, we entered into an agreement with the PLO to delegate those responsibilities to the Palestinian Authority. And so if the Palestinian Authority is not fulfilling those obligations it’s not our problem. So the Oslo Accords were a five-year interim accord that expired in 1999. It was never intended to be permanent. But no political accord can relieve Israel, as the occupying power, of its obligations toward people living under occupation. So Israel can sign any agreement it wants, but it has certain basic obligations so long as it chooses to continue controlling life in Gaza and the West Bank. And those obligations are not being met.

SHARMINI PERIES: All right, Sari, in light of what’s going on on the Gaza border with Israel, the right of return marches that are taking place, largely peaceful on the Palestinian side. And yet the Israeli state and the military are opening sniper fire on those protesters. What do you make of the allegations that are being made that these protests are being organized by Hamas?

SARI BASHI: Certainly Hamas is playing a role. Hamas controls Gaza. During ordinary times it prevents people from reaching the border area, demonstrators at least. Now it is not only not preventing them, in some cases it’s providing buses, and certainly facilitating those demonstrations. But those demonstrations also have a popular, organic character to them. So if you go to the area you’ll see families coming there and protesting, you know, with happenings and barbecues, and things like that. And then there also are protesters who get closer to the fence between Gaza and Israel.

So Israel has declared a zone extending up to 300 meters from the border inside Gaza to be a no-go zone. And it is shooting at demonstrators who enter that area, especially 100 meters from the border fence, even when they pose no risk to life or limb. So even, there are demonstrators who are behaving violently, there are demonstrators who are throwing stones or Molotov cocktails, or in some cases kites with explosive materials on them. But overall the only justification for lethal force is when it is strictly necessary to protect life. So if a demonstrator is is throwing a rock or Molotov cocktail in the vicinity of soldiers who are quite far away and are not risk, risking any harm by that, they may not respond using lethal force. Lethal force is a last resort when strictly necessary to protect life.

And the majority of demonstrators are indeed nonviolent, making this much more problematic. Israel has refused to release its rules of engagement publicly, but it has rejected the international standard, which is very restrictive in terms of lethal force, and instead argued that it is engaging in combat with those demonstrators, as if it were a war, and saying that it has the right to open fire on anybody who threatens the fencem which in my opinion is the wrong standard. And it explains why we’ve seen the death of 40 demonstrators. An additional 10 were killed under different circumstances, not at the demonstrations, and more than 6000 people injured. Many of them losing limbs, which is a life-changing experience.

SHARMINI PERIES: And they’re getting injured how?

SARI BASHI: Live fire. I mean, there are injuries from tear gas and other kinds of injuries. But the more serious injuries and the deaths are from live fire. So the Israeli government has indicated that for the most part the snipers are shooting at people’s legs and lower limbs. In the context of a demonstration, where people are moving around, shooting at the legs is lethal force. You just can’t control it. So the people who have been shot in the torso and in the head, I don’t know whether that was intentional or whether somebody was aiming at their legs, but it doesn’t really matter, because in most cases the standard for using live fire at all has not been met. These are people who have been quite far from the border fence and did not pose a serious risk to life or limb.