For decades, the fossil fuel industry funded climate change denial campaigns aimed toward young people to sow seeds of doubt on climate science. As the climate crisis has worsened, it has made a subtle shift to what critics call "youthwashing.".

For decades, the fossil fuel industry funded climate change denial campaigns aimed toward young people to sow seeds of doubt on climate science. As the climate crisis has worsened, it has made a subtle shift to what critics call "youthwashing.". 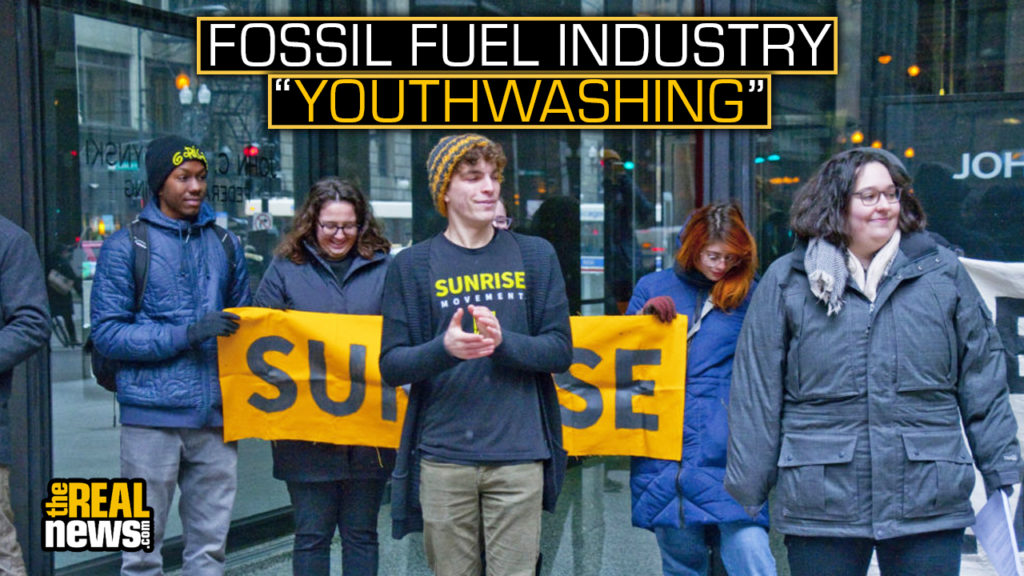 TAYLOR HEBDEN: Youth climate activism is on the rise. But as more young people push for radical climate action, big oil is ramping up efforts to channel that energy into its own ends. Youth climate activist Greta Thunberg called out these dynamics at the United Nations Climate Action Summit held this past September.

GRETA THUNBERG: This is all wrong. I shouldn’t be up here. I should be back in school on the other side of the ocean. Yet you all come to us young people for hope. How dare you? You have stolen my dreams and my childhood with your empty words.

TAYLOR HEBDEN: During a lunch hosted that same day by the industry sponsored oil and gas climate initiative, the group held a talk to “explore options for long term engagement.” And that lunch included participation by the industry-funded group Student Energy.

ALLEEN BROWN: Seems striking to me that an entity that is sort of at the forefront of what a lot of fossil fuel companies are doing which is really kind of showing themselves as proactive on climate. It was interesting that this particular organization would bring youth into that conversation.

TAYLOR HEBDEN: That was Elaine Brown of the publication The Intercept. In her recent article titled How the Fossil Fuel Industry is Attempting to Buy the Global Youth Climate Movement, Brown reported that Student Energy has its central offices in Alberta, Canada. That province is home to Canada’s tar sands, one of the dirtiest sources of oil in the world. Student Energy took more than $285,000 in corporate money from those, such as tar sands production companies Suncor and Shell, according to its most recent annual report. Brown called this a new form of youthwashing.

ALLEEN BROWN: In asking around about this and looking for more examples of washing using youth, some folks from the UK Youth Climate Coalition mentioned this term “youthwashing,” which I hadn’t heard before and which pretty perfectly summed up this trend I was starting to see.

TAYLOR HEBDEN: Student Energy was given non-voting observer status for the recently completed United Nations Climate Summit in Madrid. Oil giant BP has already stated it would fund 50 scholarships for students to attend next year’s Global Climate Summit in Glasgow, Ireland. Youthwashing is a new form of industry propaganda, but the concept of fossil fuel funded misinformation aimed at youth and in schools isn’t new.

A major early example came from the American Legislative Exchange Council or ALEC. ALEC is a right-wing corporate bill mill for state legislators, which is heavily funded by the fossil fuel industry. In 2000, ALEC passed a bill called the Environmental Literacy Improvement Act, which called for kids to learn both climate change denial and climate science as equal theories. Here’s TYT Network correspondent Desi Doyen on these bills.

DESI DOYEN: There is some uncertainty in climate science, but there is no doubt the global scientific community is pretty much united that this is happening. And the fact that they’re trying to undermine the science curriculum in these public schools is pretty dangerous. Because these kids; later on when they go to apply to colleges, when they go to apply to engineering or math or science–hey, I don’t know–it would help if they actually knew kinds of things that are going to actually help them get through to their degrees in college.

TAYLOR HEBDEN: Another group, CFACT or Committee for a Constructive Tomorrow, exists as an industry field climate denial university student network. It formally received funding from Exxon Mobile and still gets money linked to Koch industries, one of the main funders of climate disinformation in the US. CFACT denies the fact CO2 emissions cause climate change.

CFACT SPOKESPERSON: The fact that there was both higher temperatures and an ice age at a time when CO2 was 10 times higher than today fundamentally contradicts the certainty CO2 emissions are the main cause of climate change.

ALLEEN BROWN: So all of these corporations have been behind major fossil fuel industry projects that Indigenous-led coalitions have protested against. And regardless of the content of the conference itself, again, it was striking to me that these very corporations would seek out a conference that was branded as sustainable and also branded as youth and Indigenous.