Paul Volcker had a historic role in shaping the US economy over several decades, but increasingly he has been warning about an out of control financial sector that is dominating US society. Former financial regulator Bill Black discusses Volcker's views

Paul Volcker had a historic role in shaping the US economy over several decades, but increasingly he has been warning about an out of control financial sector that is dominating US society. Former financial regulator Bill Black discusses Volcker's views 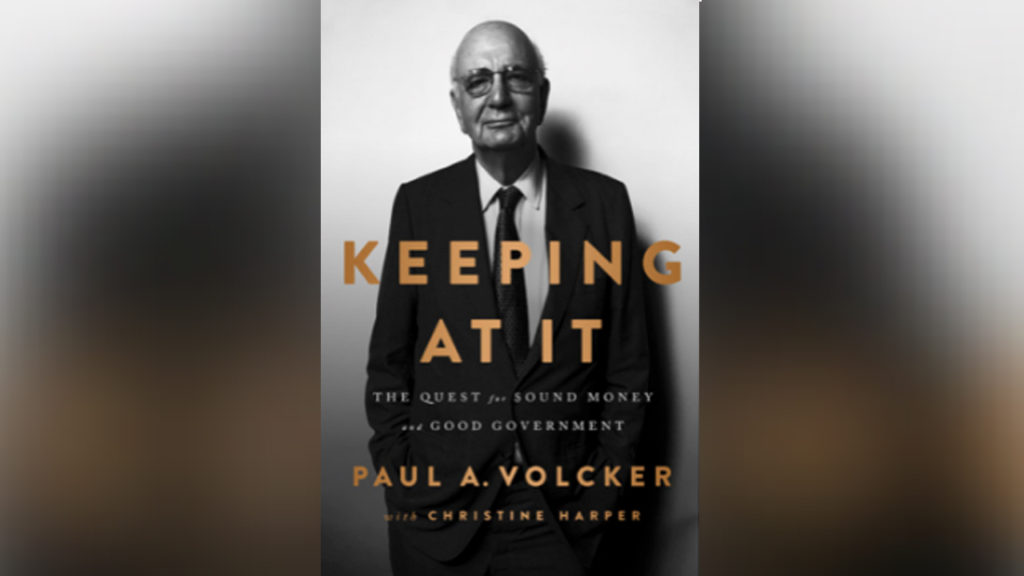 Former Federal Reserve Chairman Paul Volcker is in the news again at 91 because he’s scheduled to release his memoir next week, titled Keeping At It: The Quest for Sound Money and Good Government. Paul Volcker first took on an important public role as Undersecretary of the Treasury for International Monetary Affairs from 1969-74 during the Nixon administration, where he is said to have been instrumental in moving the U.S. off the gold standard in 1971. President Jimmy Carter then appointed Volcker as Federal Reserve chairman in 1979, and President Ronald Reagan reappointed him in ’83.

During his tenure at the Fed, Volcker was credited with defeating double digit inflation in the United States when the Fed raised interest rates to 20 percent and induced a very powerful recession. Much later, in 2009, Barack Obama appointed him chairman of the Economic Recovery Advisory Board. And in this capacity, he proposed a rule that would later come to be known as the Volcker Rule, which was incorporated into the Dodd Frank financial regulations.

Joining me now to discuss Paul Volcker’s approach to the economy is Bill Black. Bill is a white collar criminologist, former financial regulator and Associate Professor of Economics and Law at the University of Missouri-Kansas City. He’s also the author of the book, The Best Way to Rob a Bank Is to Own One. Thanks for joining us today, Bill.

GREG WILPERT: So, the New York Times also just conducted the extensive interview with Paul Volcker on the occasion of the publication of his memoir, and in the course of the interview, Volcker says, “the central issue is we’re developing into a plutocracy.” What do you think of this observation and in what ways have his own views helped or hindered this development?

BILL BLACK: So first, in the interest of full disclosure, one of the blurbs on my book is from Paul Volcker. So, people need to know that potential conflict. I think one of the most important things that Volcker has done is, as someone who lived among the plutocrats and was perceived by many people as acting on behalf of the plutocrats, he’s called them out. And this isn’t the first time, but clearly this is designed as his last word because he’s apparently in quite ill health and hence that moving up of the publication deadline to try to make sure that it comes out while he’s still alive. And he is saying at least three powerful things about the plutocrats.

One, that it is a plutocracy, that we are controlled. Our democracy is dominated by the wealthy, it operates for the benefit of the wealthy. The second thing he says is basically, nothing can stand up to the swamp as it is currently composed because people from all over who are powerful and wealthy come to Washington to try to do the wrong thing. And the third is his lament about good government. So, this is someone who’s quite serious about government, who has spent a lot of time that you don’t see visibly trying to improve the status of the government to get better people into the government and such.

When he sees those efforts as being essentially corrupted, that public policy schools these days, he says for example, are not actually functioning to produce good government folks. They are just people that like to talk about policy and that means that they get good jobs with the plutocrats and represent the plutocrats and they don’t do the hard work of actually providing good government. So, that combination of those three things is an enormous indictment of our system and a very pessimistic view about whether it is possible to fix it.

GREG WILPERT: So, as you mentioned, he himself spent a lot of time with plutocrats. Actually, he originally came from the financial sector himself like most Fed chairs. But he began to take a more critical approach, as you’ve mentioned, especially already during his tenure in the Obama administration when he proposed the Volcker Rule, which was supposed to prevent banks from speculating with their own money. How important was this rule and what role did he play and what has happened to that since?

But Paul Volcker quite quickly, when Ed Gray, the chairman of the federal agency regulating savings and loans, had his road to Damascus conversion. He had been a very conservative Republican, super Reaganite, and started reregulating the industry. And our only ally was Paul Volcker and Paul Volcker paid a cost for that. That was part of the reason why President Reagan did not reappoint him to a third term even though conservative Republicans would have been highly supportive of that.

So, to bring it up to the Volcker Rule, the Volcker rule it will not prove to be terribly important because A, it was already undercut by Timothy Geithner back under the Obama administration in every possible way. It was a rule that ended up, because of the big super big banks, the Volcker Rule really bites only as to five banks. But those five banks were sufficiently powerful to largely eviscerate the rule under Geithner and to make it extraordinarily complex. It’s not the regulators pushing the complexity, it’s the big five banks. And now they will use that complexity and the fact that it has so many loopholes as the excuse for killing it entirely under the Trump administration, or at least putting so many loopholes in it that it will have absolutely no effectiveness.

GREG WILPERT: Another point that that Volcker makes in that New York Times article that I mentioned earlier is that he says, “Everybody talks about monetary policy, but the lesson of all this is we need better, stronger supervisory powers.” What are your thoughts on this? Is he correct on this?

BILL BLACK: I think he’s absolutely correct in that. And indeed, he is way ahead of the overwhelming bulk of economists. In particular, he is way ahead of the economists that do, as they call it, modern macroeconomics. They are horrific in ignoring precisely Volcker’s point. And Volcker’s point is the right one. Had we had effective rules and more precisely effective supervisors who would enforce the rules, there would have been no great financial crisis, there would have been no great recession. This was the easiest crisis to prevent and we didn’t have to reinvent anything.

We had already seen these fraud mechanisms in the savings and loan debacle, we already knew how to defeat these fraud mechanisms. It’s simply that Volcker’s successor, Alan Greenspan, refused to use that supervisory authority, which the Federal Reserve uniquely had, to prevent liar’s loans. And then even Bernanke, his successor, refused to use that authority until effectively two and a half years after non-prime loans had died in the marketplace. And that was a matter of ideology. Volcker, as I said, got this, this key role of supervision to prevent crisis back in 1984. So, he’s decades ahead of where the economists are even today.

GREG WILPERT: Yeah, it seems to me that he certainly played a very important role in that regard. But there are some critics of Volcker who would argue that because when he raised the interest rates back in the early 1980s, that he does carry some of the blame for the extreme polarization of wealth. And the argument basically is something like that because a recession was induced, actually the worst since the 1930s, that this broke the back of the union movement, combined with Ronald Reagan’s crackdown on the unions, of course. Because they were in a weakened position, he was able to crack down on them and basically broke the back of the union movement in the United States. And therefore, they weren’t able to resist all the deregulation and all of economic policy that happened in the years after that. What are your thoughts on this? Does he carry some responsibility in that regard?

BILL BLACK: I guess you could make a case. He’s actually, in his own right, one of the people supportive of unions in truth. It is true that continued high inflation tends to be good for debtors. Those of us who owned homes, and I was old enough to be one of those people, back in that era with a fixed rate of interest were paying effectively a negative rate of interest in real terms because of inflation during that period. But that isn’t sustainable. I mean, the industry will fail under those circumstances and there’s going to be a recession. So, the idea that there was never going to be a severe recession if we just ignored inflation is, I think, also false.

GREG WILPERT: Okay. Well, we’re going to leave it there for now and we’ll probably come back to it depending on when the book comes out and what happens to Paul Volcker. I was speaking to Bill Black, Associate Professor of Economics and Law at the University of Missouri-Kansas City. Thanks again, Bill, for having joined us today.