The Potomac Pipeline is set to route fracked gas through Maryland. Katlyn Schmitt of Waterkeepers Chesapeake tells Dharna Noor why her group and others are demanding federal regulators reconsider permitting its construction

The Potomac Pipeline is set to route fracked gas through Maryland. Katlyn Schmitt of Waterkeepers Chesapeake tells Dharna Noor why her group and others are demanding federal regulators reconsider permitting its construction 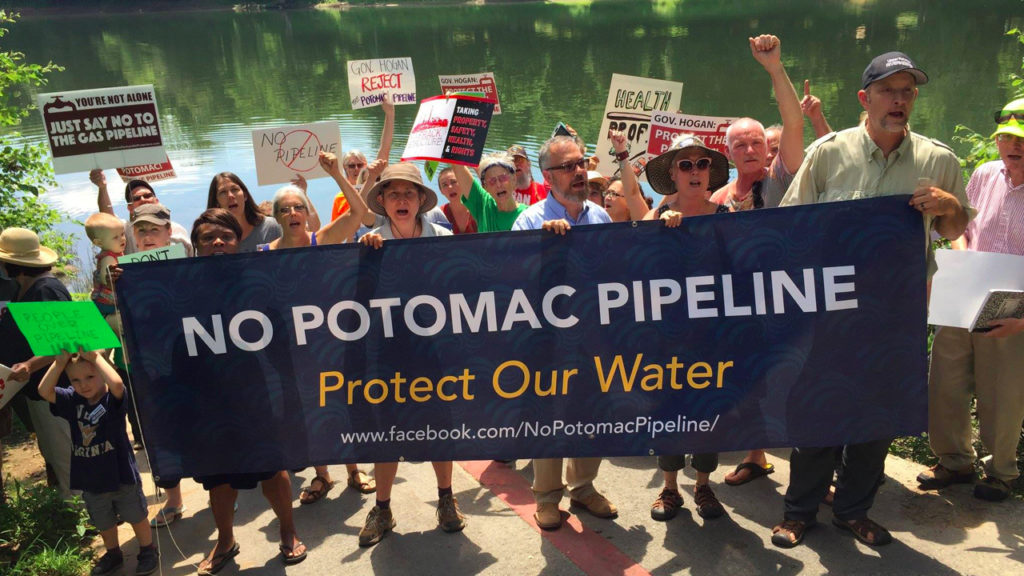 Environmentalists are outraged over plans to construct a new fracked gas pipeline beneath the Potomac River. It’s called the Eastern Panhandle Expansion Project, also known as the Potomac pipeline, and it’s set to be built by TransCanada, who are known for another controversial pipeline, the Keystone XL. The Federal Energy Regulatory Commission, who are appointed by Trump, greenlighted this project. Groups are now demanding that the FERC conduct a new hearing. They say it’s dangerous because it could explode, and it will leak methane, which will contribute to global climate change. Maryland Governor Larry Hogan signed a fracking ban last year in 2017, but he’s backed this pipeline’s construction.

Now joining me to talk about this is a representative from one of the groups fighting this pipeline. Katlyn Schmitt is a staff attorney at Waterkeepers Chesapeake. Thanks for joining me.

KATLYN SCHMITT: Thank you for having me.

DHARNA NOOR: So I wanted to get your response, first of all, to this video that TransCanada made about this project.

TRANSCANADA VIDEO: HDD is a trenchless method of installing pipelines underneath water bodies, roads, railways, buildings, and other structures. It is an environmentally friendly method used to cross sensitive areas that significantly reduces impact to the land above the drilling site and surrounding communities.

DHARNA NOOR: So again, here TransCanada is claiming that this is a safe method of drilling because it’s trenchless. They even say that it’s environmentally friendly. What do you say to this? Why do you think that they’re wrong?

DHARNA NOOR: And in addition to that, I know that your organization says that the Potomac pipeline would run through sensitive karst geology underneath the Potomac River, making it more likely that a leak or an explosion could happen during and after construction. What exactly is karst geology, and what dangers does that pose?

KATLYN SCHMITT: Sure. So there are areas where the pipeline would be drilled, and it would be drilled through karst geology. This is sensitive rock, essentially. It’s sandy, porous rock that easily breaks down. So the method of drilling through this type of rock is more prone to leaks and failures, and leading to groundwater drinking pollution, and other harms.

DHARNA NOOR: And the FERC issued this permit in July for this pipeline, despite two commissioners raising concerns about the pipeline’s contribution to climate change. Talk about this permit. How significant is it in deciding whether or not the Potomac pipeline will actually be constructed?

KATLYN SCHMITT: It’s one of the, actually, the major federal approval needed for this pipeline to move forward. So it is, it is fairly significant. And it’s required under the National Environmental Policy Act that the Potomac pipeline receive this permit to move forward.

So in terms of climate change impacts, really the FERC failed to adequately consider indirect upstream and downstream greenhouse gas emissions that the potomac pipeline would cause. But it also failed to consider the indirect effects from greenhouse gas emissions that would result from increased production of natural gas that the area would need to supply this pipeline. So there are a whole host of other climate change impacts that FERC failed to consider, including using this outdated global warming model to calculate the amount of methane that would be used. So I think what you’re speaking about with the commissioners highlighting these issues of FERC failing to really fully consider these climate change impacts, and we agree with them.

DHARNA NOOR: So before we began this interview, I reached out to Secretary Ben Grumbles, he’s the secretary of the Maryland Department of the Environment, who sent me this statement. I just want to get your thoughts on this.

So he said: Earlier this year, after a year of robust public review of the proposed project, Maryland issued a stringent permit that includes customized conditions specific to the project and its location to ensure protection of public health and the environment. While the project requires FERC’s approval to move forward, Maryland stands ready to enforce a strong and balanced permit that includes nearly two dozen environmental conditions while also recognizing that natural gas has a role in meeting state and regional energy needs.

So that all sounds pretty good. What’s your response to this?

KATLYN SCHMITT: The standards that they’ve put in this permit approval are fairly standard, sort of business as usual. And similar to FERC, they really failed to take into account the full, cumulative impacts from this project. So for instance, this project would be connecting to another pipeline that’s being built in West Virginia. That’s a 23-mile long pipeline. So they did not even consider the impacts that arise from that project in terms of quality, and in terms of climate change, as well.

DHARNA NOOR: And Maryland’s Republican Governor Larry Hogan, who’s up for re-election in November, as I mentioned before, signed a fracking ban last year in 2017. But he and his MDE, Maryland Department of the Environment, gave this pipeline a green light, and some are saying that it’s hypocritical to ban fracking while allowing fracked gas to be shipped through the state. What’s your response to that?

KATLYN SCHMITT: Yeah. You know, we completely agree that, you know, back in 2017, that we banned fracking in the state. Yet Governor Hogan is allowing it to travel under the Potomac River, which is a drinking water resource for millions of people. So we think that Marylanders were clear that they didn’t want fracking, so why should we allow fracked gas to come through the state and bring along all the harms that can come along with that?

DHARNA NOOR: And if the FERC doesn’t grant a new hearing, is there some other way that this pipeline’s construction could be stopped?

KATLYN SCHMITT: Yeah, there are still a few permits, actually, that still need to be given to Columbia to move forward with this pipeline. So there’s actually two right now related to different right of ways that the company needs to obtain. So Governor Hogan or the next governor has the opportunity to really step in here and deny those permits, in consideration of the catastrophic impacts that could result from this pipeline. More than that, next year in 2019 we’re considering legislation that would require the state of Maryland to take a more stringent look at these types of projects, and consider those cumulative upstream and climate change impacts that they failed to consider with this pipeline.

DHARNA NOOR: So you’re looking ahead even to 2019. And Democratic gubernatorial Ben Jealous said in a statement, quote: The Potomac pipeline is a threat to clean air, clean water, and our public health, and Larry Hogan has shown himself to be a threat to Maryland working families.

Come November, will the winner of the gubernatorial race be able to do anything about the construction of this pipeline? Or will it be too late? What steps could they take to combat the expansion of fracked natural gas and other fossil fuel infrastructure?

KATLYN SCHMITT: Yes. So in terms of whether those permits had been, those outstanding permits had been approved or not, they would have the opportunity to work with state agencies and making sure that those permits are either denied or taken into full consideration. And furthermore, they could support that type of legislation in 2019. That would really require the state to take a hard look at the impacts from these types of projects.

DHARNA NOOR: And are you expecting that the FERC will grant your request for rehearing?

KATLYN SCHMITT: Unfortunately, we do not expect them to grant the request. And that is because in the majority of cases they do not grant these types of requests. However, if they do deny our request for a hearing, we will be bringing action in federal court, and that will open the doors for us to do so.

DHARNA NOOR: OK, well, please keep us in the loop as you move forward. Katlyn, thanks so much for coming on today.

KATLYN SCHMITT: Great. Thank you so much for having me.