President Nayyib Bukele tried to intimidate lawmakers into approving his national security plan, which is supposed to bring down El Salvador's sky-high crime rate. But the law and order plan follows US dictates and doesn't address real causes of crime.

President Nayyib Bukele tried to intimidate lawmakers into approving his national security plan, which is supposed to bring down El Salvador's sky-high crime rate. But the law and order plan follows US dictates and doesn't address real causes of crime. 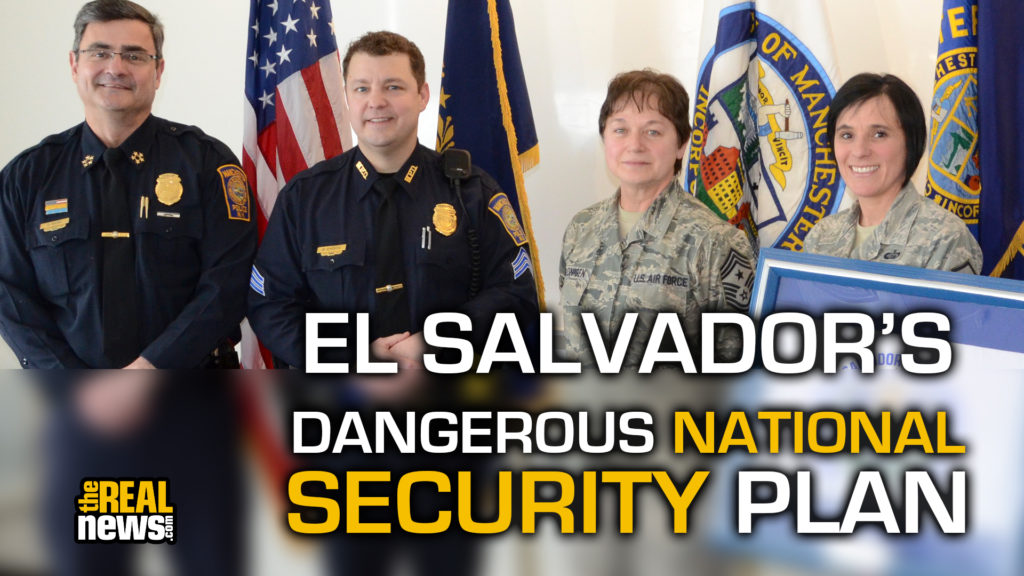 El Salvador’s President Nayib Bukele caused outrage last Sunday when he deployed the military and police to occupy and threaten El Salvador’s legislature, the National Assembly. The motive behind Bukele’s militarization of the assembly is that he wanted to pressure the legislature into approving a $109 million loan for his national security plan. The plan intends to modernize El Salvador’s police and armed forces with advanced technology. Even right-wing National Assembly deputies from the ARENA party objected to Bukele’s action. National Assembly President Mario Ponce called it a coup attempt.

Ever since the 1992 peace agreement between the government and the left-wing rebel movement, FMLN, El Salvador’s military is strictly prohibited from becoming involved in the country’s internal affairs. Even though the police and military have since withdrawn from the legislature, Bukele continued to issue threats against the National Assembly and its members.

Nayib Bukele once was a mayor of San Salvador for the FMLN, but the party expelled him in 2017. He went on to win the presidency last year and took office in June on an anti-corruption and anti-crime platform. Since then, he has repeatedly sided with the Trump administration on issues involving immigration and regional security.

Joining me now to analyze the current situation in El Salvador is Yesenia Portillo. She is an organizer with the Committee in Solidarity with the People of El Salvador, CISPES and joins us from Washington, D.C. Thanks for being here today, Yesenia.

Yesenia Portill…: Thank you for having me.

Greg Wilpert: So let’s start with some more details about what happened last weekend when the military and police took over the National Assembly. What were they hoping to achieve exactly and why did the action cause so much outrage even among the right, even though Bukele himself has been governing from the right?

Yesenia Portill…: Nayib Bukele’s stated purpose for calling for an insurrection actually also and for bringing out the military to governmental offices was to pressure the National Assembly to approve the requested loan that you mentioned. I think ulterior motives that have been pointed to by political analysts in El Salvador and social movement leaders in El Salvador has been that he’s deflecting and trying to turn attention away from criticisms that are being made against his administration for their inability to … Particularly, there was a situation in weeks prior where a lot of neighborhoods in the capital were experiencing inadequate water administration and there was like brown water coming out of their taps. So there’s been some folks that are linking kind of this situation to the questioning of his administration for his handling of that situation with water.

Greg Wilpert: I want to take a closer look at the security plan that Bukele had proposed. What is it exactly about and why is it so controversial?

Yesenia Portill…: Yes. So the security plan, this is a second loan that he’s requesting. He had already previously requested $90 million for his second phase of the security plan and is now requesting another $100 million. And in addition to these loans that he’s requesting, which amount to $200 million that are both currently being debated and analyzed and negotiated by the Legislative Assembly, which is the body that the Constitution sets out has the authority to approve such loan requests coming from the executive, in addition to those loans, his budget for this year also increased the military and security budget by an additional $200 million from the previous year. So that budget totals 750 million without these loans and that’s a $200 million increase. And so, we’re looking at $400 million increase with these loans if they get approved.

And I guess the question is if they’re controversial, if the security plan is controversial, what it is is at this point somewhat unclear and it is not necessarily something that’s a divergence from the way in which previous administrations have addressed crime and security in El Salvador. It’s not what they call mano dura policies or policies that are very punitive that rely heavily on the militarization of police and policing heavily and surveilling heavily of communities. These things are not new. These are things that in the past, previous administrations have used usually with a lot of pressure from the US government actually.

The US government has historically spent a lot of money in the region to supposedly address crime and violence there through drug war policies. So like the Central American Security Initiative and the Alliance for Prosperity are both sources of funding that require or that heavily incentivize punitive measures and militarization and criminalization of marginalized communities as a response to crime and violence. And his plan is not, like I said, it’s not a divergence from that. It’s just an exacerbation.

So for this third phase that he’s asking for the $109 million for, yeah, there’s not a lot of transparency. There’s a lack of information actually is what the social movements are denouncing. And as far as what the public has access to, it’s even less. I don’t know if the Legislative Assembly, the commission that’s currently debating it might have a little bit more, but as far as what the public knows, it’s very, very minimal. But it includes thousands of security cameras, about a hundred drones and facial recognition technology.

Greg Wilpert: Bukele’s focus on crime is, of course, connected to a very real issue, which is that crime is very high in El Salvador. Now, just last week, Human Rights Watch released a report about how at least 138 Salvadorans who the United States deported back to El Salvador were murdered upon their return. And Doctors Without Borders also released a similar report this week. Now the US is sending so many Central American refugees to their death by deporting them is a serious issue of its own of course. But why is crime actually so bad in El Salvador in the first place, that is, and do others such as the FMLN offer a different solution than just modernizing the country’s military and police?

Yesenia Portill…: Yeah, I mean I think that the findings from the Human Rights Watch report point to, as you said, like a condemnation of the ways in which the US government has responded to migrants fleeing from the region. So the report goes back to 2013, so this covers a time period when the Obama administration was instituting policies of deterrence and including militarization of the Mexican-Southern border and bringing family separation as a part of immigration policy in the US as a way to deter migrants from fleeing. And so, what the Human Rights Watch report really shows us is that migrants are fleeing very legitimate threats to their lives. And, of course, Trump’s increasing attacks against asylum seekers, again, it’s a condemnation of all of these things that deportees are being sent back to their deaths.

And I think, so your question about what have been the responses from previous administrations, as I was saying earlier, the US has played a major role in shaping the ways in which violence and security is addressed in El Salvador specifically, and the FMLN was hard pressed to find funding for alternative solutions to the issue, holistic integral solutions to the issue. And they were pressured and encouraged to take money for militarization, surveillance and these kinds of punitive measures. They were able to implement some increases in spending for rehabilitation and social programs more generally. Under the FMLN, the country saw increase in social spending that was historic. And so, they had the view that the way to address the crime and violence in the country has to include an addressing of the mass inequality that exists.

And so, yeah, I think that it’s really important to understand that the United States has been playing a major role, not just in El Salvador, but in Guatemala and Honduras and just in the region in shaping this reality of violence and security. They’ve been spending hundreds of millions of dollars for at least a decade on drug war policies. And so what has that really led us to?

And yeah, and then the other thing is that even under the FMLN, through the kind of security policies that were being championed by the Alliance for Prosperity and CARSI, and these things lead to abuses by the state. And so, there were many reports of extra judicial killings by police that had been trained by the United States. And so, this is the same police force that still exists today and that Bukele is trying to get more money and funding for. And the human rights report indicates that some of these victims were victims of the state.

Yesenia Portill…: Thank you so much.