Angela Joya discusses the return of demonstrations in Egypt against President Al-Sisi. After thousands were arrested and police brutality was unleashed at the protesters, the demonstrations only grow larger.

Angela Joya discusses the return of demonstrations in Egypt against President Al-Sisi. After thousands were arrested and police brutality was unleashed at the protesters, the demonstrations only grow larger. 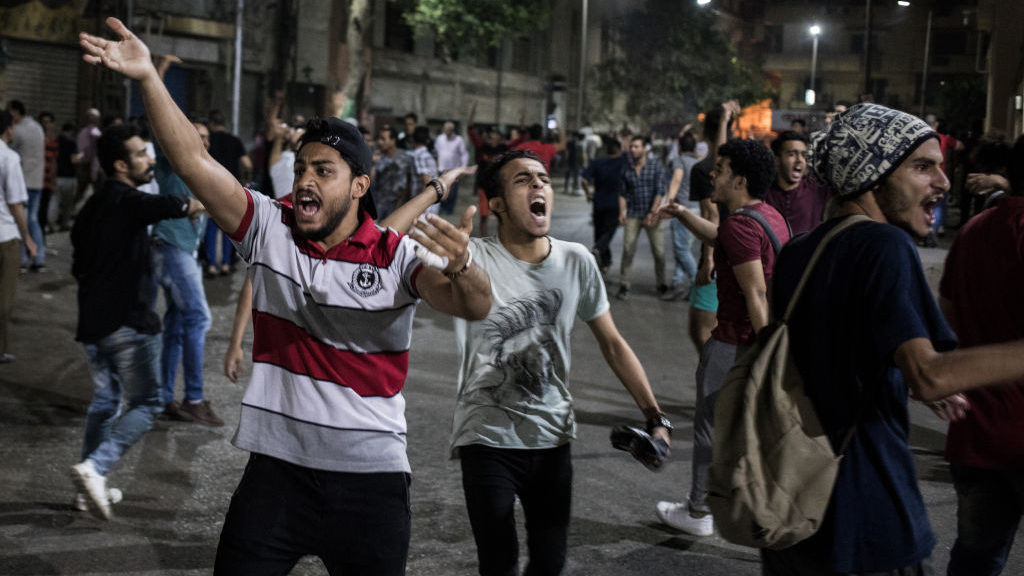 Masked men, riot police, and other forms of state repression are currently being used against protests in Egypt, but the protests continue and are entering their second week. It actually looks like the repression of the protests is only fueling them. The person who is said to have launched this latest wave of protest, Mohamed Ali, who is based in Spain, called on protesters to gather not only in Tahrir Square in Cairo, but also at the Pyramids of Gaza, among other locations.

With thousands arrested by the police and an unknown number of protesters injured or perhaps even killed, authorities demand that hospitals provide information on the injured protestors that are receiving treatment so that they can be arrested in the hospitals. Also, Alaa Abd El-Fattah, who was one of the leading symbols of the 2011 Tahrir revolution, was recently arrested. On Friday, thousands participated in a demonstration in support of President el-Sisi. El-Sisi himself attended the demonstration and responded to accusations of corruption made by the demonstrators against him.

GREG WILPERT: Joining me now to discuss the ongoing wave of protests in Egypt is Angela Joya. She teaches in the Department of International Studies at the University of Oregon and joins us today from Doha, Qatar. Her most recent book is The Roots of Revolt: A Political Economy of Egypt from Nasser to Mubarak. Thanks for joining us again, Angela.

GREG WILPERT: So when we had you on last week, the demonstrations were only beginning. At the time, you said that they were smaller than the mass protests of 2011. Now, despite the smaller size, the police are not able to stop them so far, and the protests continue to spread, it seems. So what is fueling them?

ANGELA JOYA: Well, I guess, first of all, the protests, we expected them maybe to be a bit bigger, but they are not as big as we expected, because the police blocked all the main thoroughfares and avenues to Tahrir Square in Egypt. So they physically prevented people from coming. But nonetheless, we saw a sporadic number of people showing up in different parts of Cairo protesting. But I guess more importantly, in smaller towns outside of Cairo, in other provinces, there were protests where the police presence is not as heavy and the police focus was mostly concentrated inside Cairo.

They continue coming, I have to say, because the conditions that people are experiencing are not necessarily ideal. Talking to Egyptians, reading mostly about their daily lives–as I mentioned in the last batch of interviews–the conditions of austerity are quite harsh on a lot of Egyptians. 40 million Egyptians are suffering from basically poverty-level life conditions. Cost of living has gone dramatically high. People cannot access daily necessities. And so, we see the pressure mostly now even on the middle class, which previously did not suffer to the same extent. And so they are now also experiencing what majority of the working class Egyptians have experienced in the last 10 years or so since the uprisings initially began in Egypt.

GREG WILPERT: Now, strangely enough, the Egyptian Stock Exchange increased quite suddenly, presumably a response to the Central Bank having cut interest rates by 100 basis points on Thursday last week. Now, how do you explain the rising stocks with the protests continuing on in the streets?

ANGELA JOYA: Well, I have to admit that over the last 15 years or so that I have been studying Egypt, somehow there is a disconnect between the reality of lives of people, the harsh reality they experience, and the reality of the stock markets and how they keep rising, because there’s a trust that the more repressive the regime becomes, the harsher they suppress protests, the markets tend to respond more positively. And so, in some ways, the nature of capitalist development in the Middle East and North Africa, in these perverse ways, we see celebration by investors the more they see repression by the state. And in my book, I discuss this as the rise of neoliberal authoritarianism, where you see the support and expansion of capitalist markets under the auspices of a regime that is really successful at crushing protests or public demands for rights and social justice.

GREG WILPERT: Now, another interesting development is that the city of Suez became one of the more prominent centers of the protests over the past week. Why Suez?

ANGELA JOYA: So Suez has historically been very impoverished and left out of government subsidies or government social services. And I also look at Sinai; for instance, North and South Sinai. These are governorates where poverty rates are much higher, and the government doesn’t necessarily pay attention. We have to also say that most of the attention of the government when it comes to subsidies or social services, it’s focused on major mega cities like Cairo and Alexandria, where they fear that a mass uprising could occur, and that could stabilize the government. So the neglect of these other smaller cities has been a part of the Egyptian recent history.

So that’s one factor that they are coming out. I don’t want to necessarily feed into what the government discourse has been, that places like Suez might have a number of supporters of Muslim Brotherhood who might be coming out. But it’s possible that there’s also sympathizers of Muslim Brotherhood in these smaller towns who feel more confident that, with the absence of security forces, their heavy presence in these smaller towns, they can actually come out and protest. We have to remember that when Mohamed Morsi was overthrown, in the memory of modern Egypt, of contemporary Egypt, there is still this grievance, deep grievance that the only democratically elected government was overthrown by a coup by the military. And so, a majority of Egyptians who did support Morsi, they are still quite upset about that. They still hold that as their only democratic election and their only democratic president.

GREG WILPERT: Now, what do you think is the more likely outcome at this moment if these protests continue, and continue to grow, perhaps?

ANGELA JOYA: I would say… I mean, based on the recent news coming out of Egypt, the government has arrested now over 2,000 protestors and activists. As you mentioned in the initial part of this interview, Alaa Abd El-Fattah, who had been arrested in the first part of the revolutions in early 2011, has been arrested again. He spent five years in jail and now they’ve taken him again into custody. So there is a bit of a clean sweep by the government going after any potential suspect that might stir protest in Egypt, and they’re trying to quash that. They’re trying to prevent that, any possibility of such a mass uprising that could take place.

So I am not so sure that we would see such a big level of uprising in Egypt as we did in 2011, but we might see these kinds of sporadic outbursts of anger on the street from time to time. One thing is for sure, that with these recent accusations by Mohamed Ali, this military contractor, and the way that Abdel Fattah el-Sisi responded, it has definitely destabilized the trust that Abdel Fattah el-Sisi had with the Egyptians. And so, that tarnished image of him now and the trust that he had built, I think that is also going to fracture the kind of consensus that this government had built since 2014 that he’s been in power.

GREG WILPERT: Okay. Well, we’re going to have to leave it there for now, but we’ll continue to follow these developments in Egypt. I was speaking to Angela Joya, Professor of International Studies at the University of Oregon. Thanks again, Angela, for having joined us today.

SPEAKER: Thanks a lot for watching. Appreciate it. But do us one more solid favor. Hit the subscribe button below. You know you want to. Stay up on our videos.