The recent wave of protests against Egypt's President El-Sisi were sparked by anger at corruption, but also because of the growing inequality in Egypt, says Prof. Angela Joya.

The recent wave of protests against Egypt's President El-Sisi were sparked by anger at corruption, but also because of the growing inequality in Egypt, says Prof. Angela Joya. 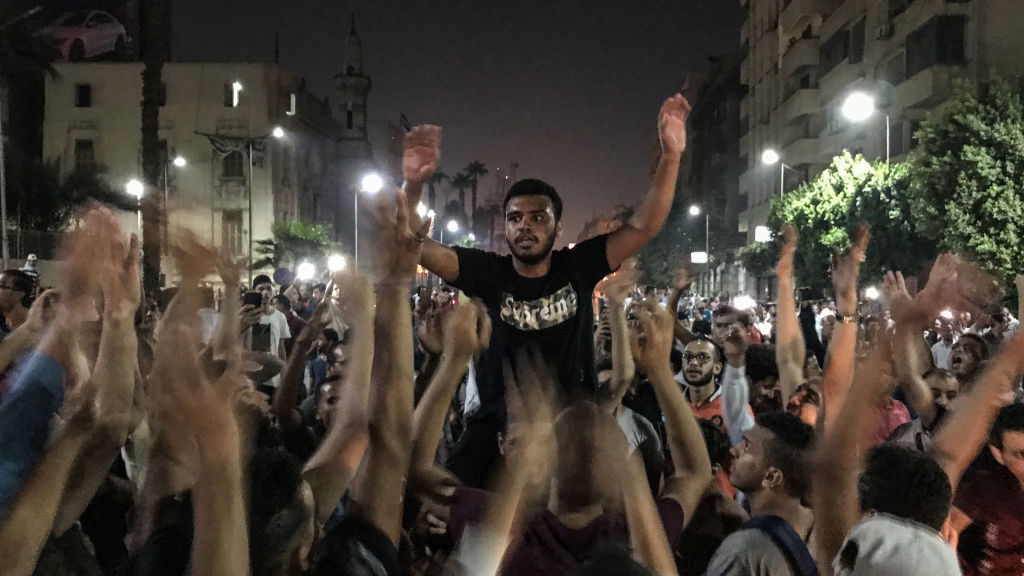 Over the weekend, in the middle of the night, thousands of Egyptians took to the streets in Tahrir Square, Cairo and were soon joined by other protestors in other cities all across Egypt. It all started when Mohamed Ali, a former actor and contractor for the Egyptian government who was living in Spain, recorded a video and spread it on Facebook, calling on Egyptians to protest against the SAC government.

MOHAMED ALI: I’m still waiting for a response from the Defense Minister and Security Forces saying that el-Sisi is out. He is no longer fit for office. Next Friday is his ultimatum; I am waiting for their decision. The next step is a multi-million man march. We started in our local streets, but next Friday we will take to the major squares.

GREG WILPERT: Ali accused el-Sisi of corruption and of using public funds to build palaces for himself. The police responded to the protest by repressing them, arresting about 500 people. Human rights lawyers say they cannot handle so many cases of all the demonstrators who were arrested. Also, the Egyptian government made use of Interpol to issue arrest warrants and go after expat Egyptians, such as Mohamed Ali himself, in order to silence them.

Joining me now to discuss the recent wave of protests in Egypt is Angela Joya. She teaches in the Department of International Studies at the University of Oregon; and focuses on neoliberal globalization and has studied the North African Arab uprisings closely. Her most recent book which is forthcoming is called, The Roots of Revolt: A Political Economy of Egypt From Nasser to Mubarak. Thanks for joining us today, Angela.

ANGELA JOYA: Thanks for having me.

GREG WILPERT: Would you say that these protests are mostly motivated by anger against el-Sisi’s corruption, which is what Mohamed Ali talks about in his videos, or are there other issues such as the economic situation that some have suggested?

ANGELA JOYA: I don’t know if we can separate the two. How Egyptians talk about corruption has a lot to do with the reflection of their life circumstances. In the past three years, Egypt has gone through a massive shift in their economy as a result of an international monetary fund deal that the Egyptian government under Abdel Fattah el-Sisi signed. So implementing the reforms that were suggested by the IMF has taken a massive toll on the lives of ordinary Egyptians. The government itself issued its own statistic suggesting that between 2015 and 2018, four million additional Egyptians have fallen below poverty levels of $1.40 a day. That’s the broader context within which these accusations of corruption is resulting in these kind of mass protests in Egypt.

GREG WILPERT: Mohamed Ali himself doesn’t even live in Egypt, but in Spain. So how is it that he’s become such an important figure in terms of kicking off these protests?

ANGELA JOYA: I’m not so sure how it is that particularly his message has come out, but there is something… I guess as a result of other individuals who have come out, who have complained about the government, I get the sense that there is a deep rift that’s developing between the various branches of the military itself that’s happened under el-Sisi’s rule since 2014 up to now. Mohamed Ali is not the only one who has come out. Many others after him, claiming that they’re a part of the Intelligence Services and part of the military, have come out supporting and confirming what Mohamed Ali has said, but also adding more information or more accusations of corruption by the military.

Over the last couple of years, the branch of the military that el-Sisi belongs to, the Military Intelligence Services, emerged as quite powerful. They actually retired forcefully 95 officers of the other branch of the Intelligence Services. So it seems there is some rift developing there that is also reflected in the accounts of other Intelligence Service officers who are coming out complaining. But that this person’s speech has struck a chord with Egyptians… Listening to a comedian who has, in his Facebook account, come out saying that what has made Egyptians very upset: it was not so much the accusation of corruption, but it was el-Sisi’s response to these corruption charges.

Just this past Saturday, el-Sisi held an emergency student conference in Egypt with a gathering of 1600 students. He took the stage and started the conference by saying that he’s going to respond to every accusation of Mohamed Ali. The words he used… He said actually that the military in every level warned him not to address this guy. But he decided to address him. His answer, he said that, “He has accused me of building palaces. Sure, I have built palaces, but these belong to the Egyptians. And what more? I will build more palaces.” In a way, it seems that that response was quite unexpected by the Egyptians who have looked at the military but who have also looked at el-Sisi– the majority of them–as this caretaker figure who stepped into a bit of an environment of chaos after the overthrow of Mohamed Morsi.

They did not expect him to come out and actually say yes; basically confirm that he has built palaces for his own use, but that he will continue building palaces. In a way, it was maybe a bit of a dose of reality for the Egyptians that it came from his mouth that these are true, that this kind of wealth polarization is happening; and that he, as a figure, had mobilized and united Egyptians for the past five-six years and through obviously oppressive means, not necessarily just popular policies. That seems to have been the reason why Mohamed Ali’s videos have actually gotten people onto the streets now.

GREG WILPERT: Actually, I wanted to touch on something that you mentioned a little bit earlier in your response just now, which has to do with the relationship to the military. That is, this recent wave of protests were repressed quite rapidly, it seems, compared to those that took place during the Arab Spring in 2011. Now, why is that? Is that because they were smaller or is it because el-Sisi has better control over the military than Mubarak had back in 2011?

ANGELA JOYA: Well, definitely because the numbers were much smaller. I was watching and following some of the various ones around the country, and even the ones in Tahrir were quite small. So definitely, given the size of the Security Forces and the various apparatus of the military, they can easily take control. And as you mentioned, over 600 were put in jail, arrested out of these protesters. And so, it was not as massive as the ones in Tahrir Square that overwhelmed the regime at the time. Nowhere close to that. That’s definitely a key to it. Also, I think the international response has been probably disheartening for the Egyptians, the protesters. Just recently, Abdel Fattah el-Sisi was in New York for the United Nations Conference and Trump referred to him as the “real leader.”

That kind of support came at the same time as the U.S. signing off to the regular annual amount of military aid that they give to Egypt, the $1.3 billion. That was given to Egypt in the presence of el-Sisi as well as basically a celebrating of his leadership in the country. With that kind of support from the U.S., el-Sisi feels quite confident. The Security Services just issued a warning to all journalists covering the events in Egypt, telling them to be more balanced and that they’re watching. That’s quite a bit threatening to what will be covered, how much information we will receive for what is really happening in Egypt, but also threatening to people inside Egypt who actually step out and protest. That’s the kind of broader sense that I get why they crushed them so quickly.

GREG WILPERT: I think it’s interesting that you mentioned Trump’s meeting. Before that, actually, Trump had another meeting where he referred to el-Sisi as his “favorite dictator,” which is quite revealing… I think accidentally, probably. I want to turn to the issue of… Well, you were talking about the repression of the protests and how quickly that was. I’m wondering, though, what does that mean moving forward? Do you think that the protests have been squashed, have ended? Or is the anger against el-Sisi and the government strong enough that they could burst out at any moment again?

ANGELA JOYA: I’m not so certain. Since the overthrow of Morsi, the military and then the government of the military has really ensured that they would make sure the streets are not a place for people, that they will not come out and protest. They have targeted mostly the Muslim Brotherhood and their supporters, but by doing so, they have also actively discouraged public acts of protest in the streets. It’s not surprising that we haven’t seen many protests. However, I think just looking at public protests on the streets as a measure of anger and grievances of people might be a bit misleading in numerous occasions. I mean, I follow Egypt regularly as I do other countries in the region. There are various ways that people protest, that people express anger. There are acts of protest and resistance across the country in rural areas, in urban areas, and workplaces.

Those don’t necessarily get captured by the media because of the scale of them and possibly also because of the reach of journalists to these areas. I just wanted to point that out, that because we will not see the same form of protest, it doesn’t necessarily mean protests and basically contentious acts of resistance will be stopped in the country. I’ve followed the military a bit closely these years. And what’s unprecedented is, for instance, in military factories where before you never hear of workers going on strike or workers resisting their managers, increasingly we hear of those acts in military-led factories as well.

GREG WILPERT: OK. Well, those are really interesting points that you’re making there. We’re definitely going to come back to you again as the situation there develops. We’re going to have to leave it there. I was speaking to Angela Joya, Professor of International Studies at the University of Oregon. Thanks again, Angela, for having joined us today.

ANGELA JOYA: Thanks for having me.