Shortly after the government of President Lenin Moreno announced new IMF-imposed austerity measures and price increases, protests against the government, uniting workers, students, and indigenous movement escalated in the capital of Quito this week.

Shortly after the government of President Lenin Moreno announced new IMF-imposed austerity measures and price increases, protests against the government, uniting workers, students, and indigenous movement escalated in the capital of Quito this week. 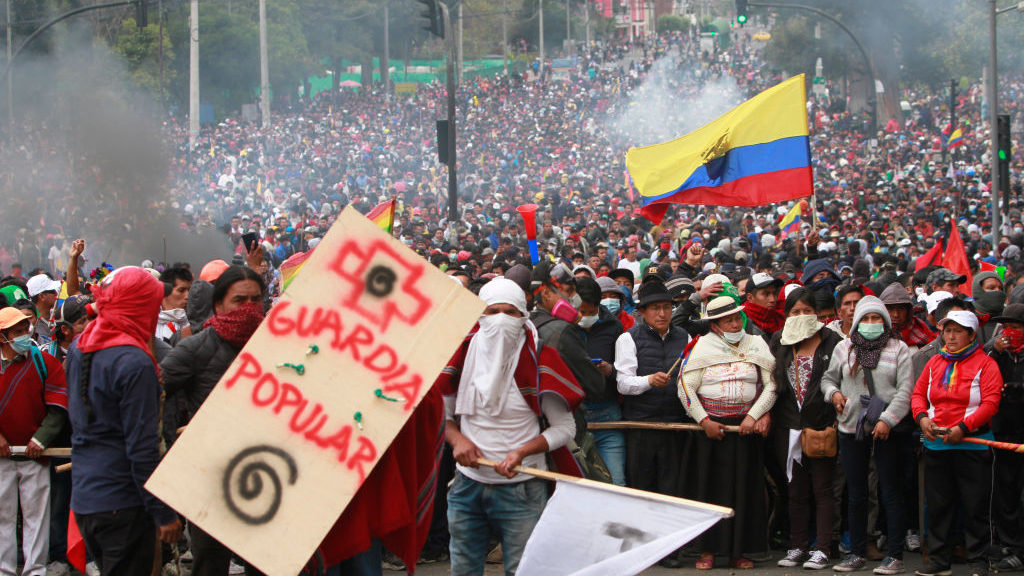 Narrator: For the fifth consecutive day of a national strike in Ecuador, citizens are protesting against austerity measures. President Moreno ordered the army into the streets and on Monday night claimed that the protests were part of a coup financed by Venezuelan President Nicolas Maduro and former Ecuadorean President Rafael Correa
Lenin Moreno, President of Ecuador:
Do you think it is a coincidence?
That Correa and members of his team
Like Hernández, Patiño and Pabón
Have traveled to Venezuela
Just few weeks ago?
Maduro, that authoritarian bastard, and Correa
Have activated their destabilization plan
Narrator: Progressively, since Sunday night, the capital was heavily militarized and soon security forces were violently enforcing a state of exception issued by President Lenin Moreno
Complying with the International Monetary Fund’s demands, in exchange for billions of dollars of loans, the measures included a rise in diesel and gasoline prices, which could double from current levels. They also contemplate a cut in some of the benefits for workers in the public sector. Musician and cultural activist David Benitez explains how this would directly affect the poorest
David Benitez, Cultural activist:
We are resisting the economic measures
Of the 833 decree
We called it the big package or ‘paquetazo’
And that’s the context of what is happening
The measures that the president has launched
directly affect the cost of living for the Ecuadorean people
and they come directly from the IMF,
They contain their letter of intentions.
We hope this is over as soon as possible,
As everyone is losing here.
Our goal is for Mr. Moreno to withdraw these policies…
these austerity measures, this ‘paquetazo’
We are not asking for him to resign,
or to escape elsewhere
We simply want him to lift these economic measures
and we hope he will do it soon.
We do not want repression.
And we want to express our solidarity
with the Indigenous people, farmers and workers
Narrator: Thousands of Indigenous people and farmers started to walk from different parts of the country towards the capital on Saturday, convinced that their agrarian labor will be directly affected in many ways by the rise of fuels. Military tanks, tear gas and more violence is how security forces were preparing for their arrival, but repression was not only reserved for them, but also for students, workers and other social movements protesting in Quito Monday afternoon.
Jordi Males, Student: We have been in this fight since Thursday, but the media is not interested in showing this chaos… These media outlets are corrupted, we have confirmed they want to cover the sun with a finger and that’s simply impossible.
Today we are realizing how many
people have come here to peacefully protest,
willing to help the people who are at the forefront,
demanding our rights.
We came here with that goal.
But actually the army and the police
have shot at the people,
they are violating all rights.
We are afraid and we are concerned
that there are many people injured.
We also thank all the organizations
that are displaying emergency protocols,
and are here supporting us.
We want the world to know….
We want everyone to acknowledge
what is happening in Ecuador.
We are witnesses of an abuse of authority by the security forces.
Narrator: Human rights organizations are also denouncing arbitrary detentions, hundreds of injured and so far one death is confirmed.
On Monday afternoon the government undertook a great effort to prevent the indigenous march from reaching the center of Quito, where the presidential palace is located. But finally they did However, the palace was empty, because President Lenin Moreno left when the protests started. And just after the indigenouns movements entered the capital he announced he will be conveniently moving the seat of government to Guayaquil.
Lenin Moreno, President of Ecuador:
Compatriots, I have traveled to Guayaquil
And I have moved the seat of government
To this beloved city
Regarding the faculties that I’m entitled to
According to the constitution
I’ve always prioritized peace and security
Of the Ecuadorean people
Before my own interests
Narrator: A second indigenous march heading to Guayaquil was also blocked by municipal trucks, but they also managed to pass, and, just as the rest of the social movements in Ecuador, they vowed to continue in the streets until the government lifts the austerity measures or leaves.