Women of color will continue to bear the brunt of and lead the resistance to unjust immigration policy, says undocumented activist and Our Revolution Political Director Erika Andiola

Women of color will continue to bear the brunt of and lead the resistance to unjust immigration policy, says undocumented activist and Our Revolution Political Director Erika Andiola 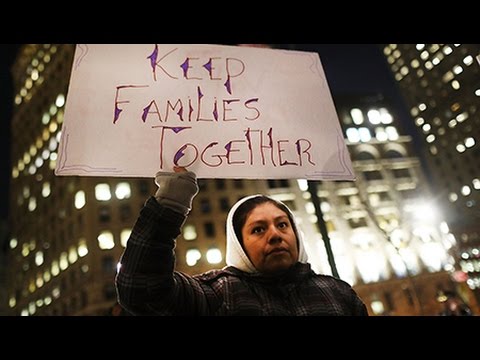 Tens of thousands of women took part in International Women’s Day, with actions in dozens of cities across the U.S. and across the globe to strike and march for social justice, gender and racial equality. This year’s International Women’s Day comes at a time of increasingly harsh immigration policies by the Trump administration, many of which are targeting and often separating women from their children.

Now joining us to discuss this, we’re joined with Erika Andiola. She is an undocumented immigration rights activist. Erika is also formerly the government relation’s director for the DREAM Action Coalition. She also served as a National Latino Outreach press secretary for the Bernie Sanders presidential campaign. She is now the political director for Our Revolution. She joins us today from Phoenix, Arizona. Erika, thank you so much for being here.

ERIKA ANDIOLA: Of course. Thank you for having me.

KIM BROWN: So, Women’s Day was an action against inequality, especially against women of color, where in the United States women of color earn usually about a fraction of what white men earn, as little as 56 cents on the dollar. So how effective do you think that Wednesday’s actions were in bringing this issue to the forefront?

ERIKA ANDIOLA: I think that this is just the beginning of an entire… we have four years of really resisting everything that Trump has been not only promising but already acting on, and of course… a one-day protest or a march or a one-day strike is not necessarily going to make all the difference. But I think it is definitely a way to empower more and more women to come out and to start getting organized. I think that it’s going to be the key –- right? –- how do we transform all this energy into getting a lot of these women, for the very time, some of them, to come out and actually do an act of resistance, to continue and stay actually organized and involved in their own communities after we do these marches and the strikes at the federal level.

KIM BROWN: Indeed. And as Donald Trump’s immigration policies have come under fire for basically escalating ICE raids and deportations, you recently questioned if we would be facing the current situation if the Obama administration’s record deportations faced similar broad outrage by Democrats and the left. Can you explain what you mean by that?

ERIKA ANDIOLA: Yeah, absolutely. I think that at some point we have gone through massive raids. Just remembering December of 2015 I was actually on the campaign trail with Bernie. We got a message that there were a couple of mass raids happening with Central American women and children that came here, basically, seeing asylum and seeking refuge. Yet they were being raided and deported by a Democratic president. We tried to respond, we tried to get a lot more people to get the President to stop doing this, but it was so much harder to do it under a Democratic president.

Now, obviously, the situation is worse …(?) the same, but it is definitely worse. But we do have a lot more awareness, right? And now it seems almost human to talk about this, now that it’s not a Democratic president. And so it is what it is, that we’re in this moment now. I really hope that we learn that this is not a partisan issue; that this is not something that Democrats are better at, but that they could be better at; that we need to learn that lesson moving forward as we try to transform this country into something we actually can survive, and not what we have right now with Donald Trump.

KIM BROWN: You know, undocumented women and children crossing together into the U.S. could be separated by U.S. authorities under a proposal being considered by the Department of Homeland Security. It was first reported by MSNBC – this move will soon have a boon for the private prison industry, such as companies like the Corrections Corporation of America, CCA. So what is your response to this? Is Donald Trump trying to prop up the private prison industry by resuming these ICE deportations and insisting on putting undocumented persons in these prisons?

ERIKA ANDIOLA: Mm-hmm. No, absolutely. I mean, this is nothing new, we have seen, again, within the last couple of years, we have seen more and more jails and prisons being expanded or being built to hold more immigrants and to hold, overall, more people of color. And I think for us, within the immigrant rights movement, I think a lot of people are realizing that this is not just an immigrant justice system that needs to be fixed, but it’s also the criminal justice system that needs to be fixed.

It’s definitely a way to profit for these companies, to get more black and brown bodies to fill these beds, and continue to receive more money – which, by the way, is money that’s coming from the federal government – which is actually coming from voters and people… not just voters, people who actually contribute through taxes.

And so it’s… I think a lot of people in the immigrant rights movement have known this and [in the] criminal justice movement has known this. Now we’re hoping that we can really get more and more Americans to understand what is behind these private prisons; how many people are actually going through separation of families that have been in detention centers for years, without having… without being a danger to our community, and that’s just not humane at all.

KIM BROWN: Let’s look at the intersection, Erika, of being an undocumented person and being a woman to boot. We know that Latina women are amongst the lowest-paid in the United States, and we know that, having been mothers and being women, they are oftentimes bearing the brunt of these very harsh immigration policies. So, paint that picture for us, how being a woman, and being an undocumented woman, in the United States, presents its own set of very unique challenges.

Right now, what we’ve seen is the massive… or, you know, we have increased… we have seen an increased rhetoric from Donald Trump about Sanctuary Cities and getting more and more police to work with ICE; and what we actually have also seen is that [this] also creates fear among women who are being victims of domestic violence, women who perhaps are not even willing to call the police on their own now, having to deal with immigration, and being a part of the police it’s even worse. And a lot of women also flee domestic violence from their own countries, come here to seek refuge, and yet, you know, we don’t look at that as a factor.

And so there’s a lot of intersectionality, and I think for us it’s really important to empower women of color, and for us to understand if we’re not the ones standing up for our own and for ourselves, and to understand that all of these three factors of economic, racial and gender inequality really impact our lives every single day.

KIM BROWN: You know, women have been organizing on the frontlines as evidenced by International Women’s Day. This is a 100-year-old plus event, so 2017 is obviously not the first time for the Women’s March and Strike. But 2017 is punctuated by so many different issues, stuff that people have not seen or dealt with really in several generations, well, depending on, I guess, what your perspective is. So tell us about… what were some of the main takeaways from Wednesday’s March and Strike? What are women’s marching orders going forward, not only dealing with the Trump administration, but the continued inequities that women deal with all the time?

ERIKA ANDIOLA: Yeah. I think we have to take power into our own hands, and unfortunately… I mean, you can look at it from different angles. I think a lot of women are ready to run for office, right? A lot of women are ready to take power in the federal government or the local government, and we need to do that more often. I mean, look at the Senate, look at the House. We’re still a minority, especially women of color, we’re still a minority at the federal level. I think it’s a huge part of how we can take power and change policies that affect us, whether it’s controlling our own bodies, or whether it’s earning more money, or being able to have more protection for women who are abused. I think it’s also really about raising that awareness and that empowerment, like I said before. You know, a lot of women really need to feel empowered enough to say “I can make change in my community and I have to step up”. And I’m really happy to see that, that there’s a lot more ladies who are out there being able to do that, including our transgender women, who go through a lot of the same struggles and perhaps even worse than women overall.

KIM BROWN: Indeed. We’ve been speaking with Erika Andiola. She is an undocumented immigrant rights activist. Erika is also currently the political director for Our Revolution. She’s joined us today from Phoenix, Arizona. We’ve been talking about International Women’s Day and how it intersects with the resistance against Donald Trump’s harsh immigration policies. Erika, we appreciate you joining us today. Thank you.

ERIKA ANDIOLA: Of course. Thank you for having me.

Erika Andiola is the Government Relations Director of the DREAM Action Coalition in Phoenix, Arizona. She was brought to the U.S. at the age of eleven and does not have legal documentation; she lost her university scholarships when Arizona passed laws affecting immigrants. With employers afraid to hire the undocumented, she hasn’t been able to…