Recent human rights reports show that murders of social leaders have skyrocketed since Colombia’s right-wing President Ivan Duque came into office in 2017. Activist Manuel Rozental speaks to us about the situation from one of the most affected areas

Recent human rights reports show that murders of social leaders have skyrocketed since Colombia’s right-wing President Ivan Duque came into office in 2017. Activist Manuel Rozental speaks to us about the situation from one of the most affected areas 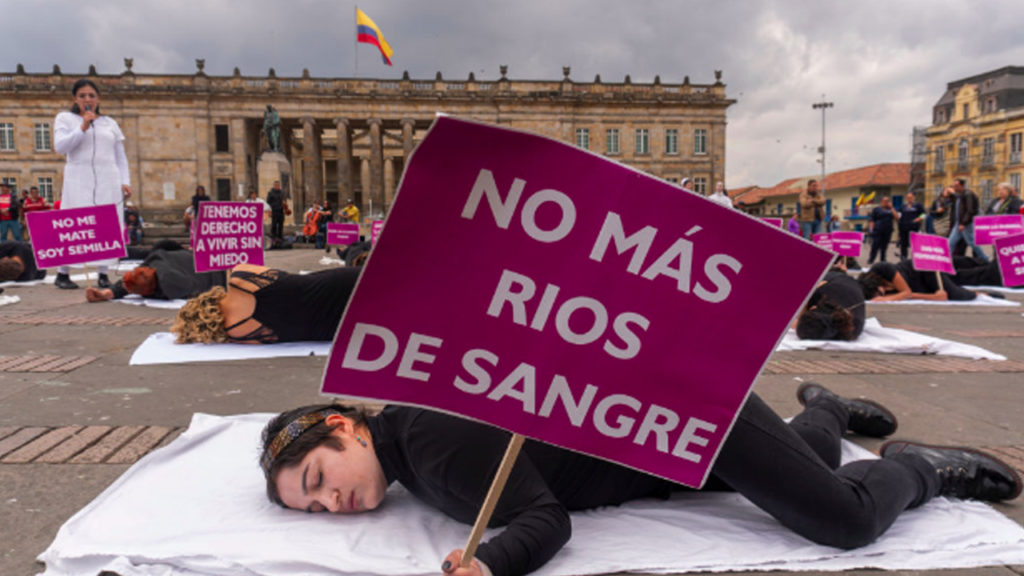 GREG WILPERT It’s The Real News Network and I’m Greg Wilpert in Baltimore. Over 700 social leaders and 135 former rebel fighters have been killed in Colombia since the signing of the peace agreement between the Revolutionary Armed Forces of Colombia, the FARC, and the government of Colombia in January 2016. This is according to a just-released study by the political movement, Marcha Patriotica, or Patriotic March, and the Institute for Development and Peace Studies, INDEPAZ. Most of those killed, about 500, were campesino leaders, Indigenous leaders, Afro-Colombian leaders, and community leaders.

Meanwhile, the Colombian human rights group, Somos Defensores, reported last month that following after a year of relative calm in 2017, 2018 saw violence against social leaders increase by 44 percent. And for 2019, violence has so far increased by 66 percent, relative to 2018. Most of these killings have been attributed to right-wing paramilitary forces and to Colombian state security forces. Just last week, The New York Times reported that the military had ordered a doubling of the number of military missions against guerrilla fighters and organized crime. This week, though, the military had to retract that order when it raised questions about possible increases in human rights violations. Joining me now from Cauca, Colombia where most of this violence actually has been taking place, and to look at the state of violence in Colombia’s fragile peace agreement, is Manuel Rozental. He is a Colombian activist, physician, and practicing surgeon, and has more than 40 years of involvement in grassroots political organizing with youth, Indigenous peoples, and urban and rural movements. Thanks again for joining us today, Manuel.

MANUEL ROZENTAL Thank you, Greg. And thank you for the interest.

GREG WILPERT So let’s start with looking at the very dramatic increase in killings of social leaders over the past two years. Why has this increase been happening? What are the factors for it?

MANUEL ROZENTAL The obvious is that—The first thing one has to ask is who would benefit from these killings and who would be capable of doing them? If you look at the same report, you’d see that the entire geography of Colombia is covered and that very specifically, leaders of social movements, organizations, men and women throughout the country who are defending the territories and resources from transnational corporate extractive industries, have been targeted. Now who has the capacity to target everybody everywhere so specifically and so sharply once FARC is removed from the picture? And the answer is obvious. The answer is, only the Colombian intelligence and armed forces can do it. What for? Well, specifically because those resources and territories are of interest to investors and transnational corporations. So the war with FARC may be over, but the war against Mother Earth and the people of Colombia is not over. In fact, it’s increasing. That’s what the reports are showing.

GREG WILPERT Now, FARC leader, Ivan Marquez, has recently come out expressing regret that the FARC disarmed. And since then, he’s basically saying that there have been so many unfulfilled elements of the peace agreement and so much violence against former FARC fighters. What for you are some of the most important aspects of the peace agreement that the government of President Ivan Duque has left unfulfilled?

MANUEL ROZENTAL Everything. The government of Ivan Duque has clearly stated, and his political party and former President Uribe, who is the president of Colombia, have stated that they would dismantle and destroy the peace agreement. And they have proceeded to do that even though they keep repeating they’re in favor of peace. In fact, President Duque has tried to transform the peace agreement as a rendition by FARC. They have given up their arms, they’re the criminals, and the government of Colombia— the other side of the war and the worst side by every account— is actually to be treated as the generous side that gave the bandit an opportunity. And so, they haven’t kept any part of the agreement. There are assassinations of FARC members throughout the country. There are—No part of the peace agreement has been kept seriously and even those who arrived at the Congress are treated as bandits all the time, so no. No, the peace agreement between FARC and the government has not been kept, and it was always to begin with a poor agreement anyway.

GREG WILPERT So, and this is kind of something that speaks to what you just mentioned, one of the main peace negotiators, known as “Jesus Santrich,” was arrested for drug trafficking last year under an order from a US court. Now, since then, he has been released, actually very recently, on a Colombian court order which said that there is not enough evidence to hold him. Tell us a bit about his case. How is it emblematic of what’s going on and does it give hope that Colombia’s judicial system, at the very least, is acting independently of political pressures?

MANUEL ROZENTAL Yes. The first thing I must tell people there, who are far away from here, is that President Duque yesterday called Santrich being released by the highest court in the country, he called him, he is a mafioso, he’s a member of the Mafia. So, President Duque is above the law. He ignores the law, so this is what’s behind this case. Santrich is accused with manipulation as being a drug trafficker. There is no proof against him. The US requires his extradition, he’s not extradited, and then he’s found “not guilty” by the highest court. But the government wants to find him guilty and it is emblematic because there is no proof against Santrich. He has not gone due process, but on the other hand, if anyone can be prosecuted with sufficient evidence in the US and in Colombia for drug trafficking, it’s actually President Duque’s boss, Alvaro Uribe Velez.

What’s going on here is actually President Duque is trying to achieve immunity for President Uribe for the very crimes he’s accusing Santrich of, but it didn’t work. President Duque had to back off. The highest court in Colombia stopped the extradition and released Santrich from jail, but it is most likely in the US where you’ll find the answer for this. It’s a hypothesis, but the most possible one. You mentioned The New York Times piece. The New York Times piece, I think, had a major influence on this decision. The government of Colombia, the highest official of the Colombian armed forces, were all exposed as a fascist regime— orders to assassinate everywhere, orders for immunity and impunity for government officials and army commanders killing people, and orders to destroy social movements everywhere.

Duque’s plan and Uribe’s plan was openly a state of siege. Take over the judiciary. Take over the Congress. Shut them down on the excuse of Santrich’s case and another jurisdiction for peace, and doing that, doing a coup, was their plan, and then giving the army commanders all the power to attack people everywhere. They had to back off and one of the main reasons here that this is not a scandal in Colombia, but which they don’t care, but it is a scandal now in the United States after The New York Times article came out. The change in position of President Duque, the release of Santrich, happened almost immediately after it was known in the US that the fascist regime, at the service of the US, is exposed to the US public. So it does play a major role, in my view.

GREG WILPERT So that brings me to a related question. What exactly has been the role of the Trump administration in the peace process and the increase in violence?

So, there is a militarization of the country everywhere, there’s support for the armed forces, and actually, the intent on entering Venezuela potentially with an all-out American war, South American and North American war, has increased the pressure from the US over the Colombian military options. Following Rumsfeld’s model, following the model that was established of a corporate army in the US, all armies in Latin America, particularly the Colombian Army, is a corporate army. In other words, it profits financially from war and it sells its services to different actors— be it transnational corporations, or be it drug-trafficking cartels, or others. What is being exposed now is a massive corruption of the armed forces that makes money from killing people and this model of assassination for profit is actually the main influence of the US on Colombia. We cannot have peace here because we have corporations, including the army, working for profit in every regard and in a Mafia-type state and country.

GREG WILPERT Okay. Well, unfortunately, we’re going to have to leave it there for now, but we’ll come back to you soon as the situation develops. I was speaking to Manuel Rozental— Colombian activist, physician, and practicing surgeon based in Cauca, Colombia. Thanks again, Manuel, for having joined us today and keep safe.

Emmanuel Rozental is a Colombian activist, physician, and practicing surgeon with more than 40 years’ involvement in grassroots political organizing with youth, indigenous peoples, and urban and rural movements. He has been exiled several times to Canada for political activities. Academic in social and political sciences, strategist with social movements throughout the Americas and beyond.