China's military has developed a new strategy paper that emphasizes the need to keep Hong Kong and Taiwan. Does this signal a new military assertiveness from China? Or is it a reaction to US foreign policy?

China's military has developed a new strategy paper that emphasizes the need to keep Hong Kong and Taiwan. Does this signal a new military assertiveness from China? Or is it a reaction to US foreign policy? 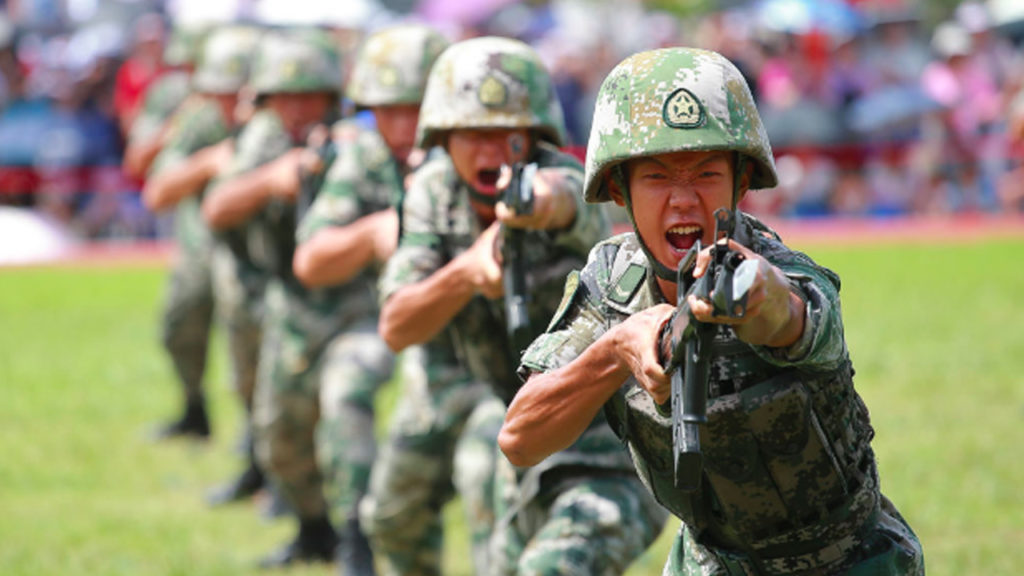 The issue of whether China intends to send troops into Hong Kong to repress the wave of protests happening there at the moment came to the forefront last week when China’s Ministry of Defense released a new strategy paper outlining exactly such a possibility. The white paper mentions that the agreement between China and Hong Kong allows China to garrison 14,000 troops in Hong Kong. The 69-page strategy paper is now being presented as proof of China’s imperial ambitions. Also, because it mentions the possibility of a military intervention in Taiwan in case there is an effort to formalize Taiwan’s independence. Wu Qian, the Spokesman for the Chinese Ministry of Defense, presented parts of the white paper at a press conference last week.

WU QIAN, CHINESE SPOKESPERSON However, we must resolutely point out that engaging in Taiwan independence is a dead end. If anyone dares to try to separate Taiwan from China, the Chinese Army will not hesitate to go to war to defend the sovereignty, unity, and territorial integrity of the country. The white paper emphasizes that there’s still a wide gap between China’s Defense expenditure and the requirements for safeguarding national sovereignty, security, and development interests for fulfilling China’s international responsibilities and obligations as a major country and for China’s development. As such, it will maintain a moderate and steady growth.

GREG WILPERT Is there a real change in Chinese military policy, or is something else at play? Joining me now to explore this issue is Adam Ni. He’s a China Researcher at the Department of Security Studies and Criminology at Macquarie University, Sydney and he joins us today from Berlin, Germany. Thanks for being here, Adam.

GREG WILPERT So do you see any real change in China’s military policy in this white paper? And if so, what is it?

ADAM NI I think in terms of substantive strategy, we don’t see any change. A lot of that stuff has already been pronounced by the Chinese government in the past, but I think there are a number of new things that have been made very clear in the latest white paper and I’ll list the top four. So the first is a real sense of antagonism towards the United States. I guess that’s a manifestation of more recent geopolitical trends, as well as heightened tension between US and China, but it comes very clearly through the white paper that China sees competition with the United States as a major national security issue. And that antagonism  comes through.

The second is separatist issues or what China considers to be separatist threats. And the white paper makes it clear that these threats are to be considered a priority in terms of China’s security challenge. The third one is a real emphasis on China’s overseas interests, and in recent years that has been growing. And the white paper emphasizes the need for China to develop military capabilities that are able to safeguard its expanding portfolio of overseas interests. And finally, we see this emphasis of political loyalty of the armed forces to the Communist Party under Xi Jinping, so that also comes through very clearly.

GREG WILPERT Now, one of the things that it also mentions is to upgrade cooperation with Russia and mentioning that the Chinese military would support Chinese operations overseas to support its economic interests, and possibly even the One Belt, One Road project. Is China slowly building a network that could challenge NATO’s hegemony? What’s the trend here?

ADAM NI I think certainly China’s power is growing in the field of economics, but also diplomatically and militarily. I don’t think China is challenging NATO, but certainly China’s growing power and its increasing cooperation with Russia, which really started to take off in the mid-2010s and has really taken off lately due to the fact that both countries are under pressure from the United States. And both countries see it’s in their benefit to cooperate with each other as to gain more leverage vis-a-vis the United States. So I certainly see China’s growing power, as well as its increasing cooperation with Russia, of having the effect of shifting the balance of military power in Asia in favor of China against the United States and its allies; such as Japan and its partners in the region. And this really matters because it could well change US and allied calculations when considering say whether to intervene in a Taiwan scenario, or say a contingency in the disputed South China Sea.

GREG WILPERT Yeah. So that’s actually my next point. China is currently spending the smallest proportion of its GDP on defense compared to all members of the Security Council. But the white paper also promises to increase defense spending. So the question is, the reason for China’s economic—I mean, in the past, the reason for China’s economic success was that it was able to devote so many resources towards industrial development actually and not wasting it really on military buildup. So what kind of military threat exists now which could convince the Chinese government to risk its economic advantage in order to build up its military?

ADAM NI Yeah. I think it’s important to note that the white paper repeatedly emphasizes that by a number of different measures that China is not actually spending a lot of money on its military, and it makes an effort in trying to convince the audience of that. These measures include, as you mentioned, defense spending as a proportion of GDP, for example. But really, I think it’s the absolute amount that matters, right? So it’s not relevant what percentage of your income you spend on buying weapons. For me, what’s interesting is how much — how many guns are you buying, so to speak. So the growing, I think, in the military spending will continue and it will continue in the high digits, in somewhere around the 7% mark. And over the long-term, I think that figure would drop to converge with GDP growth, which means that really defense spending for the Chinese military is going to grow much faster than the defense budget of most developed countries— if not all— and that’s going to have a cumulative effect over time.

So for the Chinese government, it perceives that there is a variety of internal and external threats that justify these big investments, this increase in spending. And in the mind of Beijing, China’s long-term economic development needs to be safeguarded by a strong military. So for example, China has an expanding portfolio of overseas interests, economic interests, especially along the networks of the Belt and Road Initiative. And this in Beijing’s mind needs to be safeguarded by hard powers. So hard power, soft power, economic development— they all go hand-in-hand and they’re a complementary, so it’s not a matter of one or the other.

GREG WILPERT Okay. Well, we’re going to leave it there for now. I’m speaking to Adam Ni, China Researcher at the Department of Security Studies and Criminology at Macquarie University, Sydney. Thanks again for having joined us today.

Adam Ni is a researcher on China in the Department of Security Studies and Criminology at Macquarie University, Sydney.