The oil spill spans 10 states and contaminated 1500 miles of coastline. The Real News rides with a group of coastal defenders battling the spill.   Photo and drone images of the beach clean-up courtesy of Mateus Morbeck.

The oil spill spans 10 states and contaminated 1500 miles of coastline. The Real News rides with a group of coastal defenders battling the spill.   Photo and drone images of the beach clean-up courtesy of Mateus Morbeck. 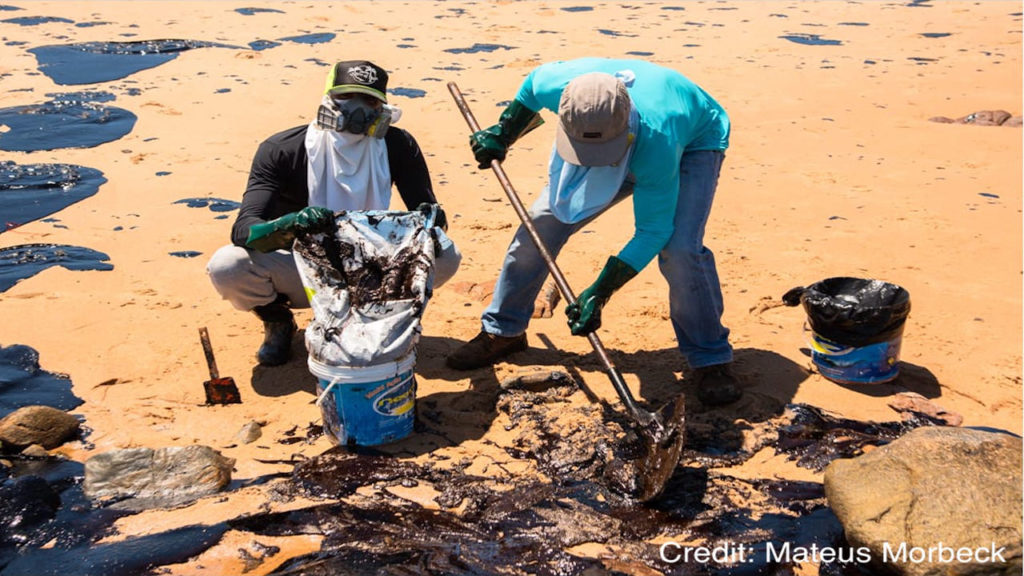 MICHAEL FOX: This is Miguel and Barbara, two members of the Guardioes do Litorial, or the Coastal Guardians. That’s a group of more than 200 volunteers that self-organized in the state of Bahia over WhatsApp a couple of months ago to respond to the disastrous oil spill that has been covering Brazil’s coastline.

The spill has impacted more than 600 locations over 10 states, stretching 1500 miles. It’s mindboggling. And it’s far from over. The Brazilian government says that 4500 tons of oil debris has now been cleaned. But there is so much more. We’re headed North, from Bahia’s capital Salvador. We pull off the main road toward the town of Diogo. First stop. We’re dropping off equipment. Government cleanup crews and teams of volunteers have been tackling the oil since it first appeared two months ago. But many did so without adequate tools to protect themselves.

And oil, it’s toxic. In the short term, contact with the stuff, which lets off fumes of benzene, can cause headaches, shortness of breath, nausea, and diarrhea; in the long term, cancer. It’s not good. The guardians have been collecting donations of equipment and they’re sharing them with people looking to lead teams to clean-up the coast. People like Digão.

RODRIGO “DIGAO” GASPARINI: Yea, this 4 kilometer stretch is bad off, because no one goes there. Lots of bits of oil, and I’ve been picking them up little by little.

MICHAEL FOX: He’s walked the whole Northeastern coast of Brazil. But that was before the spill.

RODRIGO “DIGAO” GASPARINI: When an area near the city gets hit with oil, people get together and they pick it up. But when it’s far from the city, the oil stays there. It’s just stuck. I’m someone who likes pristine nature. Those are the most beautiful spots, and right now I can only imagine they are covered in oil, because no one is there.

MICHAEL FOX: They leave him with masks, gloves and other gear. And then we’re off, headed North to the village of Subauma. Today’s not a cleanup day. We’re here to check the status of the spill, particularly in the mangrove forests north of town. We don’t expect to see much oil here. We’re wrong.

MIGUEL SEHBE Look. Look at that.

MICHAEL FOX Beach-goers swim in the pools next to rows of drops of oil that came in on the tide. The endless lines of oil run for miles up and down the coast. Most will never be picked up, eventually drifting to sea, washing up on another shore, or being buried in the sand, leaching toxic components, potentially for years.

MICHAEL FOX That’s Deraldo Santana Brito. He’s our guide. We roll over the beach, the heavy tires kicking up pieces of oil and flinging them into the air, mile after mile. North of town, oil slick covers many of the tide pools.

MIGUEL SEHBE: This is the most evil oil right here because it dissolves and there is a very high presence of the hydrocarbons.

MICHAEL FOX: It’s mixed with shells and the rocks. It clings to the mangroves. These are sensitive ecosystems. Home to oysters and crabs, and the birthplace of many fish. Very few of these mangrove forests up and down the Brazilian coast have been cleaned. Meanwhile, old oil still covers the rocks alongside tide pools, where beachgoers swim.

DERALDO SANTANA BRITO: It’s going to continue until they figure out what’s causing it. And they haven’t figured it out yet. It’s really hard.

MICHAEL FOX: Thicker globs of oil are still washing up on beaches around the country. Just not here. Not right now.

BARBARA SILVA: We’ve seen some really severe situations over the last two months, with very big globs of oil. And now you can see that there are still these small remnants which are no less harmful or toxic.

MICHAEL FOX: This is the reality of Northeastern Brazil. It’s just one beach along a coastline stretching 1500 miles.

September 26, 2019
Sign Up for Our Newsletter
Help Us Make Real News!