As the death toll from a Taliban assault on the Afghan city of Ghazni passes 300, journalist and author Ahmed Rashid says the attack underscores the the ineffectiveness of the US-NATO-Afghan government coalition, and the urgent need for talks to end the nearly 17-year war

As the death toll from a Taliban assault on the Afghan city of Ghazni passes 300, journalist and author Ahmed Rashid says the attack underscores the the ineffectiveness of the US-NATO-Afghan government coalition, and the urgent need for talks to end the nearly 17-year war 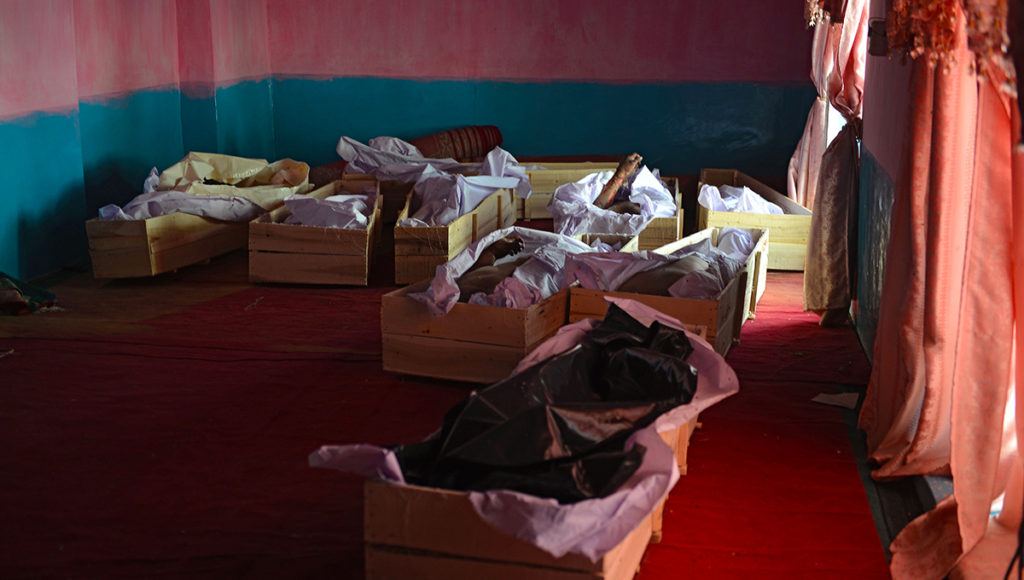 The death toll from a Taliban assault on the Afghan city of Ghazni has passed 300. U.S. warplanes have reportedly killed dozens of Taliban fighters in a series of air raids in support of Afghan forces. The fighting in Ghazni has cast doubt on the prospects for peace talks to end Afghanistan’s nearly 17-year war. Just last month, the U.S.-led coalition said it’s prepared to speak to the Taliban.

JOHN NICHOLSON: And our Secretary of State, Mr. Pompeo, has said that we, the United States, are ready to talk with the Taliban and discuss the role of international forces. And we hope that they realize this, and that this will help to move the peace process forward.

AARON MATE: Joining me is Ahmed Rashid, journalist and best selling author. Welcome, Ahmed. If we could start with what’s happening in Ghazni. What do you see as the goal of this Taliban offensive on the city, and what have you learned so far about what is taking place? There are reports of bodies in the streets, massive suffering as this fighting intensifies.

AHMED RASHID: I think all reports are accurate, and it’s a terrible situation. There’s only one hospital in Ghazni, and it’s overwhelmed and overloaded with wounded. The dead have been brought to the hospital as well. It’s a very, very critical situation. This is the fourth day of fighting. And clearly the government forces and reinforcements have arrived. They have still not been able to clear the city of the Taliban.

Clearly, you know, this Taliban attack, I mean, is nothing unusual. Firstly, there have been four attempts in the last year or so of the Taliban trying to capture a provincial capital. Ghazni is the provincial capital of the province of Ghazni. And the importance of Ghazni is that it’s just less than 100 kilometers from Kabul. It straddles the key road between Kabul and Kandahar. Capturing this and blocking all the roads would really lock up the country, because you wouldn’t have access to the south and the north.

Now, there’d been attempts before to capture Kunduz in the north and Faryab in the west. Just three, four months ago we saw such intent. But I don’t think we’ve seen such thoughts towards such a coordinated attack. Remember, there are three or four major offensives going on by the Taliban apart from Ghazni in other parts of the country. And secondly, we haven’t seen this kind of Taliban manpower in the field before. There are several thousand Taliban involved in these simultaneous attacks.

AARON MATE: So what is the meaning of this, following reports that there has been a reversal in U.S. policy? Just last month it emerged that, according to a credible sources reported by The New York Times, that U.S. representatives have met face to face for the first time with Taliban representatives. So does this attack signal to you that the Taliban is not interested in peace talks? Or is it, perhaps, just trying to increase its leverage in any future discussions?

AHMED RASHID: It should have been clear to the Afghan government and to the Americans that clearly before any any peace talks, or even before the next ceasefire, which is scheduled to be carried out on August 22 when there’s a religious festival, the Taliban would launch attacks and try and improve their military position. And that’s exactly what they’re doing.

They’re trying to strengthen and outsmart the government and the Americans in improving their military situation. They may have taken a lot of losses, but they’ve also shattered morale in the Afghan army, and possibly in the international community, as well. This attack is going to lead to a lot more countries and outsiders saying we should just give up on Afghanistan.

Now, I think the-. So the real crisis is that the government seemed unaware that such an attack would come, whereas I think everywhere there’s peace talks there’s talking and fighting going on at the same time. And I think the Americans and the government should have prepared the armed forces, the country, the population, for just such an attack. And it never happened, unfortunately. President Ashraf Ghani was taken by complete surprise, and it’s taken two days or more for him to realize how serious the situation is in Ghazni.

AARON MATE: And so what does that apparent lack of readiness and awareness tell you, then, about the state of Ashraf Ghani’s government and of the U.S.-led military coalition, now, as I said, approaching the 17th year of this war?

AHMED RASHID: Well, I think, you know, on the government side there seems to be total chaos. And some of the stories going on of even the reinforcements being sent from Kabul to Gazhni, they speak of complete chaos, and the government really not knowing what, what they’re doing. And I said before, they should have been prepared for just such an attack. Unfortunately, I think the intelligence on the military side is also obviously very poor. How did two to three thousand Taliban amass outside Ghazni without some kind of pre-warning, or without raising the awareness of the intelligence, both American intelligence and Afghan government intelligence?

I mean, what we’ve seen has been a huge failure on all sides. And subsequently, of course, there’ve been other huge attacks, with hundreds of Taliban amassing in other parts of the country to attack their targets. And that seems to have been no pre-warning, no intelligence about the fact that so many Taliban-. I mean, my own estimate is that perhaps in this offensive you’ve got between 3000-5000 Taliban involved. Imagine the supply lines, the ammunition, the food, and all the, all the bits and pieces of a military offensive. And there seems to be no awareness that this was coming.

AARON MATE: If there are peace talks, do you think that the Afghan and U.S. governments are possibly resigning themselves to a strategy of basically trying to keep control of the major urban centers, and then effectively conceding the the rural, provincial areas to the Taliban?

AHMED RASHID: Well, I think that policy has been very active for quite some time. For many months, I would say. Ever since last year, when the Taliban tried to take Kunduz and Faryab, other provincial capitals, the reaction of the Afghan government and the Americans has been simply to try to hold on to population centers and, vitally, keep the roads open, because the roads shut down, then garrisons are isolated, and they become relatively much easier to be attacked by the Taliban.

So what we’re seeing now is actually a failure even that policy. And population centers are being attacked with such brutality, and with such force, and with such large numbers of insurgents, that clearly even that strategy of protecting the civilian population is futile. We don’t know in Gazhni how many civilians have been killed, but I’m sure that many, many have been killed. At the moment we are getting our figures for, and these very doubtful, but figures for military personnel, who have been taken into hospitals and are being looked after.

AARON MATE: Finally, Imran Khan, who’s about to become the next prime minister of Pakistan, what significance does that carry for what is happening in Afghanistan? Will him being at the helm in Pakistan have any impact on the war in Afghanistan?

AHMED RASHID: Unfortunately, my information is that, you know, despite the promises made by Pakistan, that they would be helping the peace process, and they would be calming the Taliban, and leading them into, helping them get into the peace process, remember that the Taliban leadership is based in Pakistan. And there have been very severe differences between Pakistan and NATO and the Americans because of the support that in the past has been given to the Taliban by Pakistan.

Now, obviously this huge offensive with the supply lines that the Taliban seem to have constructed without anybody knowing about them all point the finger to regional allies of the Taliban, who may well have been helping them get supplies. And that is not just Pakistan, but also Iran, which has been closely involved in the dialogue with the Taliban, and Russia. Russia, in order to protect Central Asia, has also been talking to the Taliban.

So unfortunately, there is a complete lack of regional solidarity, and that’s something that the Americans and NATO and other players shouldn’t be carrying out on behalf of the Afghan government, to make sure that the regional countries are playing ball. And we’re not seeing that happen at all.

AARON MATE: Why do you think that is?

So Russia says it wants peace and stability in Afghanistan. But it has been supporting the Taliban, according to U.S. intelligence. The Russians have been giving night vision goggles to the Taliban, and other sophisticated armaments. If that is the case, then we really do have a very serious regional problem, where none of the regional countries are really playing fair and square with the Afghan government, or with the Western alliance.

AARON MATE: And continuing to treat Afghanistan as basically a site for a proxy war between all these different powers, as has been the case for the last four decades, at least.

AHMED RASHID: Yeah. I mean, we, we-. This war, remember, has been going on since 1979, when the Russians invaded Afghanistan. It’s the longest war in anyone’s memory. Three times as long as the Second World War. And certainly the longest war the Americans have ever faced.

And unfortunately, what has really been missing in the last part of this war- in other words, since 9/11- has been a real attempt at regional diplomacy, bringing the regional countries together, putting pressure on the Taliban and the government to talk. The Americans are talking about peace talks without really having any political or geopolitical strategy in the region. Where are the American diplomats who should be moving from country to country to win over the support of the regional countries towards the peace process? None of that is really happening.

And I think, you know, that is going to-. In fact, what we’re seeing is the Taliban are moving around much faster. A Taliban delegation has just been to Uzbekistan in Central Asia just a few days ago, opening up relations with Uzbekistan. They’ve been in China, trying to improve relations with China. They’ve been in Iran. And these were the publicly announced delegations that have gone to visit these countries, not what is happening under the carpet.

And thank you for joining us on The Real News.